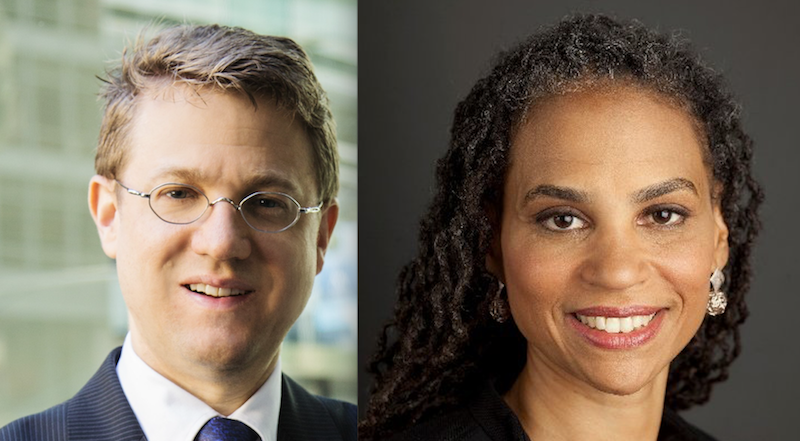 BY LINCOLN ANDERSON | Aaron Foldenauer, a candidate for mayor, is calling out a rival — for making too much money — even as he refuses to say how much he earns himself.

Foldenauer, who ran for City Council in Lower Manhattan’s District 1 four years ago, accused Maya Wiley of being paid more than $250,000 in a single year by the New School for her position, senior vice president for social justice, after leaving the de Blasio administration.

Meanwhile, The New School has been beset by financial difficulties during the pandemic and laid off more than 100 clerical workers and staff this past October, he noted.

Foldenauer this information on Wiley was found during a review of a publicly available IRS 990 form filed by the New School for the year ending June 30, 2018.

“For Maya Wiley to exploit progressive causes as a money grab is contrary to the very social-justice issues for which she claims to advocate,” Foldenauer said. “The average income of a New York City resident is less than $40,000 per year. While Maya Wiley raked in over a quarter of a million dollars in a single year, our children were overwhelmed with student loan debt and average New Yorkers were struggling.”

According to Wiley’s LinkedIn page, she was senior vice president for social justice at the New School for more than three years, from July 2016 through September 2019, after which she has continued on at the New School as a professor. Before coming to the New School, Wiley was Mayor de Blasio’s counsel for two and a half years.

While being paid by the New School, Wiley also was a television analyst for MSNBC, allowing her to earn more income, Foldenauer noted.

“Students at the New School are being gouged with tuition bills mounting to approximately $50,000 per year while administrators like Maya Wiley are getting a huge payday,” the candidate accused. “Worse yet, in October 2020, the New School laid off over 100 clerical workers and staff.

“Maya Wiley’s ploy to capitalize on her position in the de Blasio administration by taking more than a quarter of a million dollars per year from the New School shows that she is unfit to be the next mayor,” Foldenauer charged.

Wiley did not immediately reply to a request for comment. However, she did respond to Foldenauer’s accusation during a mayoral candidates forum hosted by the People First Democratic Club, a Bronx political club, on Fri., Jan. 22.

“I was grateful for that position,” Wiley said of the senior V.P. job at the New School. “I earned it. And I earned it with 30 years of career as a civil-rights lawyer and advocate for racial justice.”

Speaking at the Zoom candidates forum, Wiley also touted the fact that she had set up a “digital equity library” and center at the Milano School of Policy, Management and Environment. In addition, she noted she had fought to ensure that the university’s cafeteria workers kept their jobs.

“I will stand by my time at the New School as proud time,” she stated.

Meanwhile, the Village Sun requested that Foldenauer, an attorney, divulge his own annual income — but he refused.

“Well, I’m not the one who took advantage of a position in power to, in turn, get a cushy position at a university,” he said, initially.

He noted that Wiley’s New School salary is publicly available since the university is a nonprofit.

Asked a second time if he would divulge his income, he said, “I’m willing to talk about that after the media takes my candidacy seriously — and once I get invited to all the leading debates.”

“I haven’t received an invitation yet and I ran for Council for years ago,” he complained.

Originally from Virginia, Foldenauer has lived in the Financial District for 15 years. His Web page describes him as “a veteran of New York City politics.” However, he has never held elected office.

He finished third in the four-way Council District 1 primary race in 2017 that saw incumbent Margaret Chin narrowly fend off upstart Christopher Marte. Chin got 46 percent of the vote to Marte’s 44 percent. The slim difference — 222 votes — was less than the 734 votes Foldenauer got. As a result, Foldenauer, along with Dashia Imperiale, who came in fourth, were viewed as spoilers, allowing Chin to win reelection to a third term.

Yet, asked about being branded a spoiler in that contest, Foldenauer this week claimed his candidacy actually helped Marte by protecting him from Chin.