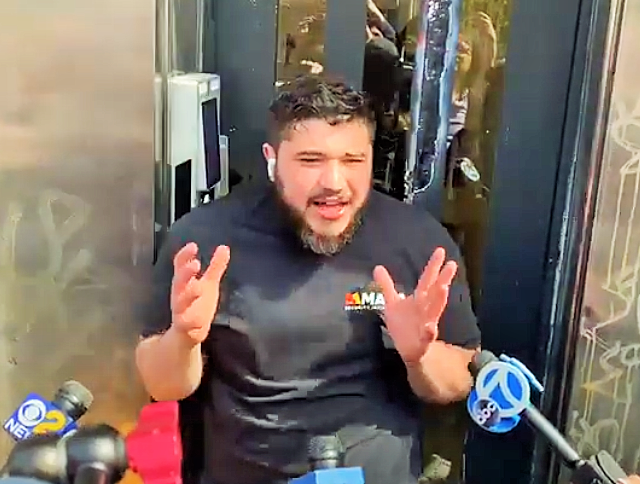 Zack Tahhan, 21, spotted subway shooting suspect Frank James on First Avenue in the East Village Wednesday and alerted the police, who arrested James soon afterward. Although police and Crime Stoppers are not officially commenting, apparently he will be getting a $10,000 reward from Crime Stoppers. (Screengrab from video by Carter Booth)

The five will split the $50,000 Crime Stoppers reward money for helping catch the suspect, Frank James, on Wednesday.

Due to the strict anonymity of the Crime Stoppers hotline, there was no official confirmation as to who these individuals are. Most media outlets could only speculate. But the Daily News was able to confirm four of the five.

The Police Department on Friday, along with the Metropolitan Transportation Authority, the Transport Workers Union Local 100 and the New York City Police Foundation, announced that, out of the many individuals who sent in tips, five people who provided critical information leading to the shooting suspect’s capture will share the combined $50,000 reward.

After the chaotic Brooklyn underground attack, the police issued a plea for help in locating the gunman, who had by then already been identified by detectives thanks to having left evidence in the subway car that he shot up.

Detectives traced the many tips that streamed in and “constructed a timeline of events” leading to James’s arrest early Wednesday afternoon at First Avenue and St. Mark’s Place in the East Village. Members of the department’s Detectives Bureau identified five individuals whose information contributed directly to James’s arrest, which was made around 30 hours after the mass attack.

It wasn’t immediately clear, though, if two East Village Samaritans who spotted James on First Avenue ever actually called or texted their tips to Crime Stoppers, which is a separate organization from the New York Police Department. The two men did both alert a nearby officer in person, though.

James had been inside the McDonald’s at First Avenue and E. Sixth Street. He also was spotted charging his phone at a nearby WiFi kiosk.

Zack Tahhan, 21, a security-camera technician, who saw the suspect walking along the avenue and flagged down a nearby cop, said he recognized James’s face from an alert he received on his cell phone.

Similarly, Francis Puebla, a manager at Saifee Hardware, also noticed James and, like Zahhan, alerted an officer in a police car stopped at a red light.

Afterward, both Tahhan and Puebla gave video interviews to reporters and others that were widely viewed.

After alleged subway shooter Frank James’s arrest on Wednesday in the East Village, Zack Tahhan spoke about having spotted the suspect nearby and flagged down a police officer. (Video by Carter Booth)

The $50,000 Crime Stoppers reward includes contributions from the Police Foundation, the M.T.A. and T.W.U. Local 100.

As usual, the Crime Stoppers money will only be distributed upon the suspect’s arrest and indictment. So far James has only been charged, though it’s hard to imagine how he would not be indicted — especially since he himself reportedly called in a tip that he was in the McDonald’s, telling cops he knew they were looking for him.

A police spokesperson said that any Crime Stoppers reward money would only be given to persons who had contacted the hotline. She explained that since Crime Stoppers safeguards tipsters’ anonymity, police could not reveal their identities. As for whether Tahhan or Puebla might be elegible, she said it’s conceivable detectives could have subsequently interviewed both men and advised them to contact Crime Stoppers.

“It’s a bit unusual,” she said of this particular situation.

If someone wanted to make a public statement about receiving part of the reward, that would be up to the individual, the spokesperson added.

A Crime Stoppers staffer who answered a call from The Village Sun seeking clarification said she could not offer any information — and promptly transferred the call to the Police press department. Sounding a bit flustered, apparently she was fielding a flood of media calls about this on the heels of the mayor’s announcment of the five-way reward.

However on Friday evening, Tahhan eventually responded to a Facebook message query from The Village Sun asking him if he would be getting a portion of the reward money. Yes, he said, he would be — though added that he had not contacted Crime Stoppers.

“Yes I No I don’t do anything yet,” wrote Tahhan, who is a Syrian immigrant.

The Daily News, though, was able to learn from “police sources” — who apparently bent the Crime Stoppers strict anonymity rule in this one case — that Tahhan and two friends who were with him at the time, as well as Jack Griffin, who posted on Twitter after spotting James in front of Dimes restaurant on east Canal Street, were four of the five slated to get rewards. The fifth person apparently may have requested to remain anonymous.

Federal officials have charged James, 62, with a terrorist act. He has been ordered held without bail after an appearance Thursday in Brooklyn federal court.

“The public is who we serve, but they are also often our best partner,” Police Commissioner Keechant Sewell said. “We appreciate all of those who responded to our call for information to locate this suspect, including all of those whose tips did not pan out. We urged the public to join us in this effort to find this suspect and New Yorkers stepped up.”

“Thanks to the help of these five good Samaritans, the N.Y.P.D. was able to do its job and get a dangerous suspect off the streets just hours after his picture was released,” Mayor Adams said. “The bravery of these five individuals is what truly makes New York City the greatest city in the world. Thank you to the M.T.A., the Transport Workers Union Local 100 and the New York City Police Foundation for providing this $50,000 reward.”

“The NYPD is a great partner in protecting millions of subway riders every day,” said M.T.A. Chairperson and C.E.O. Janno Lieber. “Witnesses who came forward with tips that helped detectives and federal agents put away the maniac accused of a horrific attack on our city acted the way we encourage New Yorkers to help each other — See Something, Say Something.”

“Transport Workers Union Local 100 applauds these alert tipsters,” said Tony Utano, the local’s president. “They helped police pinpoint the location of this very dangerous criminal so he could be taken into custody. We now look forward to prosecutors taking the next step: Ensuring he never has the freedom to walk our streets or ride our subway trains again.”

Meanwhile, news reports noted that James, in the hours in between his wild Sunset Park subterranean shooting spree and his arrest, popped in to Katz’s Delicatessan on E. Houston Street for a bite to eat and also hung out for a while in front of trendy Dimes restaurant, at 49 Canal St.

Trigger, who formerly ran the Continental rock club at Third Avenue and St. Mark’s Place, plans to open one of his new Lucky Star ice cream shops near Dimes restaurant and is a huge fan of the hipster ’hood. Asked about the crazed shooter hanging out in “Dimes Square,” he said he wasn’t surprised.

“If it were my last day of freedom, I’d probably go to Dimes and Katz’s, as well, two of my favorite neighborhood spots,” he said. “And then I’d hit Little Canal for coffee and dessert.”