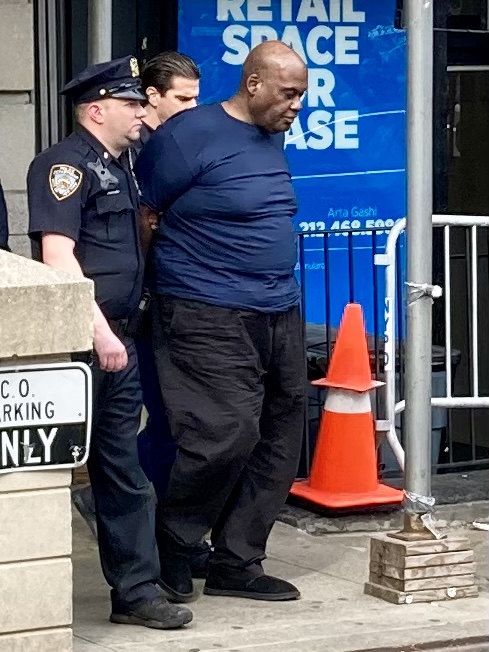 Mass-shooting suspect Frank James was walked out of the Ninth Precinct stationhouse Wednesday afternoon following his arrest in the East Village. (Photo by Carol Puttre-Czyz)

Zack Tahhan recounts spotting the shooting suspect on Avenue A and alerting nearby police. (Video by Carter Booth)

According to the New York Post, James, 62, called the Crime Stoppers hotline himself to report that he would be at the McDonald’s at First Avenue and E. Sixth Street but was gone when cops arrived. They soon found him, though, nearby at First Avenue and St. Mark’s Place, and handcuffed him without incident. He was hit with a federal terrorism charge.

It wasn’t immediately clear if the suspected mass shooter has ties to the East Village or why he happened to be there Wednesday.

Meanwhile, tipsters also had spotted James in the neighborhood and called 9-1-1. Among them was Zack Tahhan, 21, a security-camera technician from New Jersey who was working nearby.

After the arrest, Tahhan was swarmed by a crowd of TV news reporters and citizen reporters — including Carter Booth, a former chairperson of Community Board 2, who videoed his account, above.

The tech said he had been doing a routine check of a store’s cameras when, to his shock, he spotted the alleged wanted gunman walking on the sidewalk right outside. Tahhan said James was toting a bag, which he put down “on the street.”

“I say, ‘People stay away from him! This guy is going to do something!'” he said.

Tahhan said he called out to a nearby police officer.

Tahhan said he hadn’t been able to sleep or work knowing that the shooter was still on the loose.

Francis Puebla, a manager at Saifee Hardware, also spotted James walking on the sidewalk carrying a backpack and, like Tahhan, alerted an officer in a police car stopped at a red light. Stacie Joy videoed Puebla’s account for EV Grieve.

Video shows an officer toting a military-style backpack, apparently James’s, dangling it in his hand by one of its shoulder straps, as James, hands cuffed behind his back, is being put into a police car.

James has posted rambling rants on YouTube in which he decries Mayor Adams and the city’s homeless crisis, says he himself is mentally ill, claims that once the Ukraine conflict ends, an apocalyptic race war will erupt, and wishes for his former enemies to be tortured and suffer.

Mayor Adams, who is under pressure to reduce crime in the city, praised the arrest, saying, “We got him. I want to thank everyday New Yorkers who called in tips, who responded, who helped those passengers who were injured. … We got him.”

“We were able to shrink his world quickly,” Police Commissioner Keechant Sewell said, crediting a public tip to Crime Stoppers for James’s arrest. “There was nowhere else for him to run.”