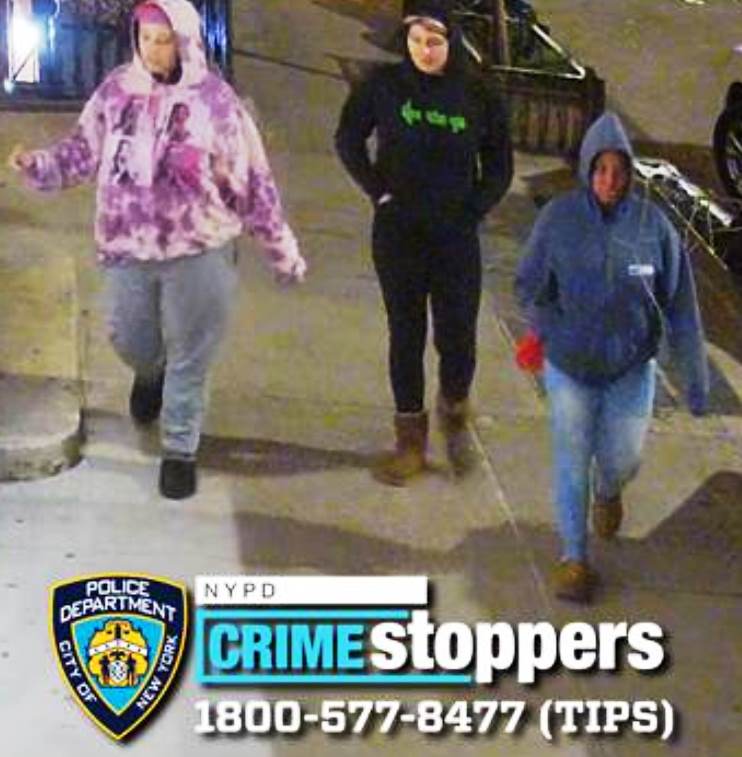 Police say these three women attacked a woman in the Village from behind and stole her cell phone. (Courtesy N.Y.P.D.)

A trio of tough girls struck a woman on the head with a glass bottle in the Village and stole her iPhone, police said.

According to a report, on Tues., Jan. 19, around 8 p.m., the 40-year-old victim was walking eastbound past 25 W. 10th St. talking on her cell phone, when three women unknown to her approached her from behind.

One of the women struck her on the back of head with a glass bottle, causing the victim to fall into a flower box. The attackers grabbed the victim’s iPhone 11-Pro from her hand before fleeing westbound on W. 10th St.

Although the victim sustained a minor injury to her head, she refused medical attention.

Police described the first suspect as weighing about 150 pounds, with a heavy build and standing about 5 feet 5 inches tall. She was last seen wearing a multicolored hooded sweatshirt, gray sweatpants and black boots.

The second suspect weighs about 140 pounds, has an athletic build and is around 5 feet 8 inches tall. She was last seen wearing a black hooded sweatshirt with green words on the front, black sweatpants and black boots, according to cops.

The third suspect was described as a teenager, with a medium build, last seen wearing a blue hooded jacket, blue jeans and brown boots.

Police ask that anyone with information call the N.Y.P.D.’s Crime Stoppers Hotline at 1-800-577-TIPS (8477) or for Spanish, 1-888-57-PISTA (74782). Tips can also be submitted on the Crime Stoppers Web site at WWW.NYPDCRIMESTOPPERS.COM or on Twitter at @NYPDTips. All tips are confidential.