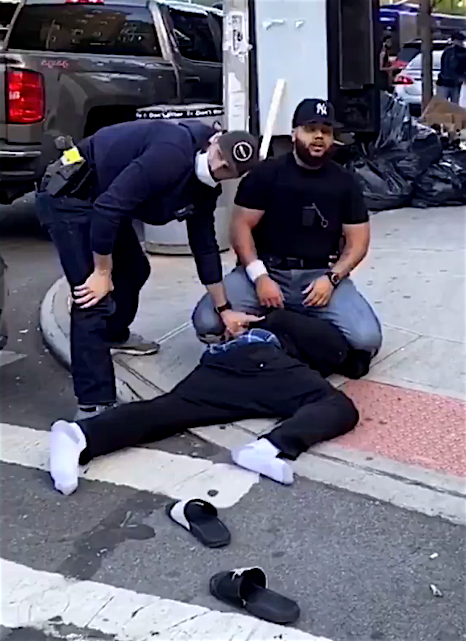 BY THE VILLAGE SUN | Local politicians are demanding that Francisco Garcia face criminal charges for his aggressive arrest in May of Lower East Side resident Donni Wright after Garcia resigned from the force on Wednesday, a day before his scheduled internal disciplinary hearing.

Donni Wright, a groundskeeper with the New York City Housing Authority, was arrested on Avenue D by Officer Garcia, who had pivoted and confronted Wright after arresting someone else nearby for not following social-distancing orders. Since the incident, which was caught on video and went viral, East Side politicians have been demanding charges be filed against Garcia.

In the May 5 incident, as a commotion broke out over the social-distancing arrests Garcia and other cops were making down the block, Garcia’s attention was caught by Wright, who had approached him from behind. Spinning around, he warned the local man to back up and “don’t flex” while brandishing a Taser at him.

Wright instead stepped up toward the cop and flexed his upper body, at which point Garcia quickly slapped and punched him to the ground, dragged him onto the curb and put a heavy knee on his neck and upper back, sitting that way on top of him for less than a minute.

According to the Daily News, Wright was hospitalized and said he would sue the city for $50 million.

Wright is being represented by high-profile attorney Sanford Rubenstein, who, according to the New York Post, said the NYCHA worker suffered a bruised chest and left wrist, a possible fractured rib and thoracic and lumbar disc derangement.

The Post reported that Wright’s mother, Donna Wright, said her son is unable to return to work due to his injuries from the arrest.

“While his not being on the force any longer is important, what’s even more important is him being prosecuted criminally and convicted and going to jail for what he did,” Rubenstein said of Garcia, according to the News.

Local politicians agree that Garcia should face punishment for what they call nothing less than a “violent assault” against Wright.

“Francisco Garcia had a history of violence in his duties as a police officer, begging the question of why he was still a cop when he brutalized Donni Wright in May,” Assemblymember Harvey Epstein said. “While I am glad he is no longer an officer, it’s too little too late at this point. Former Police Officer Garcia must face real consequences for his actions, including criminal charges. Furthermore, he must never be allowed to hold a position of authority in any police department ever again.”

“I am glad that Francisco Garcia has resigned from the N.Y.P.D.,” said State Senator Brad Hoylman. “But a resignation is not the same as disciplinary action. We have no clue if the N.Y.P.D. would have disciplined him at all had he not resigned. We need to fundamentally change N.Y.P.D. disciplinary procedure to restore faith in this clearly broken system. Justice for Donni Wright isn’t just Garcia leaving his job, it’s making sure no New Yorkers have to suffer this violence from officers ever again. I applaud Councilmember Carlina Rivera, Assemblymember Harvey Epstein and District Leader John Blasco for their leadership in getting justice for the Wright family.”

“Donni Wright and his family still deserve justice,” Manhattan Borough President Gale Brewer said. “Officer Francisco Garcia may no longer answer to the N.Y.P.D. because he resigned and avoided his disciplinary hearing, but Garcia should still be held accountable to the fullest extent of the law.”

“While the Wright family can take solace in the fact that Francisco Garcia will no longer wear an N.Y.P.D. badge,” Councilmember Carlina Rivera said. “The N.Y.P.D. needs to be unequivocal in condemning his actions as a clear excessive use of force and abuse, and District Attorney Cy Vance must heed calls from the community to pursue criminal charges against Garcia. I’m happy that Donni and his family will not have to wait years for this small bit of closure, like the family of Eric Garner did, but that does not excuse the fact that the N.Y.P.D.’s disciplinary and removal process for officers continues to take far too long and fail victims. It must be overhauled from top to bottom immediately.”

The Daily News reported that former Officer Garcia — who joined the New York Police Department in 2012 — is a Tier 3 employee, meaning the N.Y.P.D. cannot prevent him from getting his pension when he resigns, even with disciplinary charges pending, according to a source.