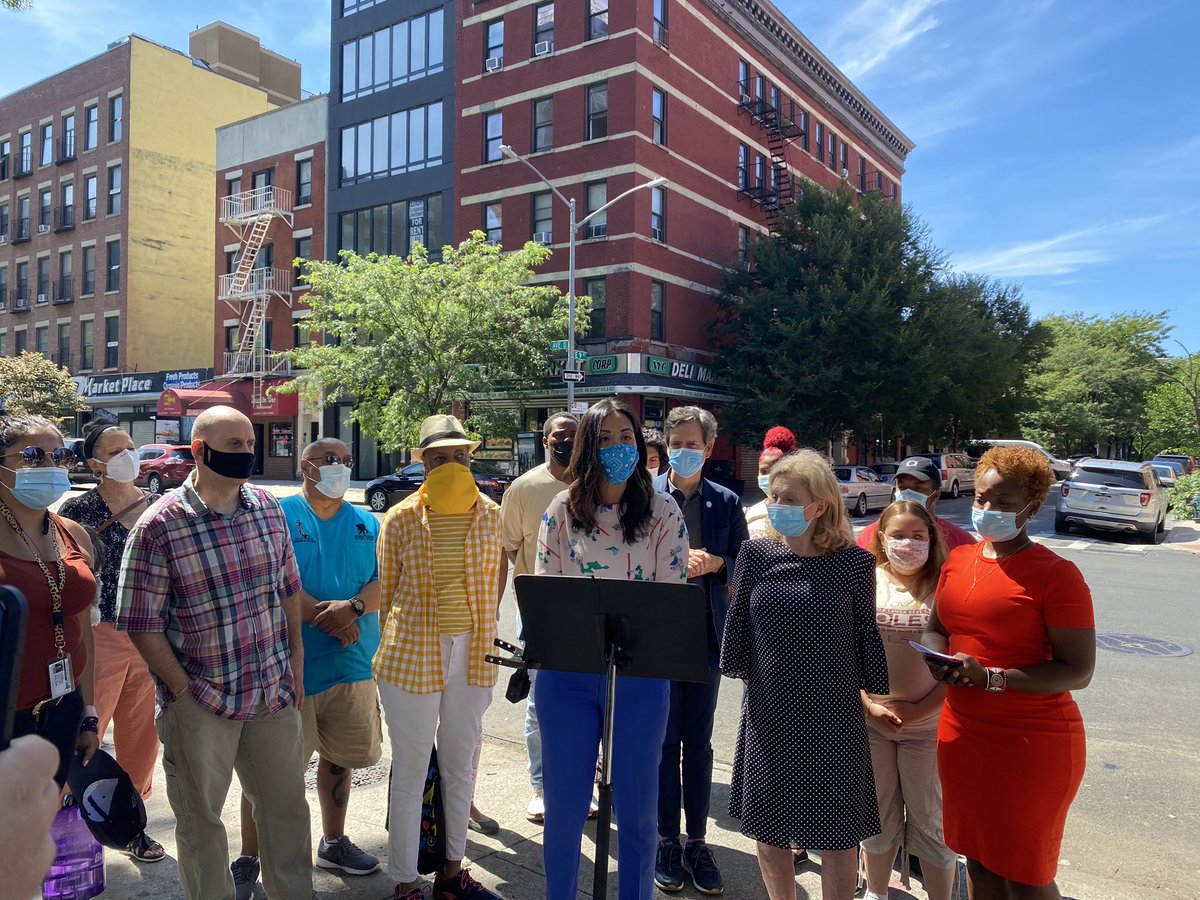 Councilmember Carlina Rivera, at podium, was joined by other local politicians and community advocates in calling for Officer Francisco Garcia to be kicked off the force and criminally charged. (Courtesy Carlina Rivera's Office)

BY THE VILLAGE SUN | Local politicians rallied at Avenue D and Ninth St. last Friday demanding that a cop be fired for a rough arrest there four months ago.

Joined by community advocates, Councilmember Carlina Rivera and the other four pols accused City Hall and law enforcement of delaying their investigations into what they called the “violent assault” on May 5 by Police Officer Francisco Garcia on local resident Donni Wright. They urged that criminal charges be filed against Garcia, who remains on paid desk duty.

“We shouldn’t have to stand here almost four months later demanding justice from a system that’s supposed to protect our community,” Rivera fumed. “When we ask for the firing and criminal charges for Officer Garcia, we are asking for the bare minimum from Mayor de Blasio, Police Commissioner Shea and District Attorney Vance. We’re asking them to make it clear that police abuse is unacceptable in any form. It’s a disgrace that six years after the death of Eric Garner and his denied justice, the de Blasio administration continues to deny justice for black and brown communities. This must end.”

The elected officials charged that Garcia’s actions “were nearly identical” to the incident that led to George Floyd’s death in Minneapolis three weeks later on May 25.

In a video of the Avenue D incident, Garcia can be seen making an arrest of some individuals at the location for failure to socially distance. A commotion breaks out as people protest the arrests. Garcia suddenly spins around and approaches Wright, who apparently may have caught his attention somehow.

“Move the f— back!” Garcia orders, while revving his Taser at Wright. “Why you flexing? Don’t flex…or you’ll get locked up, too,” he warns.

Instead of moving back, though, Wright can be seen stepping toward Garcia and, in the words of a police spokesperson, “taking a fighting stance against the officer.”

At that point, Garcia does a fast takedown of Wright, slapping and punching him, then dragging him onto the curb and sitting on his neck, at least initially, and then seemingly shifting onto his upper back. He stays in that position for less than a minute, about 46 seconds, before other police arrive on the scene and he gets off of Wright.

In the case of Floyd, Officer Derek Chauvin knelt down on his neck for nearly nine minutes, during which Floyd pleaded, “Don’t kill me,” “I’m about to die” and “Please, the knee in my neck, I can’t breathe.”

While Garcia has been investigated by the New York Police Department’s Internal Affairs Bureau, with a recommendation that departmental charges be filed, the N.Y.P.D. has provided no updates or clarity on why further department procedures are taking so long.

Meanwhile, Garcia has been the subject of at least seven misconduct lawsuits in the past five years, costing city taxpayers nearly $200,000, according to the Legal Aid Society.

“Four months later, we still have the same question: ‘Why is a cop with a history of violent behavior, who attacked a member of our community during the height of the COVID-19 crisis, not facing any consequences and still receiving pay?’” Assemblymember Harvey Epstein said. “I am proud to stand with my councilmember and members of our community to demand criminal charges be brought against Officer Garcia immediately. Every day of inaction sends the message to our community that a police officer can brutalize Lower East Siders without any consequences. We won’t stand for it.”

“This May, I was profoundly disturbed to see the footage of Officer Francisco Garcia and his colleagues brutally arresting Donni Wright and kneeling on his neck — a tactic the entire nation soon saw lead to the death of George Floyd,” state Senator Brad Hoylman said. “Now, after months of protest and legislative efforts responding to New Yorkers’ demands for police reform, I’m profoundly dismayed that Officer Garcia has neither been removed from the N.Y.P.D. nor have we heard any updates from the Manhattan D.A.’s office on its investigation. You’d think that the city would have learned a lesson after taking five years to fire [Officer] Daniel Pantaleo after the death of Eric Garner, but sadly, we’re not seeing that here yet.”

“It is absolutely unconscionable that after four months, D.A. Vance and Commissioner Shea have not given any updates on the status of the investigation into Officer Francisco Garcia’s blatant act of police brutality that was all caught on camera,” Congressmember Carolyn Maloney stated. “Criminal charges should be filed, and the N.Y.P.D. should fire Officer Garcia immediately. From Eric Garner to Breonna Taylor to George Floyd to Donni Wright — enough is enough. New York City leads the nation and sets the standard in our actions. We must set the standard that police brutality must end now.”

“Policing only works when police have the public’s trust,” Manhattan Borough President Gale Brewer added. “Officer Francisco Garcia violated that trust when he knelt on Donni Wright’s neck while attempting to arrest him for social-distancing violations. The N.Y.P.D. also violated that trust when they continued to have Garcia on the force even after multiple instances of prior misconduct. Officer Garcia must be held accountable: He must be fired from the Police Department and should face charges.”

Community advocate Shaheeda Yasmeen Smith said while Wright’s arrest was recorded, many other local incidents of excessive force were not.

“The unfortunate event that happened to Donni Wright, amplified how police misconduct and brutality is alive and well in LES,” she said. “There are so many incidents that were not recorded. But the community trauma that lives in the memories of many of the residents of this community and so many others like it has created a barrier between us and those who are paid to protect us.”

Ebonie Simpson, another community advocate, said the mayor is dropping the ball on a blatant instance of police brutality.

“The incident is a stark example of ‘The Tale of Two New Yorks,'” she declared. “What happened on Avenue D would have never happened just one block over, in front of the restaurants and bars on Avenue C. This excessive, dehumanizing and deeply racist violence is antithetical to the values we stand for in our community. We call for the immediate firing of Officer Garcia, for his attack on the community. The Lower Eastside Girls Club has marched time after time against police-sanctioned violence; we have asked the mayor to stand up for what is right, and commit to reallocating funding back into communities. The mayor has failed to rise to the occasion far too many times. The time was yesterday and the clock is up.”