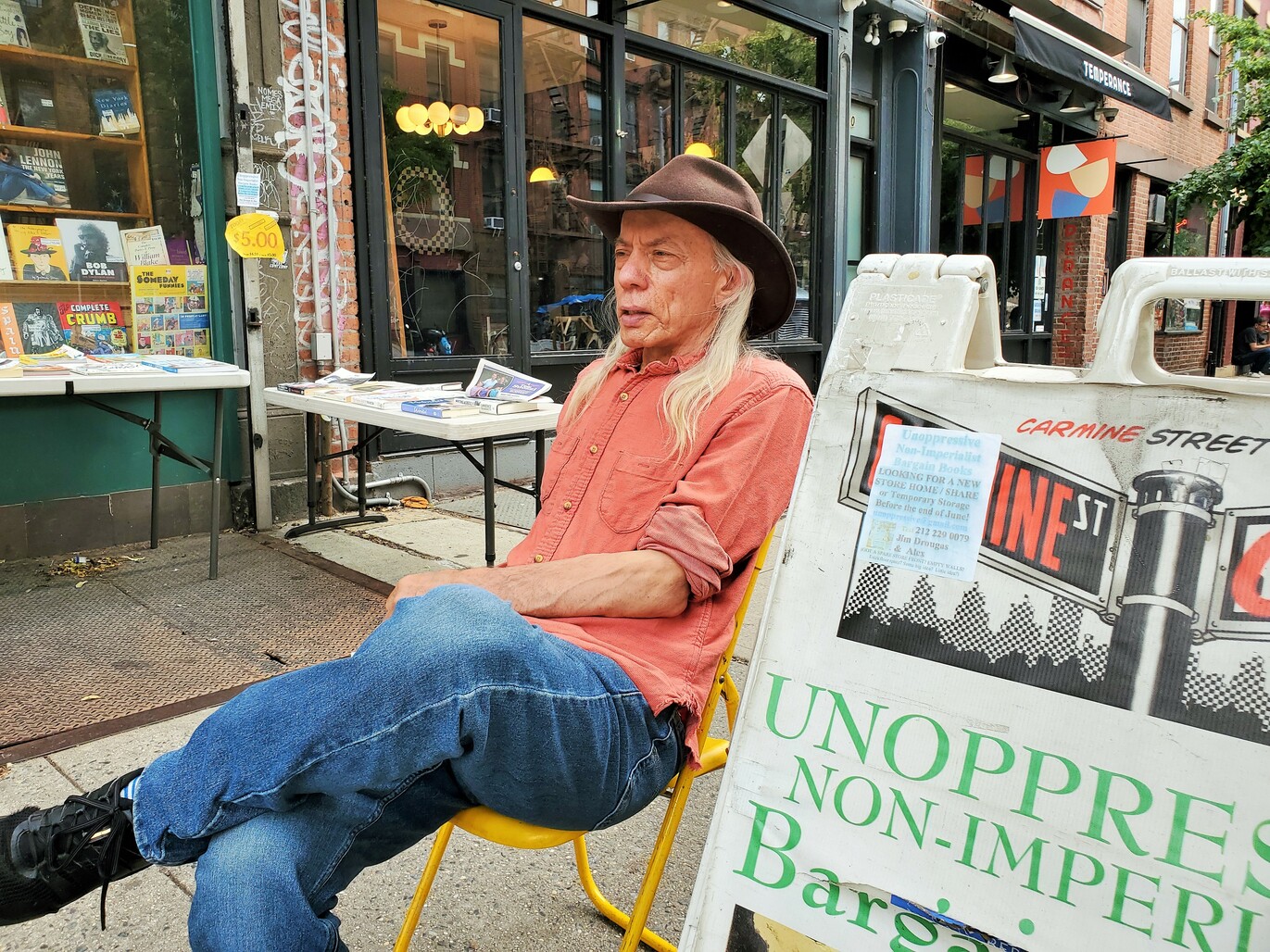 Jim Drougas outside his Carmine Street bookstore, which has retained its distinctly bohemian vibe amid a changed Greenwich Village. (Photo by The Village Sun)

BY LINCOLN ANDERSON | Jim Drougas was sitting inside Unoppressive Non-Imperialist Bargain Books on Thursday afternoon, doing what he often does: chatting with a friend.

In this case, it was local photojournalist Tequila Minsky. She had heard that Drougas would be closing the iconic Carmine Street bookstore by the end of this month.

“I wanted to get some shots of him while he’s still here,” she said, sadly.

When a reporter for The Village Sun showed up, Drougas promptly moved the chairs from inside the small, cramped shop out onto the sidewalk, so that the conversation would have some more space. In warm weather, he frequently hosts get-togethers with friends in front of the store, with wine and snacks, sometimes tarot card readings or even Drougas himself giving I Ching readings, if you’re lucky.

Arrayed on tables outside the store were bargain books for sale. One table featured Alexandria Ocasio-Cortez biographies, a novel by Isabel Allende and a children’s book by Supreme Court Associate Justice Sonia Sotomayor about her life story. On another were books by Beat poet Lawrence Ferlinghetti.

Drougas has run the quintessentially quirky literary spot for 31 years. It’s an increasingly rare remnant of the bohemian Village. The place features books on art, fiction, film, philosophy, spirituality, music and more, plus a large and comprehensive selection on Bob Dylan. The books are always half below retail price.

However, new owners bought the building a year ago and — after Drougas’s lease expired last September — they were unable to come to terms.

Drougas said the landlord raised his rent to $10,500 a month, plus wanted all of his unpaid back rent from during the pandemic, when the store was closed at times.

“They said, ‘Give us six months’ deposit and back rent,’” he recalled.

Drougas proposed letting the Nepalese store that used to be next door come in and share his space, to help him pay the rent. But the new owner nixed that idea, concerned the subtenant would not be able to pay. Previous subtenants of Drougas’s, including a fortune teller and a comic-book seller, bailed on him during the pandemic. A bitcoin ATM that Drougas hosted in his store is gone, as well. As for the Nepalese store, its owners could not pay the $10,000 rent the landlord was asking and eventually closed.

In January the parties hashed out a deal: The bookstore could stay through June — but would then have to vacate. Drougas said it simply was the best option available.

Since then, he’s been looking around Greenwich Village and the Downtown area but hasn’t been able to find a new space yet.

“Everything’s too expensive,” he told The Village Sun.

As a result, Drougas, 72, who lives nearby, will be putting the store’s contents into storage — for now. But he still hopes to reopen somewhere.

Sales are actually going well right now, he said, to the point that he’s actually thinking of adding some more books into his inventory before he clears out the space at the end of the month.

Although his new landlords might not recognize the value of Drougas and his store, a documentary about him, “34 Carmine Street,” directed by Beatriz Browne, has been earning accolades. The movie won best film about the Village at the Greenwich Village Film Festival and also best short documentary at the Big Apple Film Festival.

The hole-in-the-wall Village store has also doubled at times as an event space for things like standup comedy by the late “Professor” Irwin Corey, who was a friend of Drougas, or an artistic performance with oversized tarot cards by Amanda Millet-Sorsa with readings of William Blake’s poetry. A few years ago, not long before Paul Krassner died, Drougas hosted an in-store event with the 1960s counterculture author, who was patched in via video screen from California; Yippies Aron “Pie Man” Kay and Dana Beal, who were in the audience, shared anecdotes about the bygone scene.

On Thursday, the bookseller was sporting his trademark brown Stetson cowboy hat perched over his long hair. As he sat and talked, he was, as usual, relaxed. He seemed a bit subdued, though. Notably missing was his usual light laugh.

Maggie Paley, a writer who lives nearby on Bedford Street, dropped by to say hi. She wrote an article about Drougas and his store for The New York Times five years ago, “A Bookstore With High Concepts, Low Prices and Tight Quarters.”

Paley was asked how she felt about Drougas’s having to close the shop.

She shrugged, “I’m assuming it’s going to be saved at the last minute.”

“Should we organize a demonstration?” photographer Minsky chimed in.

“Demonstration? To what end?” Drougas said. “I already agreed to leave at the end of June.”

Alex, the store’s white cat, had strolled outside and was contentedly lolling around on the sidewalk. A series of young women stopped by to pet her and snap her picture.

A homeless man hunched over a red rolling walker hung with bulging plastic bags shuffled up to Drougas. He handed him a crumpled-up dollar bill, then trudged off down the street.

“He took a comic book yesterday,” the merchant explained.

It soon began to rain. Drougas collected the books from the tables and took them inside.

The homeless guy came back and shouted something. He wanted to protect his comic book. An obliging Drougas emerged with a clear plastic bag and opened it for him, and the man slipped his treasured comic inside.

As for this writer, he bought Will Eisner’s “A Contract With God” — considered the “first graphic novel” — and an “R. Crumb Sketchbook.” Drougas gave him a bargain price.