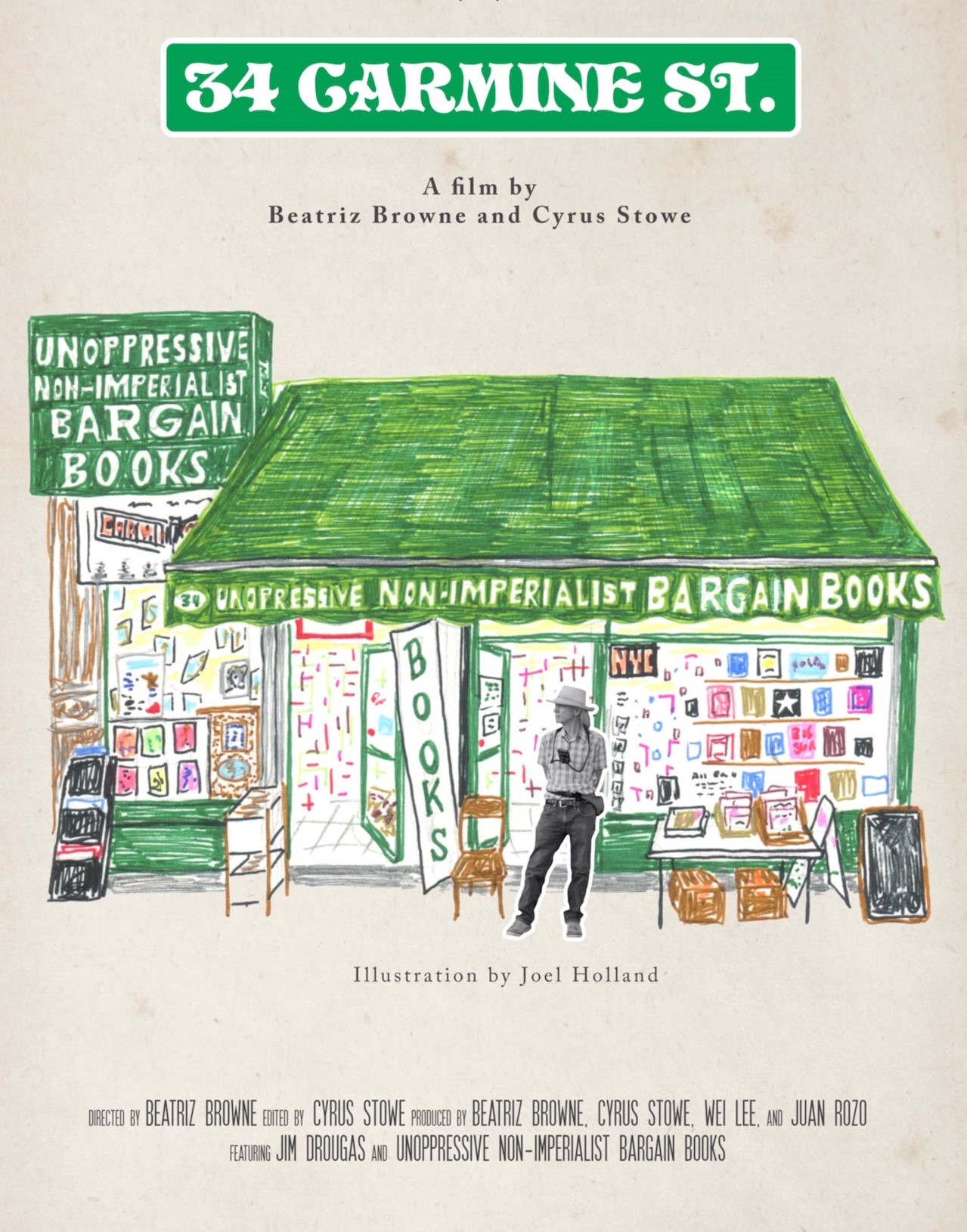 BY STEPHEN DiLAURO | Unoppressive Non-imperialist Bargain Books is a Greenwich Village landmark. No question. It’s a unique place and could exist, probably, only, right where it is.

“34 Carmine Street” is both the address and the title of a delightful new documentary directed by Beatriz Browne. Jim Drougas is the proprietor of the bookstore and protagonist of this charming cinematic paean to one of the last true bohemian outposts in America.

The film is also the story of rising rents, big greedy corporations and their impact on small business owners. Somehow, though, Drougas maintains a genuine optimism that has, so far, seen him through some crazy economic ups and downs in some crazy times.

Likewise, the filmmakers could not have chosen more iconic contemporary Downtown sidekicks for Drougas than artist and illustrator Harry Pincus and Larry “Ratso” Sloman, author, bon vivant and sometime fictional character in mystery novels by Kinky Friedman. They are exactly the types pf people who you might meet hanging out in front of Unoppressive Non-imperialist Bargain Books on a sunny afternoon.

The documentary opens and closes with the self-deprecating humorous anecdote Drougas tells about his aunt, which is somehow perfect. She said to him, “Jeff Bezos started selling books 20 years ago. You started selling books 40 years ago. He’s the richest man in the world. What happened to you?” Actually, maybe it’s not so self-deprecating, especially if one owns an establishment named Unoppressive Non-imperialist Bargain Books.

The neighborhood is embedded in Drougas’s psyche. He tells how he took his first LSD trip on MacDougal Street when he was 16 years old. He also talks about wanting to be a bookseller since he was 11 and imagines he might have been one in past lives.

This time around, before founding his current business in 1991, Drougas ran a bookstore in Soho for the publisher of High Times magazine, which was also a big-time marijuana smuggler back in the days before legalization. How can anyone live Downtown and not love this documentary, and its subject

Inside his current bookstore, all titles and décor are curated as a reflection of the owner’s taste. Dylan is side by side with Blake. Patti Smith looks down on them from her place on the ceiling. A sign boasts having more than 35 different books on Bob Dylan.

“There are even some Dylan tours [around the Village] that stop here,” Drougas tells the camera.

Being a bookstore where it is, poetry readings and other literary events have been part of the scene, featuring the late Allen Ginsburg, among others.

Like everything else in this documentary about a little bookstore that could, the archival footage and photos are presented with sass and class.

“34 Carmine Street” is clearly a labor of love for the filmmakers — love for both the subject and the neighborhood. The film was shot over three years, including some recent footage.

Apparently, the rent has become more and more of an issue. The building was sold in June of this 40th year anniversary of the bookstore being founded. So, of course, Unoppressive Non-imperialist Bargain Books received a notice to vacate.

Carmine Street has always been Bleecker Street’s little brother, so to speak. As any simpleton with a modicum of greed can tell you, the first three rules of real estate are “location, location, location.” Drougas points out that the presence of the bookstore and two other longtime small businesses on his block are at least part of the reason Carmine Street is now as expensive as it is.

“We created a monster,” he says.

At one point in the 24-minute short film, someone off-camera asks Drougas, “What’s a happy ending for you?”

He gulps, “Does there have to be an ending?”

You want authenticity? This is it.

Toward the film’s end, Harry Pincus muses, “As long as Jim’s bookstore is there, Greenwich Village lives!”

Unoppressive Non-imperialist Bargain Books is still there now, and the prices really are a bargain. Visit the store. See the movie.