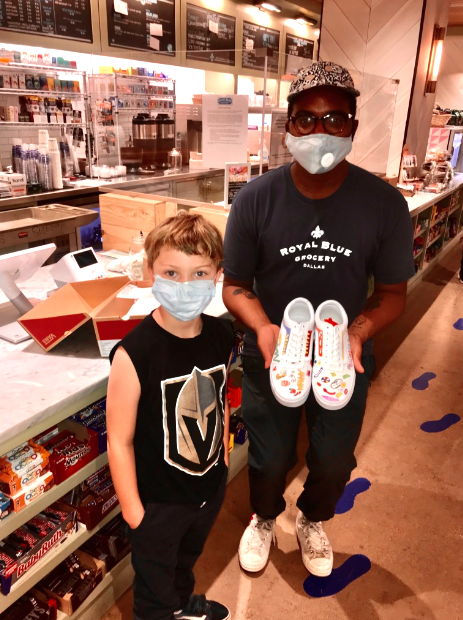 Brooks Leslie, left, with Wil, who is holding his pair of BROOKIX. (Courtesy David Leslie)

East Village kid is kickin’ it for BLM with custom sneakers

BY THE VILLAGE SUN | A young East Village artist is really kicking it up a notch for Black Lives Matter and his local church.

Inspired by the racial justice movement sweeping the country for most of the past year, Brooks Anton Leslie, 8, launched a line of hand-decorated sneakers, called BROOKIX. Acting locally, he is donating the proceeds to Middle Collegiate Church’s Black Lives Matter initiatives.

The idea came about when Brooks and his dad, East Village activist David Leslie, were down in Dallas in the aftermath of George Floyd’s death at the hands of Minneapolis police.

Brooks and his mom, Celest Villanueva, had flown to Texas, her home state, at the start of the pandemic. David later drove down to surprise Brooks on the boy’s birthday on March 27. Two months later, Floyd was killed, sparking nationwide protests.

In early June, inspired by murals that artists were creating on boarded-up storefront windows in Downtown Dallas, Brooks created a piece of his own, urging people to “BE KIND.”

Then, one day, on a whim, the young creator colored his dad’s white tennis sneakers. After that, things got kickstarted when a man named Wil, who works at the Blue Market grocery store on Main St., spotted David’s cool kicks. He asked the budding Basquiat if he could craft a pair for him.

Wil was wowed after getting his fancy footwear, and encouraged the pint-sized Picasso to keep going.

“It’s great to see someone as young as Brooks be involved in a cause so big,” Wil said. “Every time I wear my ‘BROOKS,’ I always get a ton of compliments. When I tell people that a young kid designed them, they are floored. But once I tell them the reason behind the design, they’re filled with joy, love and hope for the future.”

David, Brooks and Wil together came up with the idea of using the snazzy sneakers in a campaign to support BLM efforts.

“I asked Brooks where he prefers that we send the funds to Black Lives Matter,” David said. “He directed me to arrange it with Middle Collegiate Church, at Second Ave. and Seventh St., because he ‘likes it when that green line goes up.'”

And so, Brooks’s stylish sneakers have dropped with a righteous splash. And now, David said, step by step, BROOKIX are helping make a difference.

“In the midst of the turmoil, grief, protest and destruction that happened after the Floyd lynching, all of which our son was keenly aware of, he managed to create some beautiful offerings — the shoes and his BE KIND mural in downtown Dallas,” David said. “That beauty sparked some interests that begat the launch of support for Middle Collegiate Church’s BLM initiatives.

“And every time someone wears their BROOKIX out, that story invariably is retold when others see them and ask, ‘Where did you get those and how can I get a pair?’ and the support happens again and again and again. And that’s how Brooks has been able to sow those seeds that are flourishing and building support through his activist art offerings.”

For his part, the modest young artist said, simply, “I really like drawing all the different designs on the shoes. And I know just what color every line is going to be when I make it. I’m glad that people are liking them, so they are buying them, and then that puts more money in the church collection for Black Lives Matter.”

For Thanksgiving, Brooks is holding a Black Lives Matter Sale of $10 off on BROOKIX. Normally, the sneaks go for $100, but he’s marking them down to $90 through Sunday at midnight. Again, the entire $90 donation benefits Black Lives Matter initiatives at the East Village’s Middle Collegiate Church.

The effort has already raised $2,000 for the church. Brooks has gifted some Middle Collegiate members with BROOKIX and the $100 donations were made in their names.

“This is a thank you for their endless services and direct inspirations,” David said, “especially Matthew, who has had profound influence on our child and so many others.”

“He is a badass,” she said of Brooks. “He was a little tyke when he first got to church at 5. Now he sings in the choir. He’s come out of his shell. He likes looking up at the screen and seeing the line move — our budget go up.”

A video screen in Middle Collegiate’s sanctuary displays the church’s budget. The sneaker funds go into the house of worship’s general fund and then specifically toward BLM work, like Black Excellence and Black Wellness.

For example, in June 2021, the church will host an after-school Freedom Lab that will focus on racial justice.

“It will be a black-and-brown-led Freedom Lab, which will train all children how to build an antiracist America and an antiracist globe,” Lewis explained.

“He’s using his art to make a difference,” she said. “The money he’s raised is being used — a little blond, blue-eyed boy — for our Black Lives Matter work. Middle Collegiate Church has given grants out to five [BLM-related] organizations so far and BROOKIX has helped with that.”

For more information and to buy BROOKIX, contact David Leslie at davidleslieinc@gmail.com.