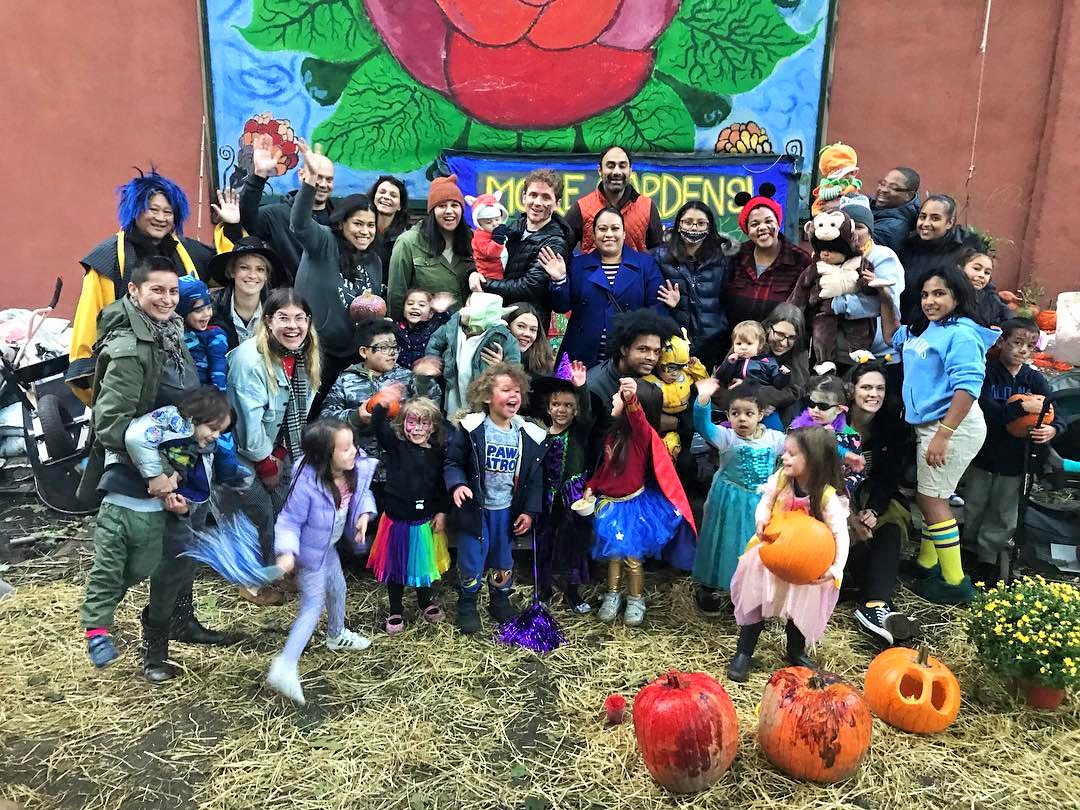 Kids enjoying Halloween at the Children's Magical Garden in 2018. (Facebook)

Developer is spinning, so far not winning, in Children’s Magical Garden fight

BY LINCOLN ANDERSON | Amid the long-running legal wrangling over a Lower East Side garden, a developer is firing back against greenthumbs’ accusations, inluding that he angrily threatened to dump out a port-a-potty onto the green space.

In November, the Children’s Magical Garden, as well as four of its individual gardeners, sued David Marom and his The Horizon Group for damages in response to his having filed a $20 million defamation suit against them in October 2019.

Marom’s defamation bid lost in court, but now the gardeners are demanding compensation for damages, plus court fees incurred in fighting the case.

In 2014, Marom paid $3.3 million to buy one of the three lots that comprise the 40-year-old garden at Norfolk and Stanton Streets — but the gardeners, claiming “adverse possession,” contend they still own it. Under the law of adverse possession, if someone takes control of a neglected space and improves it, he or she may acquire title to it after a period of time. The plaintiffs say the space was strewn with garbage and needles until gardeners cleaned it up decades ago and then maintained it.

The ongoing fight has delayed Marom’s plan to build a seven-story luxury residence on Lot 19 of the property.

Since 2013, the two other lots, Lots 16 and 18, have been under the control of the city’s Parks Department under the Greenthumb program.

On Monday, Marom e-mailed out a letter to media outlets “in response to inquiries and press statements” that he charges have been misleading about the property.

“In the past I have remained silent while CMG disseminated false information and photos to the media,” he said. “As a result, the press has unjustly depicted me as an evil, greedy and selfish developer. … They are far from the truth and these articles have been devastating for my family. So I am writing to you today to set the record straight.”

Marom says he has tried to work with the gardeners, to no avail.

“In 2015, I approached CMG with a very generous offer to redesign my entire building to include 1) classrooms inside my building so their children could safely learn indoors during the winter months and 2) a new, bountiful and sustainable garden,” he wrote. “We had several meetings with CMG’s architect to incorporate their feedback, in addition to what we originally offered. I desperately wanted this partnership to work and was willing to spend the time and money to make sure both parties were happy with the final product. The costs to redevelop their garden and build classrooms would have been 100 percent covered by me.”

Although Marom feels his offer was “fair and generous,” the gardeners declined it.

Accusing the gardeners of “destruction and lies,” he charges they have destroyed sections of the chain-link fence around the disputed lot and also “knocked over” plastic barriers that he added to “prevent further unauthorized intrusions.”

“CMG knocked over these [plastic] barriers, spread them throughout the garden and disseminated photographs to the media to make it look like we destroyed their garden,” he said.

“CMG repeatedly cut our fence and/or locks and in one instance they moved their port-a-potty onto our property,” Marom added. “I asked them to remove it. They then fabricated a story and told the media that I threatened to turn over the port-a-potty onto their property. I would never say or do that.”

“I have a grandchild, two children and several nieces and nephews,” Marom said. “I love children and would never, ever do anything to harm the children or adults who occupy the garden. The constant malicious allegations are false and distressing to me and my family.”

Marom said he would still love to partner with the community the way the Lower Eastside Girls Club has. The Girls Club boasts a new clubhouse on Avenue D with private apartments above it.

“They were able to build such an impressive facility and it continues to serve as an invaluable asset to our local community,” he said of the Girls Club. “Partnership was always our goal at 157 Norfolk and I would love nothing more than to emulate this success story to further enhance our local community.”

Marom said the gardeners are not communicating with him, but that his partnership proposal still stands.

Meanwhile, the plaintiffs tell a different story. In their lawsuit, they charge, “Marom has long sought to trample and destroy this important educational [garden] space for the diverse, multi-racial Lower East Side community.

“For the better part of a decade, Plaintiffs have suffered abuse and harassment,” their lawsuit states. “Marom has sent workers to the property to destroy trees and dump construction waste. Marom built encroachments on the Garden’s neighboring lots — even though he concedes he has no right to do so — and launched raids onto the Garden property to destroy plants and Garden supplies. Marom’s workers unloaded dozens of containers filled with rotting garbage onto this historic
community garden.”

They claim the fencing the developer erected was “unlawful,” encroaching on their two lots. In fact, on Monday the gardeners won a summary judgment regarding the fence, with State Supreme Court Justice Andrea Masley ruling it constitutes “trespassing.” Financial damages are still to be determined.

In general, the gardeners say, Marom’s construction plan would require “destroying and forever displacing the garden from the property.”

And they say the port-a-potty threat actually did happen.

“In one instance,” the lawsuit states, “David Marom personally came to the community garden where, in front of parents and children, he insulted Garden members and kicked and pushed over benches. Marom told stunned Garden members that he would ‘turn over [a] port-a-potty into Children’s Magical Garden,’ dumping waste and excrement where children play during afterschool programs.”

They charge that the developer’s “frivolous” $20 million defamation suit was filed simply to keep the gardeners from speaking out.

“Plaintiffs are of limited means,” the suit states, “and Marom knew he could never recover the multimillion-dollar judgment he sought from Plaintiffs.”

After Marom’s suit was defeated, the gardeners say they simply wanted an apology from him — but that he would not give one and “refused to engage with Plaintiffs.”

As a result, the suit states, “Plaintiffs had no choice but to file this lawsuit to obtain a formal judgment against him.”

In a statement to The Village Sun, Kate Temple-West, the garden’s president and director, said, “The court rulings against David Marom speak for themselves. He’s violated the civil rights of Children’s Magical Garden and our volunteers, and he’s a trespasser who has unlawfully interfered with our community garden. We will not be intimidated by David Marom and are committed to continuing to advocate for the Children’s Magical Garden and our Lower East Side community.”

She did not respond to the developer’s accusation of scattering around and messing up his plastic barriers.

“The trespass judgment [on Dec. 27] makes it clear that he is fencing off a portion of the garden in Lot 16 which is under [control of] the Parks Department,” Temple-West added. “He’s also fencing a portion of our garden in Lot 19, which we continue to vigorously defend in court in our adverse possession case.”