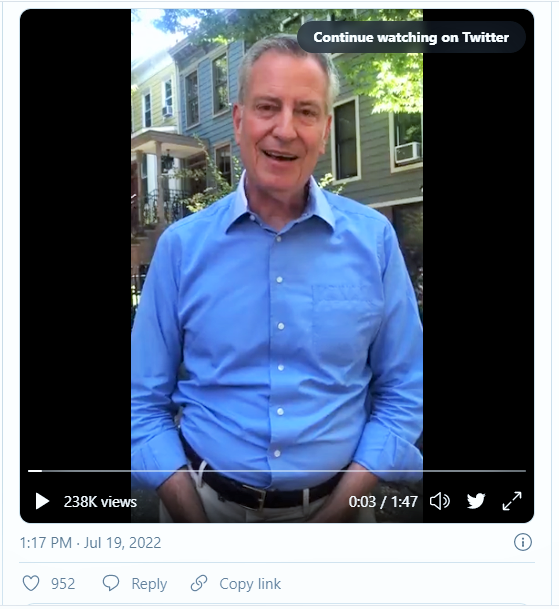 BY LINCOLN ANDERSON | With polls showing voters even less than blah about Bill de Blasio — actually strongly opposed to him winning election — the former mayor has dropped out of the running for District 10.

In a video tweeted early Tuesday afternoon, de Blasio announced he was bowing out of the Aug. 23 Democratic primary election for the congressional district.

It’s clear the people of #NY10 are looking for another option and I respect that. Time for me to leave electoral politics and focus on other ways to serve. I am really grateful for all the people I met, the stories I heard and the many good souls who helped out. Thank you all! pic.twitter.com/gpt6V6WLUf

In the video, filmed on a quiet, tree-lined street — perhaps in Park Slope, where he owns a building — de Blasio said it was clear that the district’s voters are “looking for another option.”

“Time for me to leave electoral politics and focus on other ways to serve,” stated text posted along with the video tweet.

Polling, including by de Blasio’s campaign, had shown the former two-term mayor little traction in the newly drawn district, which includes Manhattan south of 14th Street, as well as parts of Brooklyn, like Park Slope, that de Blasio had previously represented as a city councilmember.

Other candidates running in the crowded field, such as Assemblymember Yuh-Line Niou and Councilmember Carlina Rivera, have been polling higher in the left-leaning district. There are more than a dozen people running for the District 10 seat.

When de Blasio — with his obviously high name recognition — first announced that he was running for the seat, it was headline news.

However, de Blasio created strong ill will in the Manhattan part of the district by ramming through a number of large-scale contentious schemes, including the Soho/Noho rezoning, the East Side Coastal Resiliency plan and the Chinatown “megajail,” as well as the Haven Green senior housing project at the Elizabeth Street Garden, among others.

Last summer, when rowdy, late-night parties were rocking Washington Square Park to the chagrin of frustrated neighbors, de Blasio was said to have personally made the calls on a nightly basis on whether or not to have police enact the park’s midnight curfew.

His pushing through of the W. 14th Street busway also alienated many Village and Chelsea residents, who, depending where they lived, either feared the loss of their curbside access along 14th Street or a flood of car traffic redirected onto their sidestreets.

On another high-profile local issue, the mayor was dogged by seeming inertia and lack of follow-through. When he was running for reelection to a second term as mayor, de Blasio pledged at a Lower East Side town hall meeting that the city would try to reaquire the long-vacant old P.S. 64 building on E. Ninth Street, the former CHARAS/El Bohio. He subsequently blamed the owner, developer Gregg Singer, for being unresponsive and uncooperative, but Singer’s side said it was de Blasio who refused to engage in talks. Today the building continues to sit idle and has more recently been the site of the “Anarchy Row” homeless encampment, to boot.

In addition, beyond campaign polling, de Blasio was not exactly lighting the world on fire among the leading Democratic political clubs covering the district’s Manhattan part. In fact, he was shut out, not winning the endorsement of a single Downtown club.

The Downtown Independent Democrats endorsed Brooklyn Assemblymember Jo Anne Simon. The New Downtown Democrats have endorsed Niou. The United Democratic Organization and Coalition for a District Alternative are both backing Rivera. Dan Goldman has the support of the Village Independent Democrats. And in the latest club endorsement, this Monday the Grand Street Democrats gave their nod to Mondaire Jones.

Tellingly, at the V.I.D. endorsement meeting, de Blasio did not win a single vote. His name was barely mentioned — if at all — during club members’ pre-vote speeches on behalf of their favored candidates.