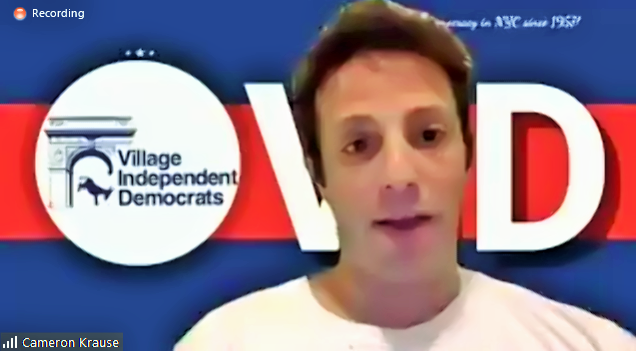 V.I.D. Co-president Cameron Krause led the virtual endorsement meeting, during which he calmly fended off an attack by a hacker who tried to disrupt the event. (Photo by The Village Sun)

BY LINCOLN ANDERSON | Vote Dan for the save!

Feeling that “saving democracy” is the most important thing right now, the Village Independent Democrats on Thursday night voted to endorse former Trump impeachment attorney Dan Goldman in the Democratic primary election for the 10th Congressional District. The election is slated for Tues., Aug. 23.

On the other hand, East Village Councilmember Carlina Rivera may have lost votes — or dropped from V.I.D.’ers first choice in ranked-choice voting — because, among other things, she does not support the creation of 100 percent affordable housing at 5 World Trade Center.

At the end of six rounds of ranked-choice voting at V.I.D., Goldman emerged on top with 26 votes, with Congressmember Mondaire Jones coming in second place with 16 votes, along with five votes for “no endorsement.”

After the ballots were first tallied, Rivera was in second place with 10 votes, but then fell out of contention as the ranked-choice process played out. Assemblymembers Yuh-Line Niou and Jo Anne Simon each had 5 votes after the first round, and Elizabeth Holtzman, the former 1970s congressmember and Brooklyn district attorney, had 3.

Before they voted, the club members held a vigorous virtual debate among themselves on Zoom on the pros and cons of the candidates in the crowded race, which features more than a dozen contenders.

The names that came up most during the discussion were Goldman, Rivera, Jones and Niou.

“As a first-generation child of Nazi survivors,” she said, “we need someone to fight against the rise of fascism.”

Pruchnicki said the order of his three votes would be Goldman, Rivera, Jones.

Cameron Krause, the club’s co-president, said he, too, would be voting Goldman, Rivera, Jones.

“It’s ponderous,” Krause said. “We’re at an existential crossroads of our democracy. I really think this is no joke. If we don’t do this correctly, we are in deep, deep danger of losing our democracy.”

Krause noted that Goldman has the “contacts” in Washington to give him a leg up in the House.

Similarly, District Leader Jen Hoppe said voting for someone experienced in Washington politics who could hit the ground running is critical right now.

However, Mar Fitzgerald, the other V.I.D. co-president, argued forcefully for Rivera while also knocking Jones.

“I am wholeheartedly going to rank Carlina No. 1,” she declared. “She is a member of the V.I.D. family. … She gets things done.”

Fitzgerald said Rivera had been a very active lawmaker, having “her hand in over 1,000 pieces of legislation the last five years,” ranging from issues like making abortion pills accessible to affordable housing.

“Carlina grew up, [raised by a] single mother in NYCHA,” she said, referring to public housing. “We want to talk about someone who’s grounded, someone who pulled herself up by her bootstraps — that’s Carlina.”

Meanwhile, Fitzgerald said, in talking with Jones, who currently represents Westchester and Rockland Counties, she found “he could barely answer a single question about our district.”

In addition, she knocked the idea of Goldman as a dragon (or dog) slayer, noting that the job against Trump — who was twice acquitted of impeachment in the Senate — was not finished.

“Trump is alive and kicking,” she stressed. “He can still disrupt the election. Until you put that dog down, you haven’t done anything — don’t even talk about it.”

Derided by some as a “carpetbagger,” Jones recently moved to Carroll Gardens in the Brooklyn part of District 10. In Jones’s defense, Krause, who grew up in Jones’s suburban district, said the congressmember, after the recent redistricting, had basically been bullied into not running for reelection by fellow Congressmember Sean Patrick Maloney and House Speaker Nancy Pelosi.

“Yes, he could have run against Sean Patrick Maloney,” Krause said, “but you’re just asking him to run a race that’s he’s going to lose.”

He noted that Maloney, who became chairperson of the Democratic Congressional Campaign Committee last year, “is very powerful.”

State Committeeman Ben Yee spoke in favor of Brooklyn Assemblymember Simon, who was recently endorsed by the Downtown Independent Democrats. Meanwhile, like others, Yee slammed Rivera for not supporting 100 percent affordable housing at 5 W.T.C., noting that when local elected officials don’t back affordable housing, “it gives ammunition to Open New York.”

He noted that Niou has not won political club support.

Yee scoffed at the idea of supporting Jones because “he didn’t feel like toughing it out” in his own District 17 but checks boxes as a Black and gay man as “absolutely nonsense.”

“I think Jo Anne [Simon] is the most viable — a solid progressive,” he said.

Yee said he would be voting Simon, Goldman, Rivera.

However, David Siffert, a former V.I.D. president, touted Rivera as “the most viable” candidate.

“I think we should focus on local politics — politics are local,” he said, adding of Rivera, “I think she gets things done.”

Of Niou, Siffert said, “I’m a little upset she cleared the state Senate field against [Brian] Kavanagh and then dropped out [to run for Congress].”

In her remarks, Lois Rakoff said Rivera “would be good for kids and she’s a Latina.”

Melissa Carty, a V.I.D. corresponding secretary, reported that she had reached out to Rivera, asking why she was the only candidate in the District 10 field not to support 100 percent affordable housing at 5 W.T.C. Carty said she received a response back from Jamie Rogers, Rivera’s husband.

“His comment is that $500 million could be spent in better ways — like investing in NYCHA,” Carty said.

“I still chafe at the Tech Hub,” he seethed of the upzoned E. 14th Street project that Rivera approved without zoning protections for the surrounding area. “I still chafe at East Side Coastal Resiliency. I still chafe at Open Restaurants. She’s never met a real estate deal she didn’t like. She’s decided that upzoning is appropriate.”

Johnson said he would be voting Niou, Simon and Pete Gleason. A Tribeca attorney and former firefighter, Gleason is running on an anti-de Blasio platform.

Rick Braun said he was voting for Goldman for his No. 1 choice. He added that he had concerns about Rivera over issues like the Tech Hub and E.S.C.R., noting, “A lot of community members over there are upset.”

V.I.D. Co-president Krause, for his part, said the opposition to the East River Park-razing E.S.C.R. resiliency project, which Rivera supports, is not uniform throughout the East Village and Lower East Side.

“I run on that bike path every single day and I did not see any NYCHA residents at the protests,” he noted.

Lily Zhou said, while she liked Rivera as a candidate, she felt Niou “isn’t ready” to make the jump to the federal level.

Some club members advocated earnestly for Jones, who is in his second year in Congress after winning an eight-person primary to fill the then-open seat formerly held by Nita Lowey.

Tony Hoffmann, another former V.I.D. president, noted that Jones is “the first openly gay, Black member of Congress.” He added that Jones, who grew up in Section 8 low- and moderate-income housing, went on to attend Stanford and Harvard.

Similarly, Kate Linker said of Jones, “It would be an acute loss to lose him. This is one of the most acute legislators in Congress at this time. We should not underestimate the importance of having a Black, gay man represent the district, a person who is fully intersectional and who will argue for people who are marginalized in the Trump era.”

At the meeting’s end, after the votes were tallied and Goldman was announced the winnner, Krause told the club, “Get ready. This is going to be a tight race. I think the sentiment is there are a lot of good candidates in this race. … Let’s win some races and save our democracy.”

V.I.D. recently teamed up with other Downtown Democratic clubs to do virtual interviews of most of the candidates in the District 10 race, which are still viewable on the V.I.D. YouTube channel.

In other endorsements, V.I.D. was underwhelmed by the winners of two judicial races in the June 28 Democratic primary elections, Carmen Pacheco for Civil Court and Hilary Gingold for Surrogate Court. It was noted that Pacheco had made a “worst landlords” list. The club voted “no endorsement” in the November general election for both races.