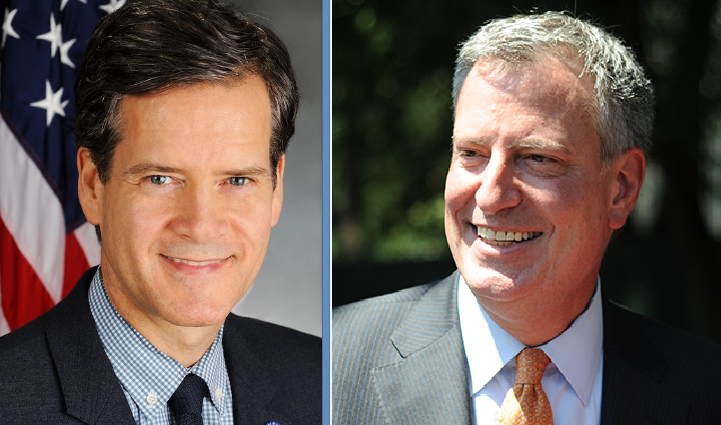 Former Mayor de Blasio's campaign announcement is grabbing headlines but state Senator Brad Hoylman is also running for the new 10th District seat on the strength of his record as a progressive lawmaker.

BY LINCOLN ANDERSON | Hank Sheinkopf immediately knew why The Village Sun was calling on Friday.

“He can win — and he can win significantly,” he said, unprompted, right off the bat, as he answered the phone.

He was referring to Bill de Blasio, who this morning on MSNBC’s “Morning Joe” declared that he has thrown his hat into the ring for the new 10th Congressional District, which includes all of Manhattan south of 14th Street.

The new two-borough district also includes the progressive Brownstone Brooklyn neighborhoods of Brooklyn Heights and Park Slope, plus Borough Park, much of which de Blasio represented in the City Council when he started out his career in elected office.

The new district lines were set to be finalized today, with the Democratic primary now pushed off two months from June 28 to Aug. 23.

Sheinkopf, a veteran Democratic political consultant, said the former mayor has several factors in his favor.

“He knows how to run for office,” he said. “He knows how to run a campaign. The district fits him. He’s got Lower Manhattan, which fits him very well. He can go to gun control and a woman’s right to choose. The Borough Park gang — he gave them everything they wanted.

“I always said, in politics do not underestimate Bill de Blasio for a minute.”

Assuming de Blasio is elected to Congress, Sheinkopf said, “He doesn’t have to run anything — all he has to do is run his mouth. It’s a perfect setup for him.”

Similarly, on the campaign trail, the consultant said, “He can talk about larger issues, liberal, global arguments that he can carry well — platitudes, which tend to work well in this kind of race. Which is perfect for him — he’s a very good speaker, very thoughtful.”

Governing, on the other hand, isn’t the main job in Congress, as Sheinkopf explained it, noting that could be good for de Blasio, since many felt it wasn’t his strength. The former mayor’s management of New York City was frequently savaged by the media and many New Yorkers. His ramming through, for example, of contentious initatiatives in the Downtown area like the East Side Coastal Resiliency project and the Soho/Noho rezoning has left open wounds — literally — including transforming much of the 50-acre East River Park into a treeless mud pit.

“The basic job is pontificating, raising money and constituent services,” Sheinkopf said of being a congressmember. “All you have to do is talk about things — you must have a tongue that wags.”

But de Blasio certainly won’t be running unopposed. State Senator Brad Hoylman, who lives in Greenwich Village, for one, has also declared he is seeking the 10th Congressional District seat. He says he wants to take his skills to the federal level to have a greater impact.

“I’m preparing to run for the new NY-10 should the lines hold,” Hoylman told The Village Sun on Friday. “This is a crisis moment in our country for reproductive health, voting rights, L.G.B.T.Q. kids and their families, climate action and gun safety. I’ve addressed many of these issues over the last decade in the New York State Senate by sponsoring, co-sponsoring and passing some of the most progressive legislation seen in Albany, including the Reproductive Health Act, GENDA, banning ghost guns, the Child Victims Act and the nation’s most extensive state law to combat climate change. But the truth is we can’t win the fight for our personal liberties, the environment and gun control without federal action. That’s why I’m running for Congress.”

Sheinkopf, though, noted that Hoylman would have to give up his state Senate seat if he runs for Congress.

“He might do well in the Brownstone Brooklyn neighborhoods,” he offered, though adding of Borough Park that “they don’t know him.”

Assemblymember Yuh-Line Niou, who has been campaigning for state Senate up until now, is also said to be eyeing the 10th District seat and is slated to make an announcement on Saturday in Chinatown.

“She would be an interesting candidate to watch,” the veteran politico said.

He added he thought Niou would have a hard time unseating Brian Kavanagh in the state Senate, noting, “You have to always give the advantage to the incumbent.”

In addition, Stuyvesant Town and Peter Cooper Village, with 3,000 residents between them, is a key voting bloc in the state Senate district, Sheinkopf noted, opining, “Who can dominate them? Kavanagh. That’s a lot of votes.”

Other names being mentioned as possible candidates for the 10th District include Councilmember Carlina Rivera and former Council Speaker Corey Johnson, according to The City.

“You gotta make him the favorite today,” Sheinkopf said of de Blasio’s chances in the 10th District, though quickly adding, “But that could change,” depending on whether other candidates enter the race.

“Probably the only one who can beat him is Brad Hoylman,” he said. “There is also a chance that Assemblmember Bobby Carroll will run. He is very popular in Park Slope. His transportation agenda shows that his head is in the right place.”

As for the new 12th Congressional District, covering Manhattan north of 14th Street, where longtime Congressmembers Jerrold Nadler and Carolyn Maloney are now going to be going head to head, Sheinkopf gives Maloney the edge.

Maloney’s current East Side district includes more of the new 12th than Nadler’s West Side one does, plus Maloney is a woman, which gives her an edge, he said.

“She’s got more of the district,” Sheinkopf said. “Nadler’s predicting the West Side will turn out [to vote in large numbers]. But the West Side he’s talking about came out of the antiwar movement. It’s a West Side where he hasn’t been challenged for years. A lot of those voters have moved to Florida. To get back that district, you’d have to blow up all the [new] buildings that have been built.

“And she’s not one to ever underestimate,” Sheinkopf said of Maloney. “And she’s a woman in this environment — and a woman matters.”

Asked if he thought Nadler might have a better chance running in the 10th District, Sheinkopf said yes since there would be, as he put it, “less East Side/West Side dissension.”