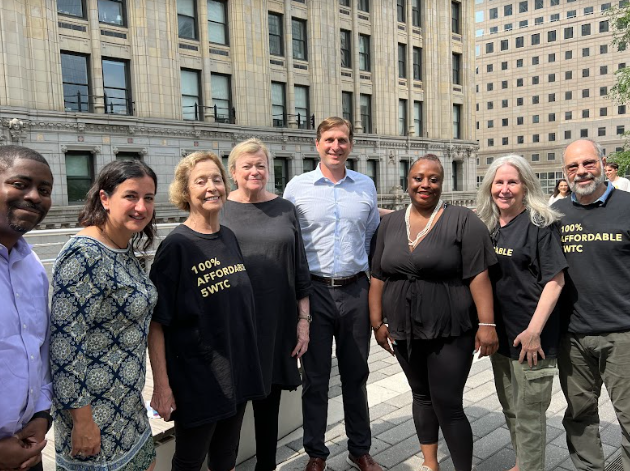 BY THE VILLAGE SUN | Dan Goldman, a candidate for Congress in District 10 and lead counsel for Donald Trump’s first impeachment, on Thursday joined the Coalition for 100% Affordable 5 World Trade Center in announcing the release of a study outlining the feasibility of developing 5 World Trade Center as entirely affordable housing.

The independent analysis provides examples of how economically feasible, fully affordable housing could be developed at the site, with a preference for 9/11 survivors, first responders and their families.

“I lived in Lower Manhattan on 9/11 and the redevelopment of the World Trade Center site is personal to me,” Goldman said. “Ensuring that 5 World Trade Center is 100 percent affordable is a moral imperative, and an opportunity to show a better path forward for development in New York — one that reimagines the relationship between public money and private development to lift up all New Yorkers.

“The partnership between the World Trade Center developers and our government must include the developers giving back to the community that has given so much to them. I want to thank the coalition for the hard work they have put in to get us to this point and I look forward to taking the mantle from Congressman Jerry Nadler as a partner in this fight.”

The study looks at two options for full affordability, one at 80 stories and one at 60 stories, that, according to the findings, would not exhaust existing state affordable housing subsidies or divert funding from New York City’s public housing.

(As previously reported by The Village Sun, Councilmember Carlina Rivera, another candidate for District 10, reportedly opposes a 100 percent affordable 5 W.T.C., feeling, “that $500 million could be spent in better ways — like investing in NYCHA [public housing].” A Rivera campaign spokesperson did not respond to a request to clarify the councilmember’s position on 5 W.T.C.)

Both options presented in the new feasibility study provide for a mix of income levels and include 20,000 square feet of community space. Either option would make 5 W.T.C. the tallest affordable housing building in the United States.

“Creating 100 percent affordability at 5 World Trade Center would provide much-needed desegregation to the areas surrounding the site,” coalition member Mariama James said. “As of the 2020 census, the area encompassing Community Board 1 was only 4 percent Black and a mere 1 percent Indigenous. Further, it would benefit the 9/11 survivors and first responders, many of whom are facing health impacts from 9/11. We cannot afford to miss this opportunity to honor those directly affected by 9/11 and to recognize the Civil Rights Act of 1964, which prohibits segregation on public land.”

The study was authored by Jerrod Delaine, a professor at Pratt Institute and New York University. In addition, Delaine is the C.E.O. of Legacy, a real estate development company focused on workforce and affordable housing. He is experienced in planning, design, construction, finance, affordable housing and asset management. A credentialed architect, he spent the first portion of his career in architecture, mostly focusing on managing affordable housing projects in the Southeast.

“This study was the culmination of many hours of research and exploration to understand the feasibility of developing 100 percent affordable housing at 5 World Trade Center,” Delaine said. “Because the site was acquired by the government using federal HUD funds, it affords a once-in-a-lifetime opportunity to create world-class affordable housing in a community that has not produced much housing for New Yorkers with economic and cultural diversity.”

The options presented in the feasibility study offer an alternative to the current proposal for the site, which calls for building a luxury glass skyscraper of roughly 900 feet and 1,200 residential units, of which only 25 percent would be affordable.

Among the study’s key findings is that a mix of units allocated equally among Section 8-eligible residents, residents earning 60 percent of area median income (A.M.I.) and residents earning 100 percent of A.M.I. “would provide great affordability while providing the developer with an income stream to offset reduced rental income.”

Also, the study says, the proposed equity required for the alternative options would achieve an internal rate of return (I.R.R.) of 20 percent, “making the project attractive to developers and investors.”

The proposed development would not utilize Low-Income Housing Tax Credits (LIHTC) financing, but would use real estate tax abatement programs and dedicated subsidies, according to the study.

Furthermore, the study notes, as in virtually all affordable housing developments, “the cost of this publicly owned land is assumed at reduced amount.”

According to Delaine’s findings, the 60-story option would provide 810 units of affordable housing at an estimated overall construction cost of $910 million.

The 80-story option would provide 1,620 units of affordable housing at an estimated overall cost of $1,438 million.

Goldman and his wife, Corinne, live in Lower Manhattan where they are raising their five children. In 2019, Goldman served as lead counsel for the impeachment investigation of President Trump for abusing his office for his personal interest regarding Ukraine.

The Democratic primary in New York’s 10th Congressional District is on Tues., Aug. 23.