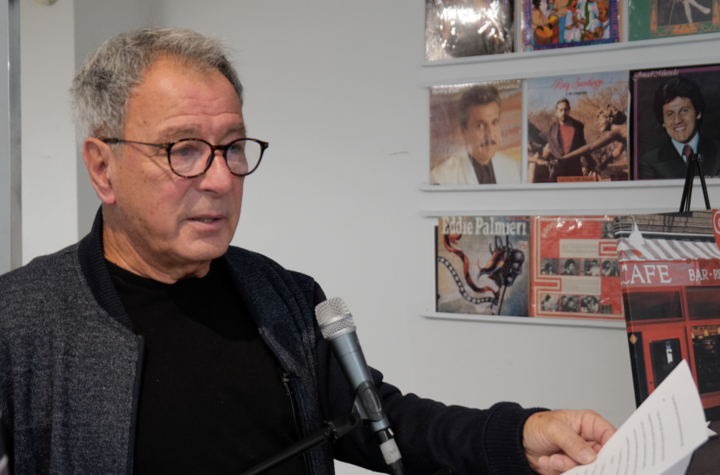 At La Sala de Pepe, Robin Hirsch read selections from his writings about working in frenetic Swedish restaurant kitchens as a young actor and also the early days of the Cornelia Street Cafe. (Photo by Michael Jacobson)

Cornelia appropriation? The curious case of ‘Cornelia Street’ and the cafe

BY LINCOLN ANDERSON | The term “cultural appropriation” is thrown around a fair bit these days. In fact, a new occasion to declare it — involving someone’s life story, or maybe just some parts of it — might well be hitting Off-Broadway this very month. Possibly. Maybe. It’s still a bit murky — though not because of anything on the part of the aforesaid someone. …

A new musical titled “Cornelia Street” is opening at the Atlantic Theater, in Chelsea, at 336 W. 20th St., on Jan. 20. The book is by Simon Stephens, with music and lyrics by Mark Eitzel. Neil Pepe is the director.

Stephens is a prolific, London-based playwright with more than 20 works to his name, including “Harper Regan,” “Motortown” and “The Curious Incident of the Dog in the Night-Time.” He’s known for “gritty tragedies.”

Enter from stage left or right (either will do) Robin Hirsch, not so much known for gritty tragedies as for having been the impresario of the Cornelia Street Cafe, as well as the current lantern bearer for “Cornelia in Exile.” According to Hirsch, 80, during the Greenwich Village cafe’s swan song four years ago — before closing due to a rent hike he and his partners could not afford — Stephens spent some time at the place schmoozing with him, soaking in the ambience.

“He hung out with me several times toward the end as I was figuring out what to do,” Hirsch said. “I never heard from him until four years later until I heard there was a musical about me. … We seem to have had a nice time together. It seems to have inspired something. … Whoopee.”

Exactly how much the musical actually mirrors Hirsch’s life and that of the actual Cornelia Street Cafe is unclear.

“All I know is the summary on the Atlantic’s Web site,” Hirsch said.

In fact, the summary is basically a blurb: “In a back street in the West Village, Jacob Towney tries to save the restaurant that has been his home for longer than he can remember and release his daughter to the life he dreams she can have. His place is a home for the odd ghosts of the [V]illage. It is out of place and out of time and running out of luck.”

The setting, plus the reference to “his home for longer than he can remember,” pricked a chord with Hirsch.

“‘Cornelia Street, West Village’… . Is 41-plus years enough?” he asked, in exasperation. Hirsch founded the cafe with two partners back in 1977.

The potential significance of the main character’s name, Jacob, isn’t lost on Hirsch, either. He grew up in England in a German-Jewish family that had fled the Nazis.

“It is a Jewish name,” he said of Jacob. “It’s also the name of my father-in-law.” In fact, he added, “I think it’s more appropriate than [Stephens] knows.”

Hirsch, who is also a fine writer, shared a passage from one of his autobiographies, “The Whole World Passes Through: Stories from the Cornelia Street Café” (Franklin Street Press, 2017), originally published as “Manna of the Day: Being a Brief History of Cafés, Coffeehouses and One Café in Particular” (Culturefront, 1995).

“See how long I’ve been at it!” he quipped of the original publication date.

The passage refers to a man named Jacob, an immigrant from Lebanon, who is credited with opening the first coffeehouse in England: “Houses for the consumption of coffee opened in Vienna in the first half of the seventeenth century. In 1650 in England an enterprising Jew known to history only as Jacob (Cromwell had just let the Jews back into England) opened the first English coffeehouse, in Oxford. Two years later, another enterprising immigrant, Pasqua Rosée, opened the first coffeehouse in London, harking back to its medicinal properties, and claiming in a handbill that coffee ‘quickens the spirits, and makes the heart lightsome…is good against sore eyes…excellent to prevent and cure the dropsy, gout, and scurvy,’ and that, by way of reassurance, it was ‘neither laxative nor restringent.’”

Director Pepe is known for having taken David Mamet’s “American Buffalo” from the Atlantic to Broadway. Hirsch and friends suspect the game plan for “Cornelia Street” is the same.

“So, it’s a musical and the goal, I’m sure, is Broadway,” Hirsch said.

Apparently playing the role of Hirsch…er., Jacob…will be Norbert Leo Butz, a two-time Tony Award winner for Best Actor in a Musical.

Upon hearing about “Cornelia Street” over the summer, Hirsch’s first instinct was to reach out to Pepe about it. Pepe never responded. But Stephens promptly did — the very next day. Hirsch showed his “lawyer friends” the e-mail. It was clear that Stephens, in turn, showed Hirsch’s e-mail to his lawyer; his reply was worded very carefully.

“The way he responded,” Hirsch said. “Oh, my God, he consulted a lawyer.”

Hirsch has been unable to find out more about the musical.

“My correspondence with them eventually boiled down to, ‘I’ll show you mine if you show me yours,’” he said. “Nothing doing.”

Of the terse reply, Hirsch said, “I feel it’s a little rude.”

Apparently, that the musical is not called “Cornelia Street Cafe” but just “Cornelia Street” is an argument in the playwright’s defense. (In that sense, it sounds a bit like the current Greenwich Village community newspaper controversy that’s pitting the upstart New WestView News versus the original WestView News.)

According to Hirsch, Stephens’s statement basically was: “This cafe is not your cafe.”

Asked if he feels there are any grounds for litigation, Hirsch responded, “I’m not a litigious person — I didn’t grow up in this culture. But some kind of collaboration would have been nice — just saying hello would have been nice. It could have been a very friendly back and forth, if they had been upfront about it.”

Somewhat surprisingly, it is apparently legal for someone to do a musical based in full or part on a person’s life story without his or her permission. However, if the subject has already written a life story or made a film about it, then it can be copyright protected.

In addition to “The Whole World Passes Through,” Hirsch has published an autobiography about his family and the early part of his life, “Last Dance at the Hotel Kempinski: Creating a Life in the Shadow of History” (UPNE, 1995), a Holocaust memoir that he said has actually been praised for its humor. Another autobiography about his Cornelia Street Cafe days, “Cafe Stories,” has been an ongoing work in progress, with public readings.

One of these was on Dec. 19 in the East Village at La Sala de Pepe, at 73 Avenue C. Years ago, Hirsch used to live right near the spot.

The small audience was full of his friends and Cornelia Street Cafe fans. Hirsch, who is poised, witty and sharp at 80, read a few chapters. One recounted his time after graduating from Oxford, traveling Europe as an aspiring actor while working low-wage jobs. Describing working as a dish dryer in a fancy Stockholm restaurant, he noted how, in many ways, it was akin to a performance.

“The rhythm of the night is similar,” he read. “The passion, the charade, the full-blooded theater.”

Another story he read recounted how he started Cornelia Street Cafe on “a lunatic whim” with two other starving creatives, actor Charles McKenna and visual artist Rafaela Pivetta. The storefront had been an antique shop for 40 years, after which local supers made it their drinking den. Stray dogs pooped inside of the place, but the supers were too blitzed to bother cleaning it up. The tough-guy landlord tried to dissuade them from taking the space, but they prevailed.

At first the cafe was just “one room and a toaster oven,” as Hirsch recalled. He personally “excavated” the place’s basement to create the performance space. A few years after opening, they made an album of frequent performers there on the Stash jazz record label, “Cornelia Street: The Songwriters Exchange.”

Hirsch’s “Cafe Stories” readings are, thus, the real story, the real Cornelia Street. He’ll be continuing them even as “Cornelia Street,” the musical, is playing in the neo-Gothic former church that is the Atlantic.

In a sense, by doing the readings, Hirsch is saying, in dignified defiance, “This — this is the real thing.”

“That’s what I’m doing,” he said, “in a very nonaggressive way.”

The main thing for him is to keep the real cafe’s spirit going. By the way, four years later, the Cornelia Street storefront remains empty.

In addition, filmmaker Michael Jacobson is currently making a documentary about the Cornelia Street Cafe and Hirsch. Jacobson also reached out to Stephens to ask him about the new musical, without success.

Hirsch said he would ask Stephens if he could share his e-mail with this reporter, but as of press time none had been provided.

While he’s not interested in litigation, Hirsch said he’s being careful not to become the target of it, either. So despite being stunned — and a spectrum of other emotions — by “Cornelia Street,” he’s cautious how he expresses that and to whom.

“I need to tread a little bit carefully,” he noted. “On the other hand, he didn’t tread carefully.”

He shrugged, “Richard II couldn’t get out of his grave and sue Shakespeare.”

Hannah Reimann, a pianist and singer who is friends with Hirsch and plays at his “Cornelia in Exile” shows, said his erstwhile brick-and-mortar cafe is obviously great material for a work for the stage.

“I’m not surprised that somebody would want to make a musical, in part, about one of the most charming, unique, creative and well-known centers for culture in Downtown New York City for over 40 years,” she said. “And many of us are super-curious to know what the [musical’s] story will be. Robin Hirsch accomplished a lot for so many artists at Cornelia Street and the name of the cafe is known all over the world.”

Hirsch, of course, is “super-curious,” too.

“I’m very curious to see the musical,” he said. “I would have thought they would have invited me. But clearly they haven’t.”
In fact, he’ll be out of town when the curtain rises for the show’s world premiere, but others might be going in his stead.

“I have an awful lot of people who want to go to the opening and make a scene,” he said.

Hirsch has also, coincidentally, in recent years been taking singing lessons, with Reimann’s encouragement. So, there’s still an opportunity for the Cornelia Street Cafe founder to be allowed to play a part, literally, in…“Cornelia Street.”

Correction: When the Cornelia Street Cafe opened in 1977 it was “one room and a toaster oven” — not a microwave, as incorrectly stated in the original version of this article. The Village Sun apologizes for the mistake, which Robin Hirsch termed an “egregious error.”