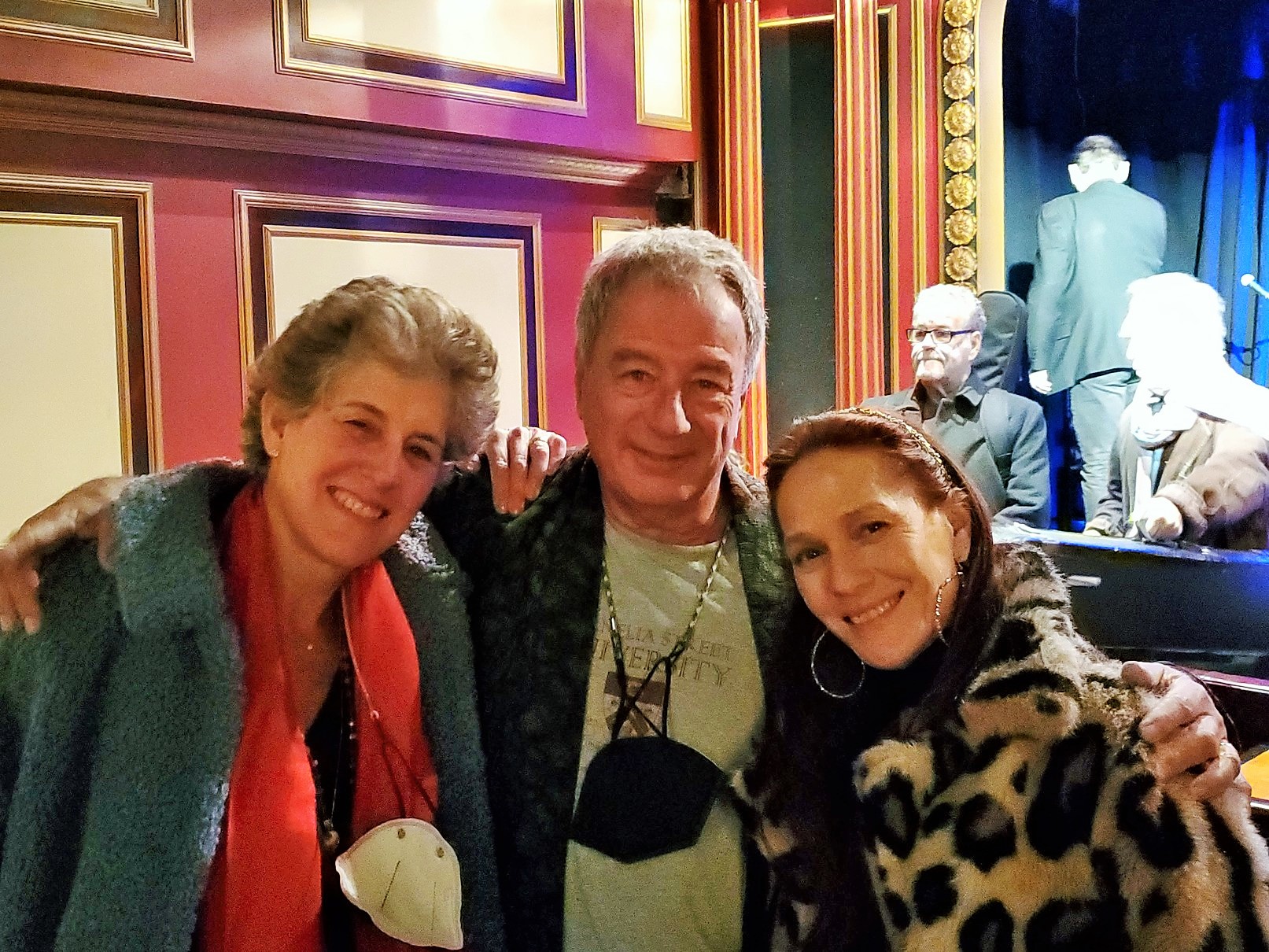 Robin Hirsch, with his wife, Leona, left, and musician Hannah Reimann, at his birthday bash at the Triad. (Photo by The Village Sun)

BY THE VILLAGE SUN | Friends came together at the Triad Theater on the Upper West Side last month to celebrate — and perform for — Robin Hirsch, the former proprietor and impresario of the Cornelia Street Cafe, for his birthday.

Unfortunately, due to skyrocketing rent, the cafe, after a 41-year-run, closed at the end of 2018. Since then, from time to time, Hirsch, who just turned 80, has held “Cornelia Street in Exile” events. This definitely could be called one of them.

Assembled at the Nov. 14 bash was an all-star cast of stellar talent who, over the years, played the cafe’s railway-car-narrow downstairs performance space. There were musicians, comedians, a magician, even a politician.

Fresh off recently performing the album “Blue” at 54 Below for Joni Mitchell’s 79th birthday, Hannah Reimann sang an aria by Vivaldi. Singer/songwriter Cliff Eberhardt crooned his wry take on a lackluster weekend, “Saturday Night.” David Massengill, a master of the dulcimer who was Dave Van Ronk’s protégé, performed “We Will Be Together,” a beautiful song of enduring love.

Katie Down, who used to do the “entertaining science” sketches at Cornelia — when she would play “weird instruments” — did a fun ukulele tribute to Hirsch. There were film clips of past performers, such as the Saw Lady.

Eberhardt noted he was an aspiring young singer in the Midwest when he read a New York Times article about the music scene at Cornelia Street Cafe, and promptly headed to Greenwich Village to make his name, and stayed.

Stan Baker a.k.a. “The Human Television,” who used to perform in Washington Square Park, did stand-up, though sans his traditional TV frame. Another comic who launched her career with help from Hirsch’s supportive stage, Jennifer Rawlings, flew in from California just for the shindig. Magician Mark Mitton made wine bottles — one of oenophile Hirsch’s favorites — multiply miraculously.

“Bottchermania” continued as Councilmember Erik Bottcher — who only started taking guitar lessons on Zoom over the pandemic — strummed a song. Hirsch, who is a writer, read a passage from one of his own books.

It was actually a twofer since it was also the birthday party of David Amram, 92. A legendary multi-instrumentalist and composer, Amram was friends with the likes of Beat luminaries Jack Kerouac and Allen Ginsberg. His birthday falls the day after Hirsch’s, and it’s become tradition for them to have a joint celebration. Amram performed a piano rendition — leading in first by playing an intro on banjo — of his classic Beat anthem “Pull My Daisy,” chock-full of Kerouac anecdotes, ad-libbing and wild scatting.

Afterward, he thanked Hirsch for having provided a place in the Cornelia Street Cafe for people to express their creativity.

“We’re all born creative until we’re told that we’re not,” he said. “Robin, you reminded us all of that.”