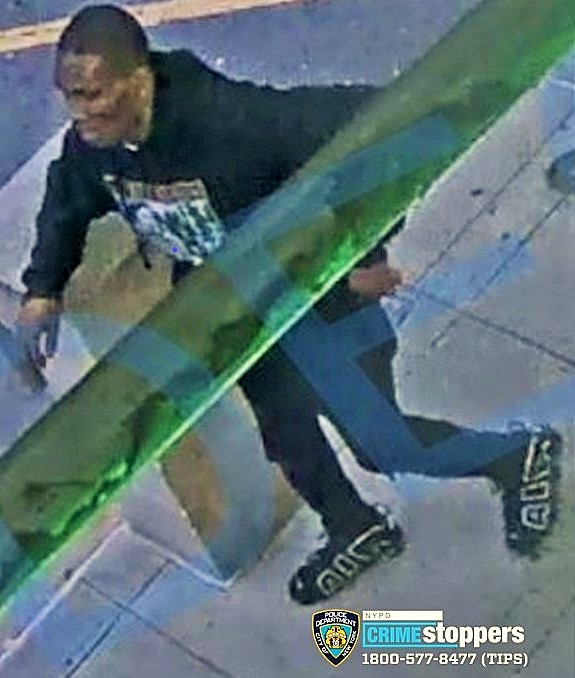 A surveillance image of a man police say they want to question in connection with a murder in the East Village on July 14. (Courtesy N.Y.P.D.)

Cops release photos of First Ave. murder suspect; Was weapon a gun or an ice pick?

BY THE VILLAGE SUN | Police released surveillance photos of an alleged suspect in a July 14 homicide in the East Village.

Around 6 a.m. that day, police responded to a 911 call of an unconscious man at First Ave. and E. Sixth St. E.M.S. arrived at the location before police and removed an unresponsive 37-year-old with a puncture wound to his chest to Mount Sinai Beth Israel, where he was pronounced dead.

The victim was identified as Marvin Bellamy, 37, from 860 Columbus Ave., in the Upper West Side’s Frederick Douglass Houses.

At the crime scene, a news photographer told The Village Sun he had gotten a shot of a bloody knife that was recovered.

However, last Thursday, a police spokesperson told The Village Sun that, according to the information he had available at the time, the victim had died of a gunshot wound to the chest.

On Tues., July 20, another police spokesperson confirmed that, in fact, there are still questions about the nature of the murder weapon.

“No update,” he said. “It’s a puncture wound. The last we had was not determined whether it was a cutting wound or a bullet.”

The medical examiner is determining the cause of death.

In the new surveillance photos, the suspect is wearing a back hooded sweatshirt with a design on the front, black pants and what look like black Nike Air More Uptempo sneakers.

Meanwhile, early-rising East Villager Jack Brown, who came upon the victim on his way to the park, gave The Village Sun the following firsthand account, including some possible insight into the murder weapon:

At 6 a.m. Thursday, July 14, I was walking to Tompkins Square Park. After crossing First Ave., I turned uptown and saw a body facedown on the sidewalk just north of the front door of McDonald’s between 6th and 7th Sts.

A Hispanic man using his cell dialed 911 and gave it to me.

I reported the man on the sidewalk. I gave the location and returned to the man by McDonald’s.

After about 4 minutes an F.D.N.Y. ambulance came heading west on 7th St. It circled down 2nd Ave. and came east on 6th, then pulled in next to the curb by McDonald’s. Two Asian E.M.S. techs jumped out. There was still no sign of life from the body.

Just prior to the arrival of E.M.S., two associates of the man on the sidewalk showed up. They were very concerned. The cell phone belonging to the downed man had been ringing steadily. One of the pair spoke to the man he called his brother. He listened for a heartbeat.

Subsequently, four of us turned the man on his back and on to the stretcher. Then the stretcher was lifted into the back of the E.M.S. ambulance. The man’s two friends wanted to go inside the vehicle, too, but were kept out.

One of the friends asked me, “What do you think happened?”

“Did he foam at the mouth?” he asked.

Another E.M.S. ambulance from Mt. Sinai showed up. I went to the 9th Precinct to report the incident. Then I went to Tompkins Square Park to exercise. On my way back, the block was sealed off. The female police officer who took my information on Fifth St. was working the street.

A neighbor said that he’d heard on the news that Sammy’s Halal had been robbed that night of $1,900. Sammy’s is across the street from McDonald’s on the west side of First Ave.

Subsequently, I was contacted by a detective from the 9th Precinct. He said the victim had been stabbed with a thin implement. Think ice pick. I said, “I didn’t see a drop of blood on the sidewalk.”

It was possible the victim had been killed elsewhere and dumped, I offered. The detective said he would note that. Friday morning in the park, a friend said that a man had been stabbed on 13th St. Thursday morning. It was possible that he had made it to McDonald’s and bled out into his clothes. There may have been more than one layer.

My friend has personal experience with knife wounds. He once fought three men at once. What he thought were punches to his left side were actually knife wounds. He’d been stabbed. He walked from Avenue C and 4th St. to Beth Israel.

“You haven’t been in a fight unless you get beat up some,” he explained. “The blood doesn’t spurt like in the movies. It takes time to emerge.” Also, his clothes soaked up the blood on his walk to B.I.

When a detective called later on Thursday, I mentioned that prior to the renovation of McDonald’s, OD bodies had been dragged out of the bathroom there regularly.

“I know that one,” he responded.

“McDonald’s, the choice of New York dope fiends,” I said.

We both got a laugh out of that.

“You’re a good citizen,” the detective told me. “In 10 minutes before you arrived, four people had passed the man by: joggers and a man in a wheelchair.”