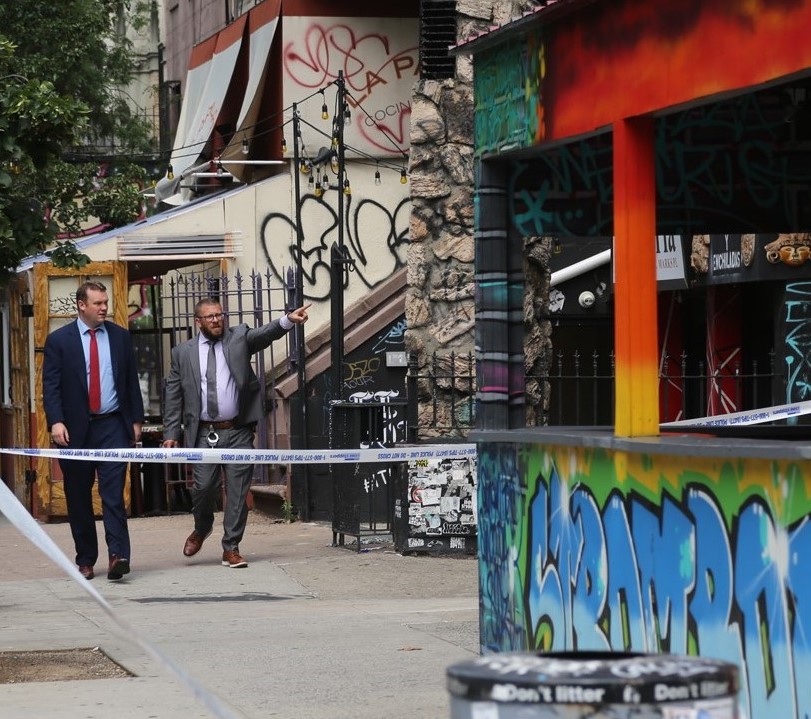 Detectives worked the crime scene on Wednesday afternoon outside Stromboli Pizza. The killer reportedly may have been in the pizzeria before the shooting. (Photo by © Jefferson Siegel)

BY JEFFERSON SIEGEL | A man was gunned down in the East Village early Wednesday morning and the killer reportedly may have been in Stromboli Pizza beforehand.

According to police, officers responded at 6 a.m. to a 911 call of an unconscious male at First Ave. and Sixth St. However, E.M.S. responded to the location before cops arrived and transported the unconscious victim, 37, with a single gunshot wound to his chest, to Mount Sinai Beth Israel Hospital, at 17th St. and First Ave., where he was pronounced dead at 6:48 a.m.

The victim was identified as Marvin Bellamy, age 37, of 860 Columbus Ave., in the Frederick Douglass Houses on the Upper West Side.

The Medical Examiner will determine the cause of death. There are no arrests and the investigation is ongoing.

As of around 2 p.m. Wednesday, First Ave. was still closed to traffic from Fourth to Ninth Sts. as police conducted an investigation.

One news photographer said he got a photo of a bloody knife being recovered by police at the scene. While one source said it was a stabbing, another said a shooting. Police did not mention anything about a knife being involved, though.

An area in front of a building on Sixth St. between First and Second Aves. was cordoned off but there was no sign of blood.

Stromboli Pizza, on First Ave. at St. Mark’s Place, was also cordoned off early Wednesday afternoon and there were several detectives inside. The pizza place’s owner said they were reviewing surveillance video. Apparently, the suspects may have been inside Stromboli just before it closed at 5 a.m.