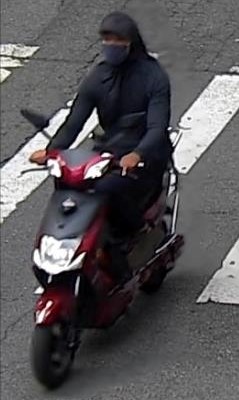 Cops said in one case the suspect fled on a red moped. (Courtesy N.Y.P.D.)

Police on Friday announced an arrest of a suspect in a recent spate of gropings of women in the Lower East Side, East Village and Nolita.

James White, 37, of 234 E. 32nd St. in Kips Bay, was charged with six counts of forcible touching of intimate parts, 11 counts of act in a manner injurious to a child and one count of sexual abuse of a victim under 13 years old.

He is accused of accosting one female on Aug. 21 and three on Aug. 26. Two of the victims were minors, one age 15 years old and another just 11. The other two women were 20 and 31 years old.

In each case, the man allegedly grabbed the victim’s chest over her clothes, then fled. In one incident, the suspect was seen riding a red moped.