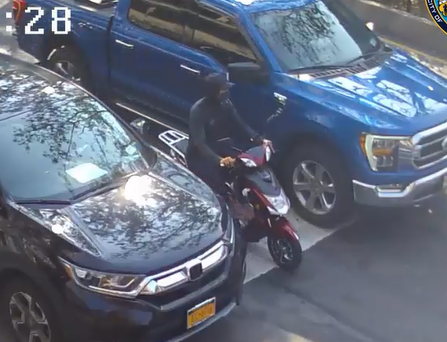 After one incident, on the Lower East Side, the suspect was seen riding a red moped. (Courtesy N.Y.P.D.)

BY THE VILLAGE SUN | A groper has been running — and riding — wild Downtown, accosting females, two of them as young as 15 and 11.

Police said there have been at least four “forcible touching” incidents. In each case, the man grabs the victim’s chest over her clothes.

In the first incident, on Aug. 21, around 4:45 p.m., the suspect approached a 31-year-old woman at Centre and Broome Sts. and grabbed her chest over her clothes.

On Aug. 26, about 4:20, the same man, according to police, approached a 15-year-old girl at Hester and Eldridge Sts. and, again, grabbed her chest over her clothes.

On the same day, five minutes later, he targeted a 20-year-old woman near 315 Grand St., at Allen St., again attacking her with the same M.O., grabbing her chest.

A bit later that day, at 5:40 p.m., up in the East Village, the suspect approached an 11-year-old girl at E. Sixth St. and Avenue A, grabbing her chest.

After the third incident, he was seen riding a red moped, traveling northbound on Allen St. and making a right turn onto Broome St. Police provided surveillance video from this incident.

Anyone with information is asked to call the N.Y.P.D.’s Crime Stoppers Hotline at 1-800-577-TIPS (8477) or for Spanish, 1-888-57-PISTA (74782). Tips can also be submitted on the Crime Stoppers Web site at WWW.NYPDCRIMESTOPPERS.COM or on Twitter at @NYPDTips. All tips are strictly confidential.