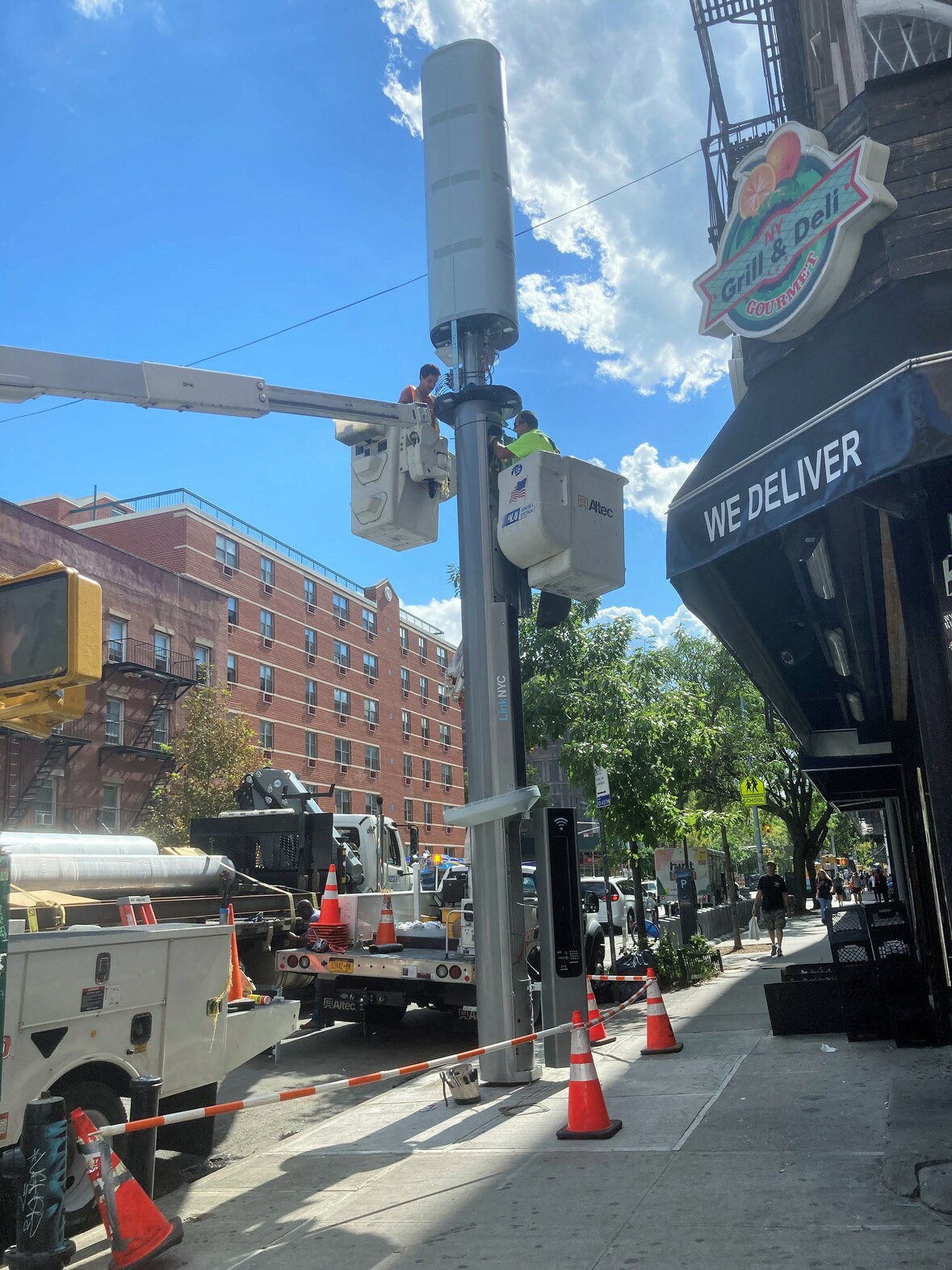 One of the new, three-story-tall 5G towers being installed on Avenue A in September. (Photo by Paul DeRienzo)

BY LINCOLN ANDERSON | There are a lot of questions and concerns about the city’s scheme to install a series of 32-foot-tall 5G WiFi megatowers at a half-dozen spots around the historic West Village.

Thankfully, more information will be provided at a meeting of the Community Board 2 Quality of Life Committee on Tues., Jan. 17, starting at 6 p.m. The city’s Office of Technology and Innovation will make a presentation on the 5G LinkNYC towers, which are being installed as part of a contract with the private company CityBridge. To register for the virtual meeting, click here.

The city, which plans to install thousands of the giant-microphone-resembling poles around the Big Apple, has mandated that 90 percent of the new transmitting towers be earmarked for underserved communities — which the affluent West Village definitely is not.

Patch recently reported that the West Village locations slated for the mammoth megapoles include 99 Gansevoort St., 99 Jane St., 100 Jane St., 113 Jane St., 820 Greenwich St., 445 West St. and 771 Greenwich St. The article noted the city “aims to deploy 2,000 of the towers in the coming years, focusing on the outer boroughs and Manhattan north of 96th Street.”

For some reason, though, the West Village has been tagged to get a share of the monoliths.

In addition, in September, one of the Behemoth-sized signal-beamers was erected in the East Village, at Avenue A and E. 12th Street.

Speaking in July at the installation of the first 5G tower, in the Bronx, O.T.I. Commissioner Matthew Fraser said, “Today’s Link5G launch is a mark in the next evolutionary step for Link New York City, a project that approximately seven years into its existence, continues to fill a profound need in the daily lives of million New Yorkers and visitors to our great city. But more importantly, today’s Link5G launch represents a dramatic leap forward in New York City’s efforts to bridge its long-standing digital divide.”

The contentious poles are part of the LinkNYC program, which operates the existing, smaller-sized WiFi kiosks that dot the sidewalks.

The prospect of the “Star Trek”-like structures being plopped down in the historic neighborhood is not sitting well with residents and preservationists.

One resident, requesting anonymity, told The Village Sun that she was outraged at “the city’s efforts to have CityBridge install a multitude of ugly, obtrusive and unnecessary 5G towers in our area without effective public review.”

On Thurs., Dec. 12, Anna Marcum from Village Preservation proactively made a presentation to the C.B. 2 Landmarks Committee about the colossal communication posts, also shedding some light on the contractor, CityBridge.

As pointed out at the meeting, the Adams administration and CityBridge are claiming that the West Village is a “digital desert” that desperately needs an upgrade in broadband service.

Some also have concerns about the potential health impacts of 5G. The new technology uses higher-frequency waves than the current 4G, allowing for much faster download speeds for movies, video games and the like.

Three years ago, as the industry was starting to hype the new bandwidth, fears about it were aired during A Global Day of Protest To Stop 5G in Earth and in Space. At the New York City event, in January 2020, around 75 people packed a meeting room at a school building in Murray Hill.

Addressing the concerned crowd, one of the speakers warned, “We are really at the crossroads where we are going to have to choose the path of life or the path of death.”