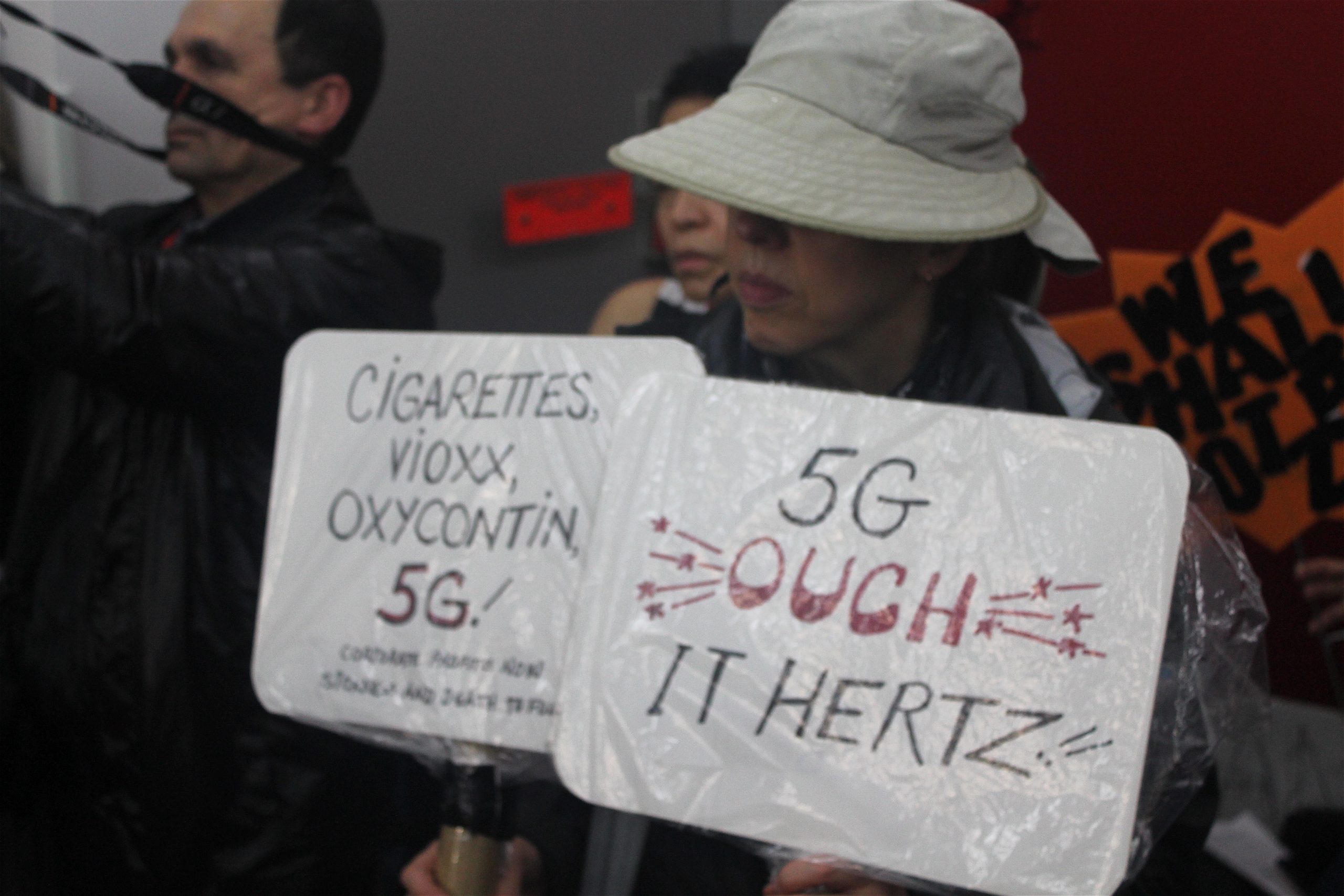 BY LINCOLN ANDERSON | It was pouring rain on Saturday afternoon, but that was O.K. — at least the torrent of water hurtling down was all natural.

What the 75 damp souls gathered at a school meeting room in Murray Hill were concerned about was something else that is already starting to fill the air — namely, 5G.

Call it the Resistance — the 5G Resistance, that is.

5G, or the fifth generation of cellular networking, is currently being rolled out by service providers like Sprint, Verizon and T-Mobile.

Using higher-frequency millimeter waves, as opposed to microwaves, 5G can carry more data faster, so that downloading a movie, for example, will take mere seconds instead of a few minutes.

But while gamers and movie buffs no doubt are salivating for their 5G, the crowd gathered at the Maryel School, at 28 E. 35th St., saw the new technology as nothing short of an environmental crisis.

And they were not alone. Last Saturday was billed as a “Global Day of Protest To Stop 5G in Earth and in Space,” with events allegedly happening in more than 250 cities across the planet.

Antennas were another worry for the groups gathered around the globe on Saturday. Specifically, the 5G network will need a lot more antennas — probably three per New York City block — because the transmission range for millimeter waves is shorter and it’s a line-of-sight signal. That means the antennas will be nearer to more people.

(A Web site, antennasearch.com, purports to show where all the wireless and radio antennas are within one mile of a given location.)

The Manhattan event was organized by a group named NYC 5G Wake-up Call. Camilla Rees, one of the speakers, is the author of “The Wireless Elephant in the Room” and publisher of “Re-inventing Wires: The Future of Landlines and Networks.”

“We are really at the crossroads where we are going to have to choose the path of life or the path of death,” she told the group ominously.

As much as the focus was on fear of the alleged physical health hazards posed by 5G, there was also condemnation of how tech is undisputedly reshaping our lives — for the worse, the 5G foes contend.

Americans reportedly now spend an average of something like six-and-a-half hours online each day, if reports are to believed. And, of course, office work for many of us increasingly amounts to staring at a screen all day.

At dinners nowadays, people are often more tuned into their phones than connected with their loved ones and family members.

“People aren’t fully present — does anybody feel that?” Rees asked.

“Yeah,” “Sure,” members of the audience murmured knowingly.

Another part of the protest against 5G — and the entire tech culture — is the constant, voracious harvesting of our data.

“Acknowledge the fear and the rage,” Rees told the group. “Putting these antennas up inside and outside…in outer space, and collecting data. It’s all about data.”

There was also a backlash against the whole idea of “smart” appliances — the so-called Internet of Things — which, the environmentalists say, are actually making us dumber.

“We don’t need someone to tell us that eggs are low in the refrigerator,” Rees scoffed as the audience chuckled. “We don’t need a lot of things, thank you very much.”

A sign on the wall behind her said: “Smart Homes?!” with SMART as an acronym standing for “Secret Militarized Armaments in Residential Technologies.”

There are comforters that now roll themselves up and make the bed when we get up in the morning, she noted.

“Psychologically, they’re disempowering us,” she said, “dumbing us down — and making us redundant.

“It boils down to three words — we want wires,” Rees said. “We want wires — and not antennas.”

As other speakers pointed out, landlines — especially fiber optics — are actually faster than WiFi.

Speakers at several points referred to the Irregulators case, which charges that the Federal Communications Commission and service providers conspired to avoid putting in landlines, while favoring wireless. The last 30 percent of wire and / or fiber optics that was promised has not been installed, speakers stressed.

The event’s emcee, Donna Gianell-Romo, also slammed Amazon, which is pushing the tech revolution, as well.

“Amazon is taking over the world and putting up all of these satellites,” she railed.

“Use IndieBound instead!” a man called out, referring to a site for local independent bookstores.

Speaking of space, the protesters are also concerned about the effects of launching a virtual armada of new 5G satellites, which they warned would add to the proliferation of “space junk,” creating an overcrowded “debris belt” that would only create more problems.

So they are signing on to a cover letter for a “space appeal” to the two ambassadors from the U.S. Mission to the United Nations.

“We are stating that this vast expansion of wireless transmissions set to be implemented worldwide with 5G, and launched in Earth’s ionosphere and magnetosphere,” the letter says, “is being rushed forward with insufficient precautionary research, and dismissal of thousands of independent, peer-reviewed studies showing clear evidence of harm from pulsed, data modulated, radio frequency modulation.”

In short, Les Jamieson, another speaker, said they are calling for a moratorium on 5G until it has been studied more thoroughly.

“People are becoming aware that we are being surrounded by 3G, 4G and 5G and WiFi devices at work and in our homes,” he said.

To actually get 5G on their phones, people will have to buy new ones.

Jamieson added that wires are much more environmentally friendly than wireless.

“Driverless cars will be able to talk to each other [via 5G],” Jamieson shrugged. “But do we need driverless cars?”

“Do we need any cars?” a man shouted out.

According to Jamieson and the other speakers, 5G simply has not been sufficiently tested, in terms of its health impacts.

“Much of this is a race against China,” he asserted.

Jamieson is also a leading member of the 9/11 Truth movement, whose members dispute the official version of how the World Trade Center was destroyed and want a new investigation. This reporter recognized at least one other local 9/11 Truther in the room.

Jeannette Hassberg, another speaker, noted that WiFi microwaves in both Germany and Russia are set at a much lower frequency than in America — with Russia’s just 1/10th the power of the U.S. signal.

“Yet they communicate and take selfies and do everything they need to do,” she said.

Meanwhile, proponents of 5G — including CTIA, a wireless trade association, and The New York Times — charge that all the opposition and fear are being stoked by Russia, notably by the Russian network / propaganda outlet RT America. The network has done numerous segments on the alleged perils of 5G. Yet, the Times reported, Russia itself is moving ahead with 5G, while high-frequency millimeter waves are even being touted there as a health treatment.

The Times itself last year launched a “5G journalism lab,” feeling the new technology could “spark a revolution in digital journalism.”

It was noted at Saturday’s event that both major U.S. political parties support 5G, and that the much-hyped technology is even part of the Green New Deal.

“We should pressure people like A.O.C. She should be on our side,” one audience member called out, referring to the freshman congressmember, who is known for her copious tweeting.

After all the dire talk of what exposure to WiFi radiation might do to us — tumors, fibromyalgia and macular degeneration were just a few of the maladies mentioned — Gianell-Romo led the room in arm stretches, followed by butt-tightening exercises, to help release tension. Sitting too long can contribute to diabetes and anxiety, she noted.

The event wrapped up with everyone chanting, referring to the Irregulators case: “We already paid for fiber! We don’t want your 5G cyber!”

Which was followed by a folk band belting out a tune with the refrain: “Climate action now! Stop 5G now!”

Among the audience was a resident of Manhattan Plaza, the affordable performing-artists’ housing complex on W. 42nd St. The woman said she’s been feeling negative health effects since 5G antennas were installed on the place’s rooftop on Sept. 30.

“It’s been affecting me terribly, I can’t sleep,” she said, describing her symptoms as ringing in the ears, headaches and fatigue. “There’s a lot of people in Manhattan Plaza getting this.”

She said another woman has been trying to shield herself from the perceived impacts by sheltering in her bathtub.

“I don’t even use WiFi and now I’m being assaulted with it,” the woman lamented.

But Ellen Osuna, a member of NYC 5G Wake-up Call, said the idea really is to reach a happier median. The goal should be to keep wires while also keeping wireless transmissions in what the protesters feel is a safer, lower-frequency range, she said.