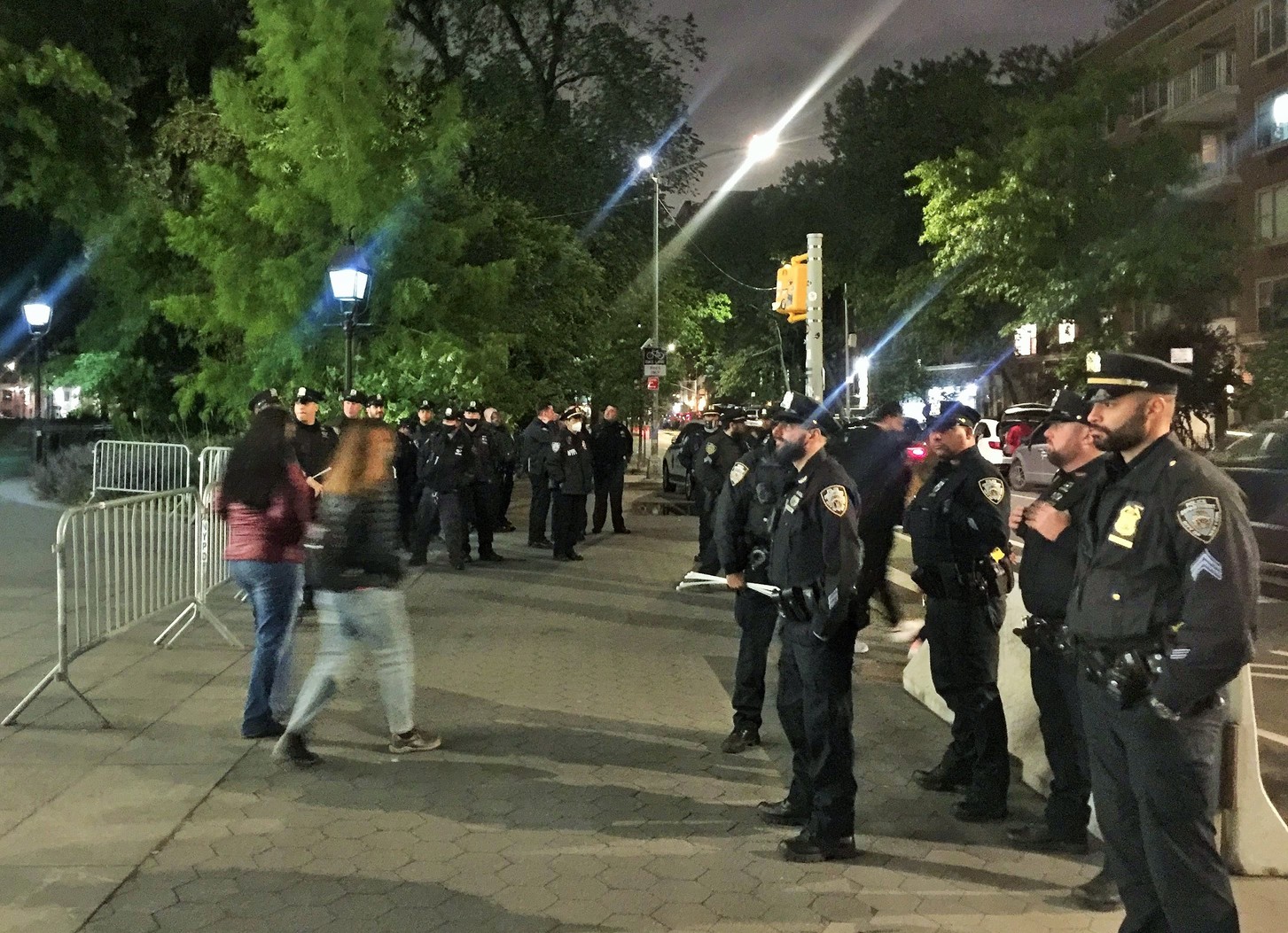 Police massed outside Washington Square Park on Saturday evening. A few bands were playing in the park but it was not as crowded and raucous as usual due to the weekend's rainy weather. (Photo by Sharon Woolums)

BY THE VILLAGE SUN | Updated June 1, 12:45 a.m.: Rainy weather dampened the impact of the new police crackdown on loud music and late-night revelry in Washington Square Park this past weekend.

Nevertheless, cops still turned out in force each evening to ensure that no one was violating noise codes and that the park would be cleared in time for its early closing.

In these photos, from Saturday night, the large detail of police were not wearing riot helmets, unlike the previous weekend when the initiative kicked off.

As The Village Sun first reported, the Parks Department and Police Department have agreed to close the park at 10 p.m. on Fridays through Sundays for the next several weekends due to ongoing issues with “amplified sound and other conditions.” The “other conditions” included partying in the park going on past its curfew.

Reportedly, a small group of parkgoers have been “causing issues” at night when police move to close the park. This group, according to police, drinks, makes noise and stays late in the park most evenings and pushes back on the attempts to close the park.

Under the plan, the cops will be showing up in force at Washington Square, starting at 6 p.m., on weekends and telling people they cannot set up electrical amplification equipment. Then, an hour or two before the park’s closing, all loud music will be stopped by police and Parks Enforcement Department officers. Police will then sweep the park, moving from north to south, pushing everyone out.

The early-closing plan reportedly was hashed out between the Village’s Sixth Precinct and Parks senior officials. It was decided that the crackdown would launch “after the N.Y.U. students went home” at the end of the semester.

The initiative comes in response to neighbors’ and business owners’ cries for enforcement as they feel the park has spiraled out of control. A few weeks ago a form letter was sent to local politicians, city agencies and the community board demanding enforcement of the park’s curfew, plus an end to “amplified music that runs well past midnight,” and decrying the trash that remains in the park after late-night events — including broken glass and human waste — as well as graffiti, drug dealing and drug use, selling of stolen goods in the park from local stores, junkies openly shooting up and having sex, and bikes, skateboards and electric scooters being ridden in the park.

“Our goal is to bring awareness to our elected officials, community associations and city agencies,” the letter said, “that we will no longer tolerate the illegal activity within WSP and spilling out into the immediate Greenwich Village neighboring areas.”

The issue is coming to a head after a year like none other. Last summer the park was the frequent site of Black Lives Matter protests. Also, like all parks, Washington Square has been especially heavily used during the coronavirus pandemic. Dance clubs, for one, are still closed, which might partly explain the ongoing dance parties in the park.

All that said, after the park’s intense year of use — and some would add, misuse, too — local residents frustrated by the noise and the square’s condition are demanding action.

In addition, police have closed off the park’s northwest corner, which — in a situation that predates the pandemic — has been the scene of a bustling drug market for years. Part of the purported benefit of the historic Village park’s most recent years-long renovation project, which lasted from 2007 to 2014, was to “open up sightlines” in the park, in order to deter drug dealing. Despite opening up the views, though, enforcement has been lacking.

Also, the park’s restrooms have been closed at least for a week. The public reason given is that some plumbing work needs to be done on them. But junkies had been shooting up in the stalls, nodding out and causing long lines outside. So, the thinking apparently goes, closing the bathrooms will help curb the drug scene, at least for a while. Police cannot make drug arrests unless they actually see the drugs, which is part of the reason the users lock themselves in the bathrooms. PEP officers can’t break down the stall doors, so it can take hours to talk the users into coming out. Some wonder why police officers are not simply posted in front of the bathrooms, though it’s reportedly a staffing issue for the precinct.

Vandalism in the park has also been an issue, including now-constant graffiti. Two Fridays ago in the early morning, someone whipped up a froth of red bubbles in the fountain by dumping two containers of laundry detergent and red dye into it.

The Parks Department plans to install “No Skateboarding, Bicycling or Scooter Riding” signs at each park entrance and on the four globe light poles of the fountain plaza.

For one longtime Villager, now in her early 70s, of all the park’s myriad issues, skateboarding actually is her number one concern.

“There are many who feel that the park has been a free-for-all, very dangerous,” she said. “You could get killed. I’ve seen too many times when they do these tricks — the skateboard leaves them and goes flying and could hit a senior. It could injure or maim them.”

The woman spoke on condition of anonymity because she did not want to be targeted by opponents of the crackdown. She said, though, that most of the members of the senior center she attends on Washington Square North, like her, are afraid to use the park for fear of being knocked down and breaking a hip.

“Once an older person loses the ability to walk, you’re done for,” she said. “That’s when you go downhill. Everybody I talk to feels this way [about the park], especially older people.”

“I used to walk in that park,” she said, “and I used to see a dozen people my age I know. Now, never.

“Why should seniors have to wade through a minefield to find somewhere to sit?”

She wondered if there would be lawsuits if a senior gets injured by a skateboarder.

She said instead she now sits in the much smaller Bleecker Park, at Bleecker and W. 11th Sts.

As opposed to Washington Square Park, the setup skateboarders have in Tompkins Square Park, where they have a whole blacktop area of their own, is fine, she said.

She felt bad that now everyone must suffer shortened park hours during the crackdown. But it never had to get to this point, she noted, saying, “It’s simple! Enforce the laws!”