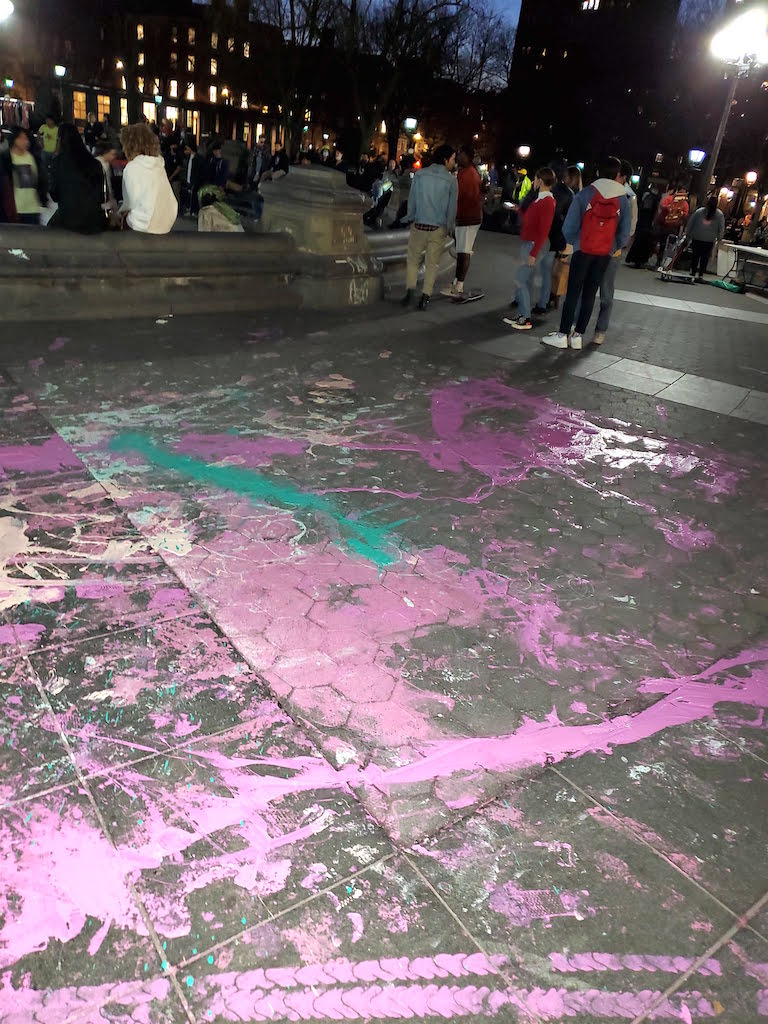 BY THE VILLAGE SUN | Washington Square Park on a balmy Sunday night was full of its now-normal sights, sounds and smells: amplified music, people dancing to it, skateboarding — both inside and outside of the fountain — pot drifting in the air and, of course, lots of people just hanging out and enjoying the park.

Over all, it was a peaceful, fun vibe.

But a new element — paint — was abruptly added to the mix, when sometime around 7:30 p.m. a guy came and dumped dark pink paint, along with smaller amounts of light green and salmon-colored paint, on the paving just to the north of the fountain, then split.

The paint was still wet — and getting on people’s shoes — as an artist from Bushwick was packing up his canvases and readying to leave the park. He said he had just missed the paint bombing. While he declined to say whether or not he approved of the act itself, he worried that it could have a negative impact on artists who sell their work in the park.

“The sentiment of all the artists — this was uncool,” Conor Brewster, 29, said. “I’m against the consequences that could come against everybody — whatever the [vandal’s] message was.”

He said he had created a lot of paintings during the pandemic and was now eager to sell his finished works in the park.

A man who witnessed the splatter act and requested anonymity, said, “I don’t know what it was. He just came out and dumped his paint…20 minutes ago.”

Some of the paint was smudged on the historic Washington Square fountain, possibly from people trying to wipe it off their shoes or climb into the fountain to sit down inside it.

Meanwhile, on the opposite side of the park, just outside the fountain’s south side, a man sat on a speaker that was blaring out dance tunes, which he queued up with his phone. It wasn’t exactly a huge dance party at that point. But when he put on “Macarena,” a bunch of people here and there started dancing along.

Asked if he had a sound permit, the deejay just looked away. He said he lives on Varick St. He said he was definitely looking forward to dance clubs reopening.

On the fountain plaza’s west side, a funk band with an amplified bass and a singer was playing P-Funk’s classic hit “Flashlight.”

Meanwhile, sitting huddled together underneath the arch next to one of the pillars — no doubt, taking advantage of the structure’s unique acoustics — a group was playing amplified spacey synth music, along with electric guitar and chanting. They sounded good — but they didn’t want to be filmed.

At first, in a move some protesters started using last year, the singer opened up an umbrella to shield the musicians from people trying to video them. For a while, he just twirled the umbrella, which likely had been brought along for that purpose. But he then told people, no filming allowed, as he threateningly shook a water bottle at them.

“No camera,” he told The Village Sun and another person, “or I’ll spray water on you.”

Again, the arch group’s music did sound good, and The Village Sun was recording — or thought so. Unfortunately, due to a phone overloaded with too many photos, only a 1-second video resulted. So the singer will be happy.

But maybe the same can’t be said for all residents around Washington Square, who, from inside their apartments, had to listen to all of the group’s electronic beeps and boops, plus the park’s other music and the jarring “clack! clack-clack! clack!” of skateboards.

As for amplified music in the park, in general, Everynight Charley Crespo, The Village Sun’s live-music expert, said it’s an ongoing situation. Technically, a permit is needed for amplified sound in parks.

“That dance party in Washington Square Park happens every night,” he said. “I have walked past it on weeknights and weekends. Sometimes they have a live drummer, as well, who drums along with the recorded music. The people dance very close together. I have not noticed if they were wearing masks.

“This past Friday, three different boomboxes were blasting in different areas of the park. The one on the south side of the fountain is the one that gets all the attention every night, however.”

As for the city’s dance clubs reopening, Crespo said, “I suspect Governor Cuomo has not thought out a policy for dance clubs, but they might get away with falling under the arts and entertainment clubs that can reopen on April 2.”

Meanwhile, Captain Stephen Spataro, the commanding officer of the Sixth Precinct, recently said he has assigned two officers to Washington Square to help tackle its entrenched drug problem, as well as educate people that biking and skateboarding are not allowed in the park. He stated that amplified sound in the park without a permit — no matter what the amplifier’s power — is not allowed.