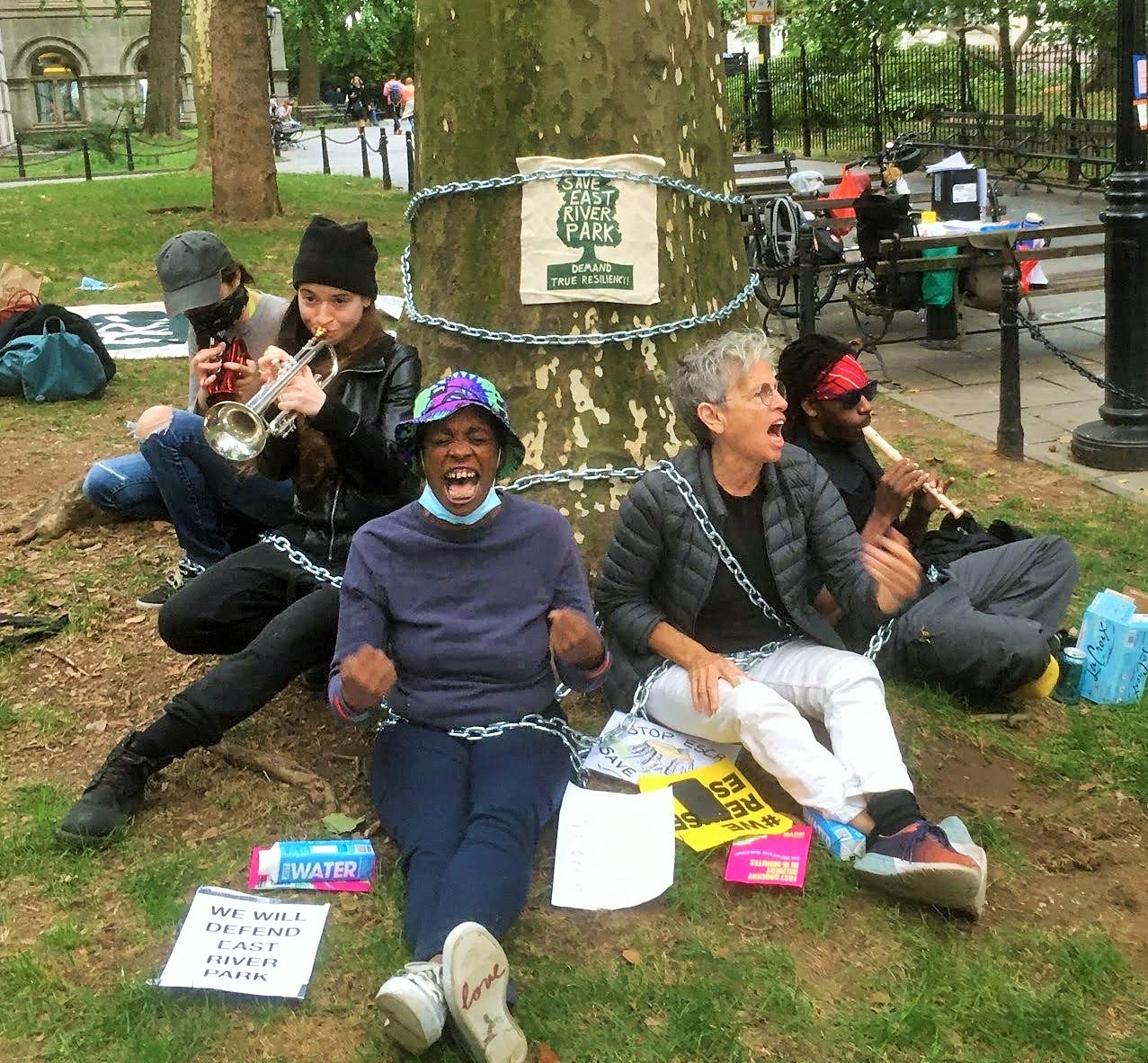 Tree-mendous effort: East River Park activists have been protesting in City Hall Park every day this week, calling for an emergency oversight hearing on the looming East Side Coastal Resiliency megaproject.

BY LINCOLN ANDERSON | Updated Oct. 8, 1 p.m.: Council Speaker Corey Johnson on Thursday finally spoke with East River Park activists who have been staging a weeklong protest outside City Hall. He talked with them for about 25 minutes, though claimed that he was not aware that they — and allegedly two key councilmembers — have been urging him to hold an emergency oversight hearing on the city’s coastal-resiliency plan that would destroy the current 60-acre park.

Later on, after Johnson left, Chelsea Manning, the U.S. Army whistleblower and trans activist, dropped by to show support for the protesters and pose for photos with them, hanging out with them for about an hour.

First of all, Johnson said, the three councilmembers whose districts include or are near the park — Carlina Rivera, Keith Powers and Margaret Chin — must all agreed to hold the emergency hearing. He said this concept of “member deference” has been the norm in the City Council for the past 35 years, including under the previous four speakers.

“Carlina won’t respond to us on any level,” one of the activists told him.

The activists say that Justin Brannan and James Gennaro, who respectively chair the Committee on Resiliency and Waterfronts and the Committee on Environmental Protection, have told them that they have told Johnson they want the hearing — but Johnson said that wasn’t the case.

“My understanding is that no hearing has been requested,” Johnson stated. He said there would need to be “an official request” for a hearing, then followed by “a conversation within the body.”

At a couple of points during the talk, Johnson, who wore a black face mask, took a few steps back and warned that he had to get a COVID test.

Charles, who lives in the Vladeck Houses, a Lower East Side public-housing development, broke into tears as she told the Council speaker how important the park has been to her, both physically and mentally, how she was able to drop from 210 pounds by being able to exercise there.

Tears streaming down her cheeks, she told him, “You have [an alternate] way. There is a way to put the wall up by the F.D.R. and keep the water in the park.”

At the end of the exchange, the activists pushed Johnson for a follow-up meeting.

“I’m very glad we had this conversation,” he said. “I will talk to some folks [in the City Council] and try to get some information.”

Meanwhile, Wellington said the activists have to get things sorted out, too — mainly by checking to see if Brannan and Gennaro really did ask Johnson to hold the hearing. Brannan has notably not responded to the protesters’ requests to stand with them in City Hall Park.

City Hall Park has looked like a Houdini Con / outdoor dungeon — albeit with bullhorns and festive trumpets — this week as East River Park activists have been again chaining themselves to trees to protest the mayor’s contentious coastal-resiliency plan.

The previous week, two environmentalists, J.K. Canepa and jmac, locked themselves together in an embrace around one of the park’s trees for 12 hours, demanding that someone from Johnson’s office communicate with them about the East Side Coastal Resiliency plan.

East River Park activists have been calling for the City Council speaker to O.K. an emergency oversight hearing on the scheme, which would bury the existing 60-acre park under tons of landfill to raise it 8 feet to 10 feet above the floodplain and prevent another Sandy from swamping the East Village and Lower East Side. The activists endorse a much lower-impact plan that would not raise the park but just build earth berms along the east side of the F.D.R. Drive and add seawalls in other spots.

Meanwhile, work on the East River Park section of the city’s E.S.C.R. megaproject (which spans from Montgomery Street to 23rd Street), slated at a whopping $1.3 billion, is set to start imminently, word has it sometime in the next two months, explaining the activists’ constant presence outside City Hall this past week. Under the plan, East River Park’s nearly 1,000 mature trees — with a tree canopy that was 80 years in the making — would be clear-cut. 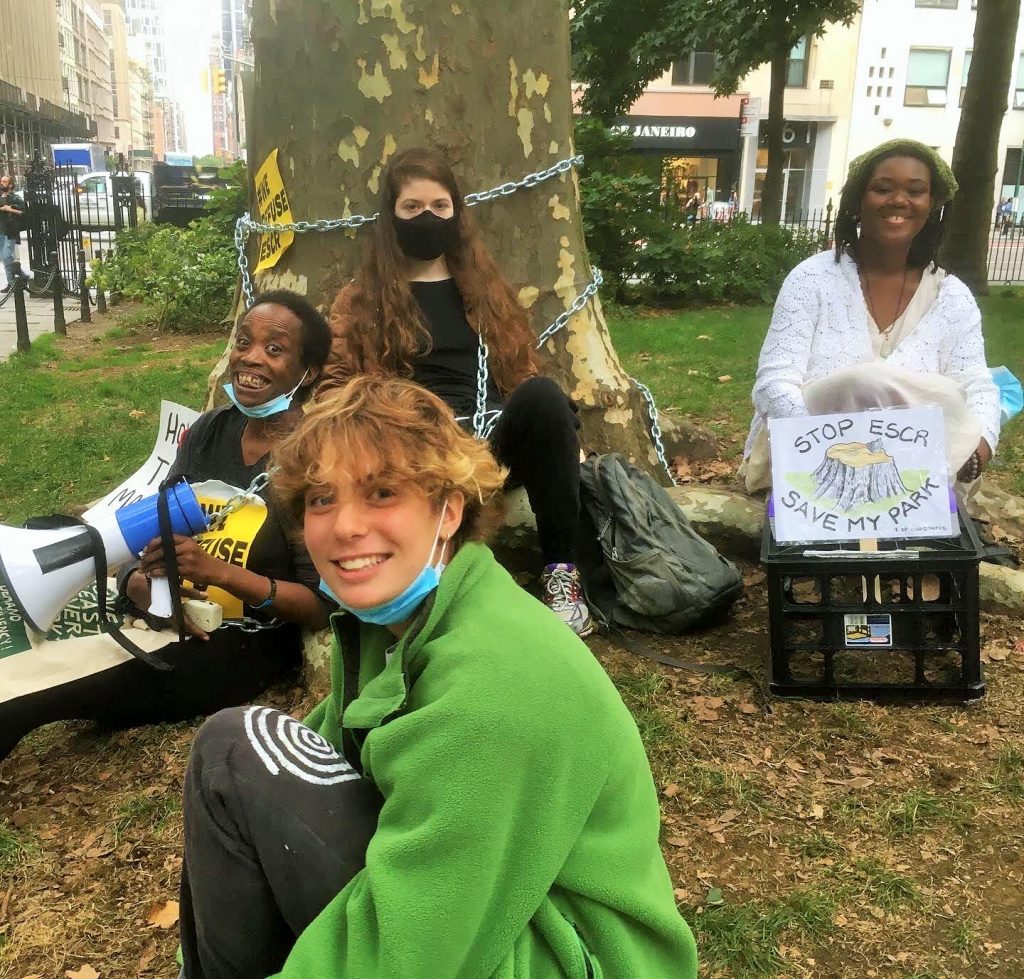 After Canepa and jmac unlocked themselves last Tuesday, Canepa warned that, unless Johnson or one of his staffers agreed to at least talk to them, they had better get used to the sight of environmentalists chained to trees outside of City Hall.

No one from Johnson’s office had reached out to them. So the activists made good on their threat, protesting in the park every day this week, starting Monday.

Similarly, a Johnson spokesperson has ducked responding when asked by The Village Sun if the speaker would green-light the emergency hearing. The paper first asked the question back in August and asked again last week. But Johnson has not commented on the issue. 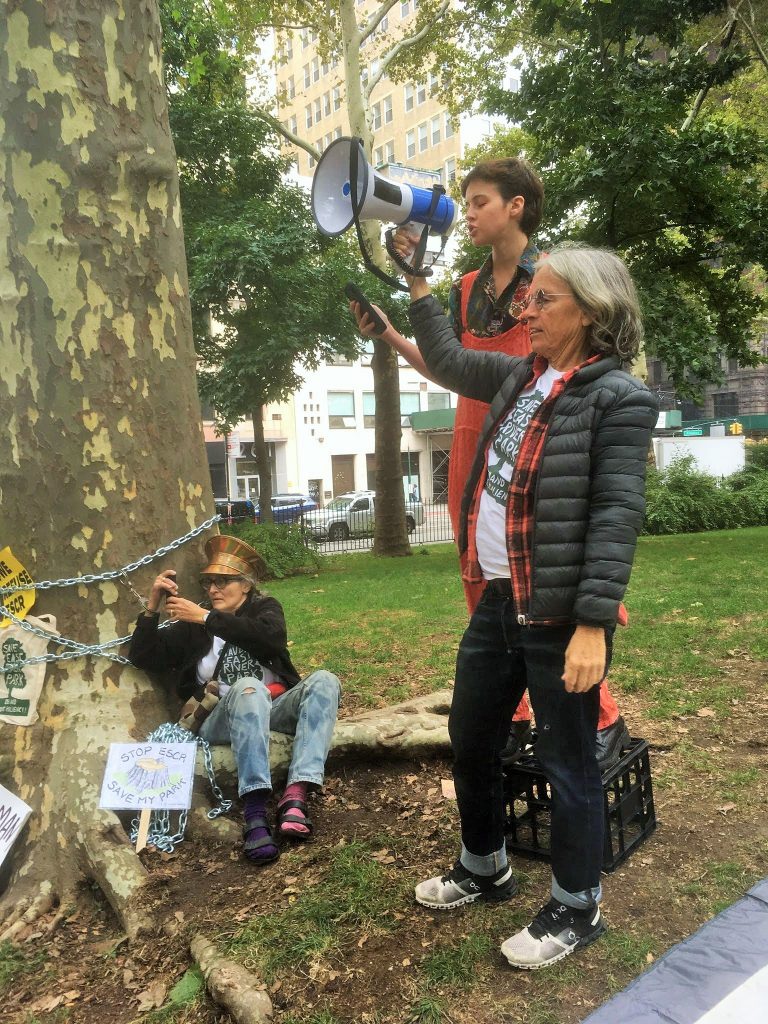 The City Hall Park protest will continue through this Friday, from 9 a.m. to 6 p.m., and the demonstrators are urging park activists to come join them. They are staging their actions just inside the park at Broadway and Warren Streets. 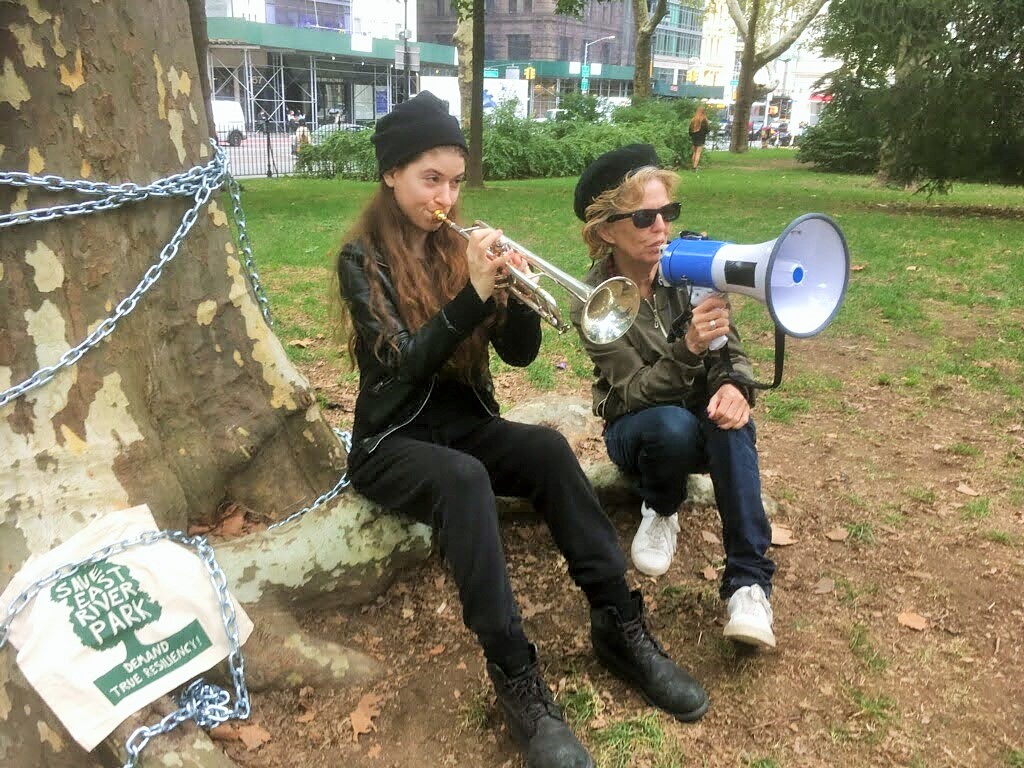 Wellington, one of the organizers, said the park activists have forged solidarity with a group of yellow taxi medallion owners who have been protesting outside City Hall for three weeks, 24 hours day, demanding debt relief. The two groups sometimes protest together.

“We’ve been saying, ‘Save our cabbies! Save our parks!'” she said. “They’re essential workers being left behind by de Blasio. There’s an epidemic of suicides among cabbies.”

The background din in the video with Johnson is from the cab medallion owners’ protest. 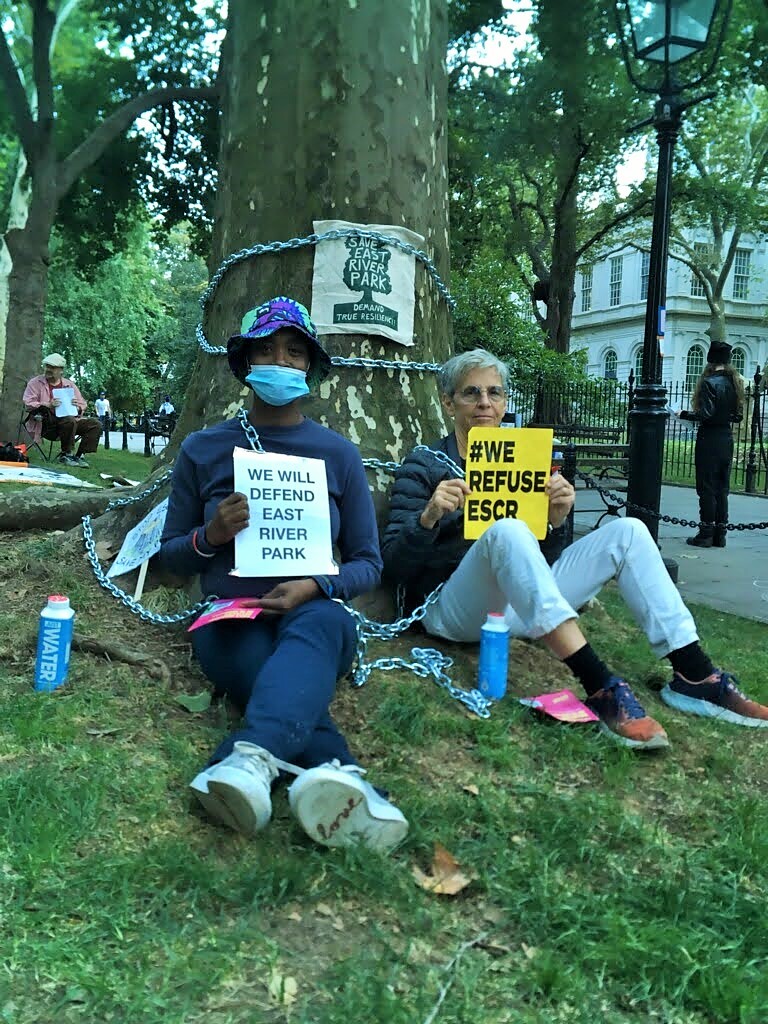 As for East River Park, the idea of closing it off to the public — even if the project, as planned, were done in two phases to keep part of it open — is crazy, she said.

“Where does de Blasio expect all these New Yorkers to go?” she asked. “They keep taking away public space.”

Speaking Friday afternoon, Wellington said the activists, while chained up to the trees, are also now strategizing on how they will lie down in bulldozers if they show up to destroy East River Park’s trees.

She said it was fitting that whistleblower Manning came by to show solidarity with them since the East River Park fight “is all about transparency.” A Value Engineering Report for the park project was hidden from the public for a year and a half until the activists forced its release.