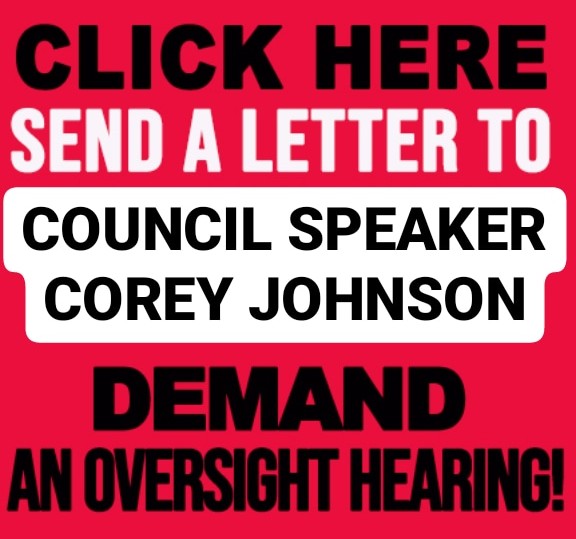 East River Park ACTION has been leading a letter-writing campaign to urge Speaker Corey Johnson to hold an emergency hearing on the coastal resiliency project, which would destroy the existing park, only to rebuild it 10 feet higher.

BY LINCOLN ANDERSON | Will he or won’t he? Either way, he’s not saying. …

East River Park activists have been furiously lobbying Council Speaker Corey Johnson to O.K. an emergency hearing on the city’s plan to pile the park with a 10-foot-high layer of dirt to turn it into a massive levee against coastal flooding.

The group East River Park ACTION has been spearheading a letter-writing campaign to Johnson, hoping to get him to green-light the critical public hearing.

The Council speaker, however, is keeping mum. In response to a question from The Village Sun asking if Johnson would allow the hearing, a spokesperson responded, “We decline comment on this one.”

Opponents of the $1.3 billion megaproject say two key councilmembers, Justin Brannan and James Gennaro, have told them they support holding the hearing — but, apparently, for this kind of hearing outside of the normally scheduled procedure, the politicians cannot move ahead without the powerful speaker’s consent. Brannan chairs the Council’s Committee on Resiliency and Waterfronts and Gennaro heads the Committee on Environmental Protection. Brannan told the activists he has asked Johnson to allow the hearing.

According to park activists, the East Side Coastal Resiliency project could start soon — they’re now being told in October.

Built in the 1930s by Robert Moses, the 46-acre waterfront park sports nearly 1,000 mature trees. However, all of these, plus the rest of the park’s flora, would be destroyed by the first-of-its-kind resiliency project. The park advocates support an earlier, simpler plan that mainly calls for a berm to be built along the east side of the F.D.R. Drive without elevating the park.

Tommy Loeb, a member of East River Park ACTION, called Johnson’s reluctance to consent to a hearing “kind of odd.”

“What we’re asking for is a purely an oversight hearing,” he said. “It’s kind of odd that the Council speaker would deny councilmembers an oversight hearing on about a $2 billion project that the comptroller has some serious questions about and that we have uncovered certain issues in the Value Engineering Study.”

Comptroller Scott Stringer recently refused to sign off on the contract for the East River Park work, asking, for one, why it did not meet the city’s 30 percent standard for contracting with Minority- and Women-owned Business Enterprises (M/WBE). However, Mayor de Blasio “overrode” Stringer’s objections and the contract was registered. East River Park ACTION members subsequently filed a Freedom of Law request asking to see all of Stringer’s objections to the contract.

The Value Engineering Study that Loeb referred to compared the earlier berms plan with the current park-elevation scheme. The city initially denied this report even existed, then, under pressure, finally produced it, though with heavy redactions. The park activists have since succeeded in getting more sections of the report unredacted.

This newly available material has, in turn, raised more questions about the resiliency plan, such as whether the berms option would really require Con Ed lines under the park to be moved or a lane of the F.D.R. Drive to be closed at night for the construction, whether the 1 million tons of landfill that would be involved would be nontoxic, and how the phasing of the overall project — which would allegedly leave 40 of the park usable at any given time during the project — would work. There are also questions about the fate of the park’s Lower East Side Ecology Center building in the park and the upgrading of the sewer system bordering the park.

Instead of answering these serious questions about a project involving $2 billion of taxpayers’ money, Loeb said, the plan is being rushed through.

“We don’t understand why Corey Johnson is denying the councilmembers an oversight hearing,” he said. “And this denial to give an answer [to The Village Sun’s question] is very concerning.”

Amid the ongoing global pandemic, which is currently seeing another resurgence due to the latest variant, Delta, public parks and open spaces are needed for social distancing now more than ever. However, the E.S.C.R. construction work would put parts of East River Park — the largest park in the East Village and Lower East Side — off limits to the public for years, which would be a grievous mistake, opponents warn.