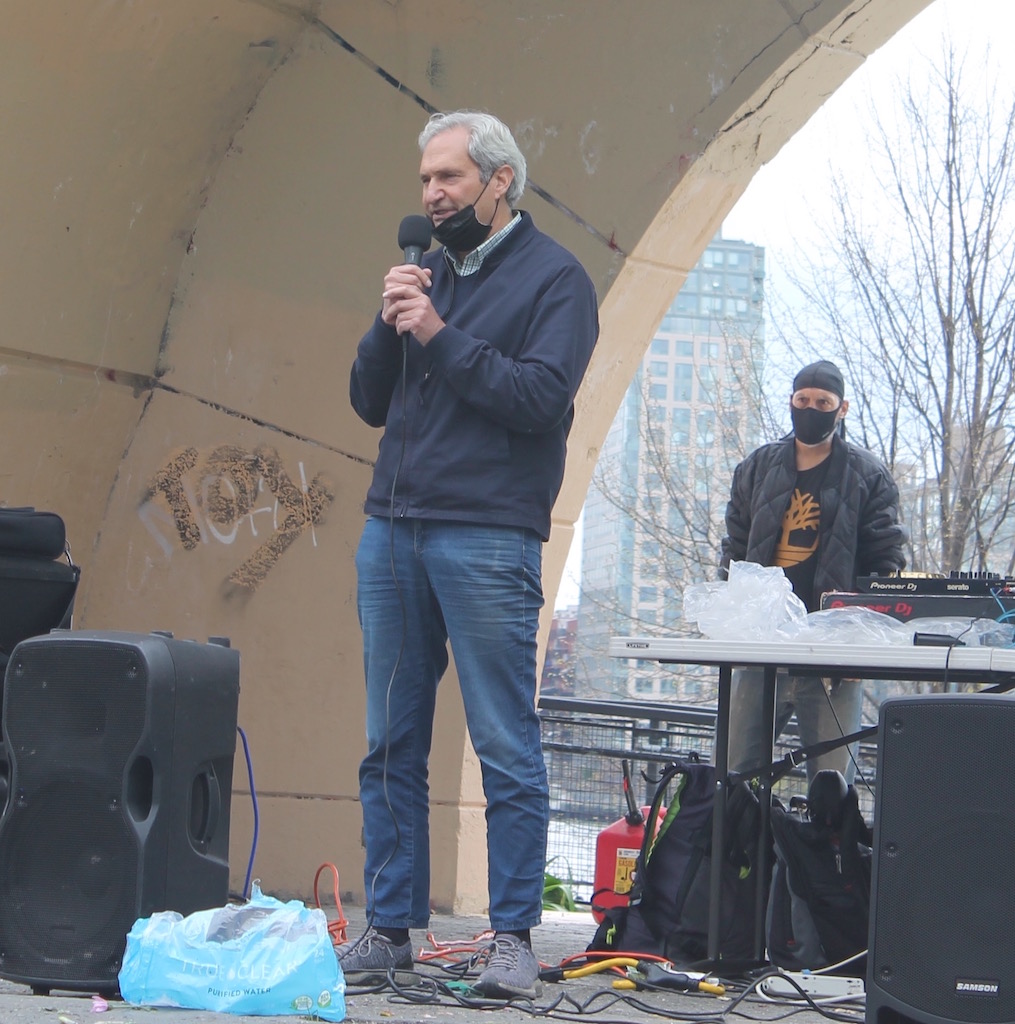 Attorney Jack Lester, speaking at the rally for East River Park in April, filed a FOIL request to learn the full extent of Comptroller Stringer's concerns about the E.S.C.R. project. (Photo by The Village Sun)

BY LINCOLN ANDERSON | East River Park activists rejoiced at the end of last month when Comptroller Scott Stringer refused to sign off on a contract for a $1.3 billion megaproject to turn their beloved park into a massive anti-flood levee.

Stringer sent the contract for the work — which would bury East River Park under tons of landfill and then raise it up to 10 feet — back to the city’s Department of Design and Construction “to address the outstanding issues.”

Mayor de Blasio, though, promptly overrode Stringer’s concerns about the contract — including the fact that it calls for only about half of the city’s stated 30 percent hiring goal for minority- and women-owned businesses — and the contract was registered.

But dogged opponents of the East Side Coastal Resiliency are not stopping there. On Aug. 12, one of their attorneys, Jack Lester, filed a Freedom of Information Law, or FOIL, request with the Comptroller’s Office, asking for all documentation relating to Stringer’s “analysis, review, findings and determinations pertaining to the E.S.C.R. project contract…with the…Department of Design and Construction.”

“[My] clients seek any and all documents, notes, memorandum, advisories and all other written, audio or video material maintained by the comptroller relating to the contract,” Lester wrote in the FOIL letter.

“Time is of the essence in this matter,” he added. “If some of the requested records are more readily available than others, we would appreciate you making those records available at the earliest opportunity.

“Please also advise us of any destruction of records with the date of and authority for such destruction,” Lester wrote.

Stringer’s office reportedly has said they will respond by Aug. 31.

Stringer, as the city’s chief financial officer and auditor, reviews all city contracts. He has 30 days to either register (approve) a contract, return it or object to its registration. However, even if the comptroller returns a contract to a city agency with questions about it, the agency does not have to resubmit the contact to his office, and — once the 30-day period expires — the contract is deemed “registered by operation of law.”

The city reportedly could start chainsawing down trees in the 46-acre waterfront park, between E. 13th and Montgomery Sts., as soon as September or October. All of the roughly 1,000 trees in the 82-year-old greensward, along with the rest of its flora, would be clear-cut for the megaproject.

Opponents warn that the huge undertaking could drag on much longer than scheduled and close off parts of the park for years. In the 2000s, a project to repair the park’s crumbling esplanade took a decade. Plus, they say, it would then take decades more for the elevated park’s shade canopy to be reestablished as newly planted saplings grow to mature height.

And, the project foes add, all of this would be happening during the COVID pandemic — which is now its fourth wave, with the Delta variant — when the East Village and Lower East Side’s largest park is needed more than ever for open space, social distancing and physical and mental health.

Instead, the advocates back an earlier and simpler version of the E.S.C.R. plan, under which a berm would be built next to the F.D.R. Drive — without destroying the entire existing park — to provide flood protection for the surrounding neighborhoods.