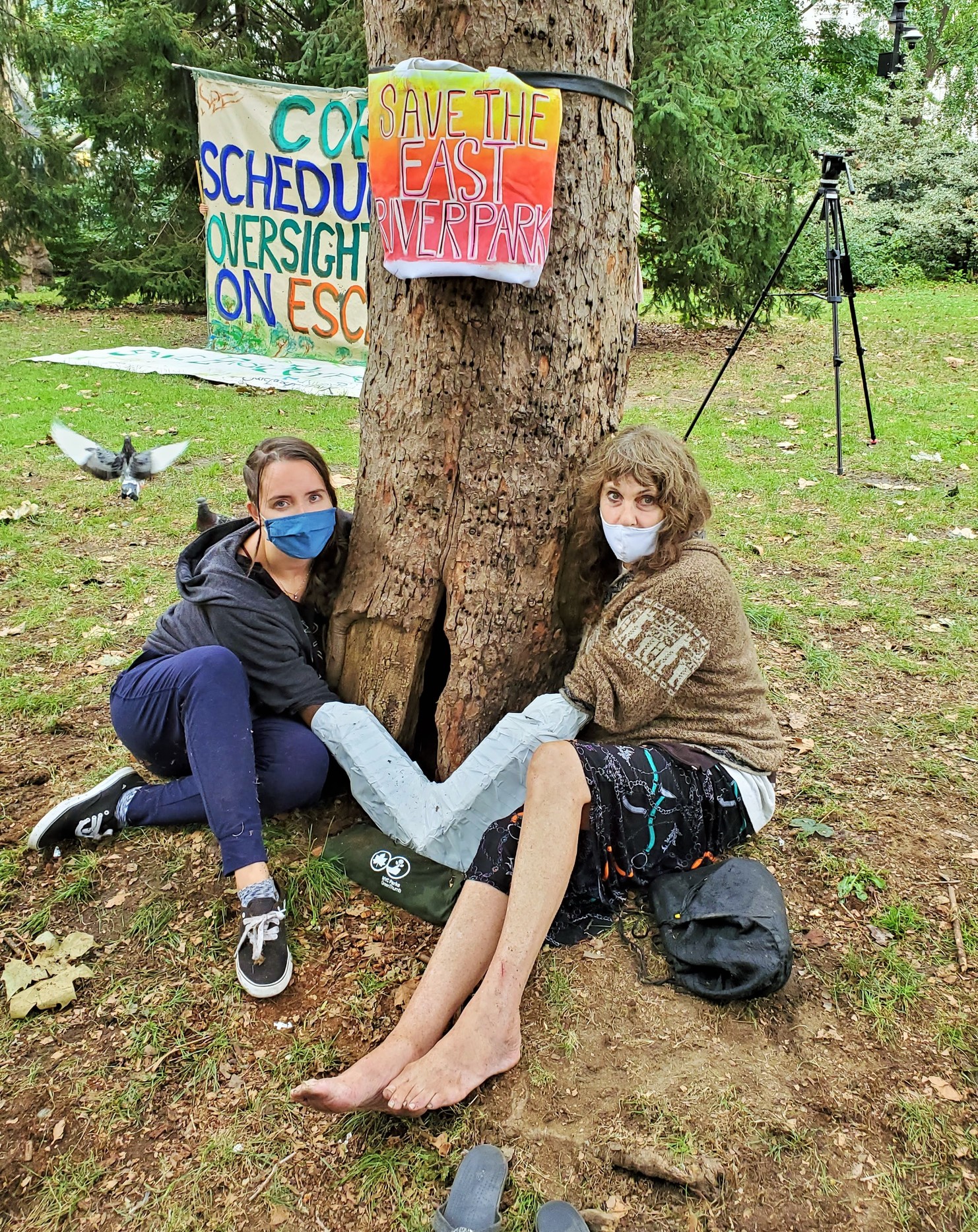 JK Canepa, right, and jmac are not going anywhere until they hear from Speaker Corey Johnson. (Photo by The Village Sun)

BY LINCOLN ANDERSON | Taking a page from old-school East Village activism, Tuesday morning two women locked themselves to a tree in City Hall Park. Along with a group of fellow protesters, they urged that the City Council hold an emergency hearing on the fate of East River Park.

The de Blasio administration is poised to move ahead with the destruction of the current East River Park — and its 1,000 trees — in order to raise the park by 8 feet to 10 feet to turn it into a massive levee to protect against coastal flooding. But opponents of the $1.3 billion East Side Coastal Resiliency megaproject support a far more low-impact plan that would simply build berms alongside the F.D.R. Drive to protect the surrounding community from floods without having to elevate the entire park.

JK Canepa and a woman who goes by jmac were joined by the hands in a locked embrace around the tree. They sat near a path just west of Tweed Courthouse, an infamous symbol of New York City government corruption.

Canepa is a veteran of a past lockdown trying to save a green space. In 2000 she shackled herself inside a “coqui” (frog) structure inside Esperanza Garden, at Seventh Street and Avenue C, in an effort to stop the garden’s demolition for a housing development.

“Sometimes you just have to put your body on the line,” Canepa declared on Tuesday. “When everything else fails, this is what you do.”

Councilmembers heading two key committees, Justin Brannan, who chairs the Committee on Resiliency, and James Gennaro, who chairs the Waterfronts and the Committee on Environmental Protection, have asked Council Speaker Corey Johnson to hold the emergency hearing. But, so far, the term-limited Johnson has not given his consent, remaining silent on the issue.

“Corey, do your job!” the protesters chanted.

Around 1 p.m., the protesters said no one from the Speaker’s Office had contacted them yet — but that a representative from the Mayor’s Office told them Johnson was “out of town.”

However, Juan Soto, a spokesperson for Johnson, told The Village Sun that was incorrect.

Johnson last week come under fire from the New York Post, which charged that the City Council, under Johnson’s leadership, “posted its least productive summer in two decades.”

The Post wrote that Johnson has frequently been in Provincetown on Cape Cod this summer while the Council only held 61 meetings, the fewest since the summer of 2003, when the Council met 57 times.

“We want to save 1,000 mature trees,” said one of the upright protesters, who declined to give her name. “The park is a sponge for flooding. Without the trees to protect us from the heat, people will lose their lives. It would take a minimum of 100 years for the trees to come back.”

“The resiliency plan has not been reevaluated since since COVID or [Hurricane] Ida,” said activist and poet Eileen Myles, a member of East River Park ACTION.

Canepa and jmac said members of the Police Department — from Community Affairs, Legal and TARU (Technical Assistance Response Unit) — and the Mayor’s Office have come by and asked them if they were O.K. and if they were “uncomfortable,” saying they should reach out if they need assistance.

They said they are in for the long haul and not ending the lockdown until they get some word from Johnson.

In the meantime, Aresh Javadi, who helped organize the protest, will supply them with food, they said.

As for exactly how they are locked together, Canepa said the mechanism is hard to describe.

Allie Ryan, who is running for City Council in District 2 against the incumbent, Carlina Rivera, was also at the protest. She said the top issue in the campaign is East River Park.

“It’s an easy place to go for a long run that wraps around the lower part of the island,” she said of the waterfront park. “For me, it’s a safe place to bike with my children. And the Avenue C bike lane is no substitute.”

Ryan said the city is “skipping blocks” in the Avenue C bike lane’s construction, which started in July and is still not finished. And she noted that while Esperanto restaurant closed at Ninth Street and Avenue C a month ago, its two outdoor dining sheds still clutter the avenue.

Johnson spokesperson Soto said he would get back to The Village Sun with a response on whether the Council speaker would agree to hold an emergency hearing on East River Park.

Correction: The original version of this article incorrectly said JK Canepa had been part of the lockdown effort to keep police from evicting CHARAS/El Bohio from the old P.S. 64 in 2001.