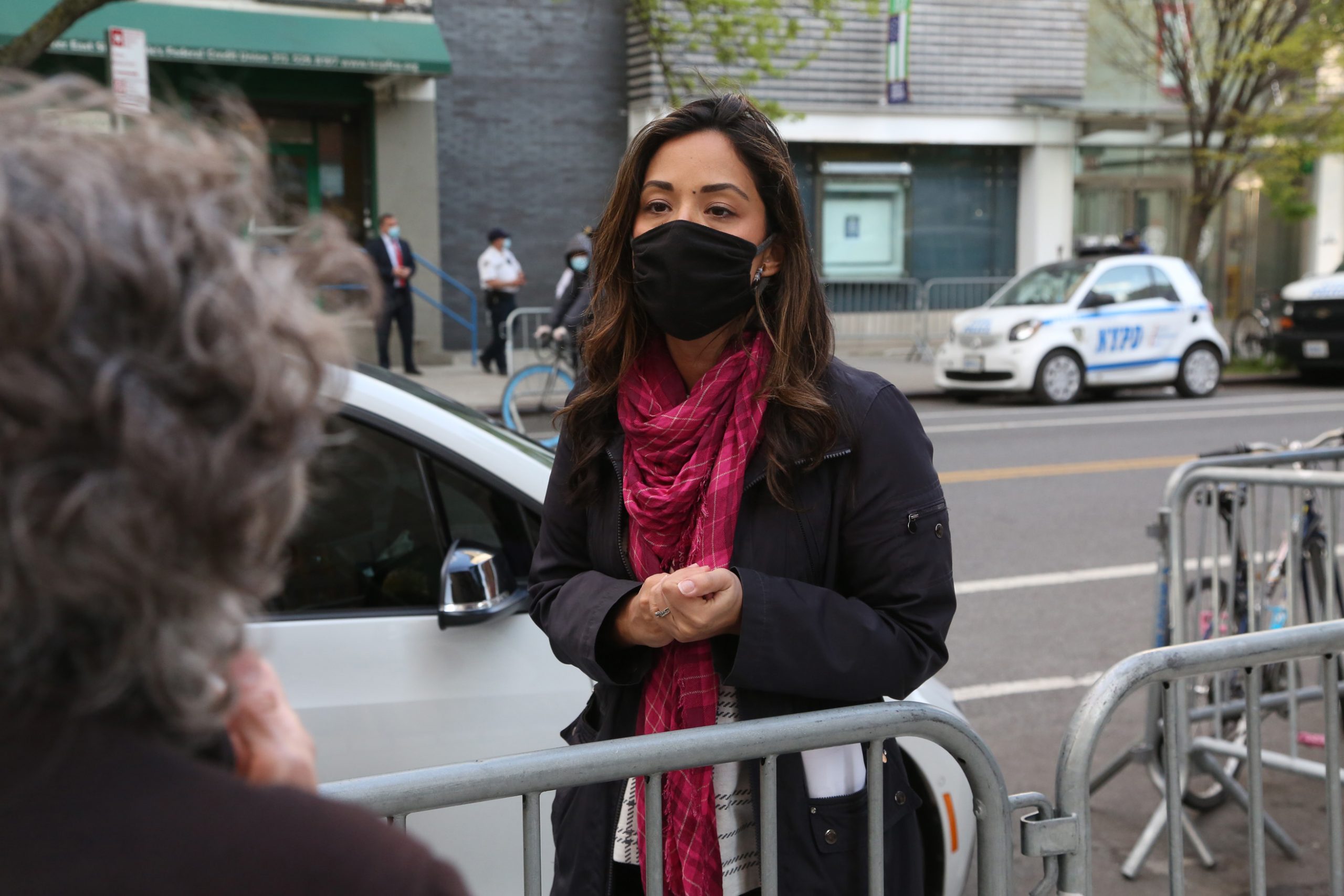 City Councilmember Carlina Rivera at a Black Lives Matter protest outside the East Village's Ninth Precinct in May. The protesters were decrying a rough arrest on Avenue D by a police officer while he was doing social-distancing enforcement. (Photo by © Jefferson Siegel)

Carlina Rivera votes no on budget; Says mayor ‘would not work with us’

Although the historic New York City budget that passed Tuesday slashed $1 billion from the New York Police Department, the East Village councilmember — a leading voice for police reform — voted no on the entire budget.

Sixteen other councilmembers joined her in giving a thumbs down on the budget — though some did so because they oppose the whole “Defund the Police” effort.

“My budget vote was always going to be guided by whether we were investing sufficient dollars from the NYPD into BIPOC communities,” Rivera tweeted on June 30. (BIPOC is an acronym for Black, Indigenous and People of Color).

My budget vote was always going to be guided by whether we were investing sufficient dollars from the NYPD into BIPOC communities.@NYCMayor would not work w/ us to make these needed investments, which is why I can not support this year’s budget. My remarks from today’s vote ????. pic.twitter.com/RFGKfRnKKi

In her remarks before the vote, Rivera said, in part, “While this budget will result in some officers in schools and homeless outreach being moved out of N.Y.P.D., the Mayor would not accept the removal of police from other roles or even seriously address the failure of the N.Y.P.D. to dismiss officers who have committed clear acts of misconduct or abuse and remain on the force.”

Although Council Speaker Corey Johnson said he wanted deeper cuts to the Police Department, he still voted yes on the budget.

More than half of the Police Department budget cuts were accounted for by shifting some of the force’s personnel — like school safety officers and homeless outreach officers — to other agencies. The other half of the $1 billion in cuts will be reallocated to youth programs headed up by other agencies, like the New York City Housing Authority and the Parks Department, as well as the Summer Youth Program.

Comptroller Scott Stringer, meanwhile, slammed the police cuts as a “bait and switch.”

“The ‘$1 billion cut’ to the N.Y.P.D. proposed by the Mayor and the City Council is not a $1 billion cut — it’s a bait and switch and a paper-thin excuse for reform,” Stringer said, in a statement. “That is especially true of proposals to slash uniformed police overtime by 60 percent with no plan on how to get there. And the same is true of the gimmicks in this proposal that only reshuffles the deck and folds our opportunity to bring change. Meaningful change in this moment won’t come by shifting police from one agency to another, and budget tricks won’t bring an end to the status quo. The movement in the streets won’t be suppressed by manipulated math.”

For her part, Donna Lieberman, executive director of the New York Civil Liberties Union, also called the cuts a ruse.

Writing in an op-ed in the Daily News, she said, “The budget ‘cuts’ are largely pretense, designed to feign action without making any meaningful changes to reduce police violence and the excessive intrusion of police and police tactics into the lives of black and brown New Yorkers.

“A big chunk of the $1 billion in ‘cuts’ comes from an accounting trick: moving school safety officers, who are currently part of the N.Y.P.D., to the Department of Education. This is in no way a reallocation of resources. The D.O.E. will not reclaim those funds for teaching and learning.”

Rivera, however, said this was just the beginning. At the end of her comments to the City Council before the budget vote, she declared that a “much longer and larger fight” still lies ahead.

“Now we must look to the future,” she said. “When I first spoke to advocates about their call for cutting the NYPD budget by $1 billion and reinvesting those funds in our communities, we all knew that this fight — whatever the outcome — would only be the first step in a much longer and larger fight to radically change the way we think about public safety.”

Of those councilmembers who voted against the budget, nine did so because they felt the police cuts did not go far enough, while eight thought they went to far. Those in the former category included Rivera, plus Inez Barron, Ben Kallos, Brad Lander, Carlos Menchaca, Antonio Reynoso, Donovan Richards, Helen Rosenthal and Jimmy Van Bramer. Those who thought the police cuts were too much included Joseph Borelli, Ruben Diaz Sr., Chaim Deutsch, Mark Gjonaj, Robert Holden, Steven Matteo, Eric Ulrich and Kalman Yeger.