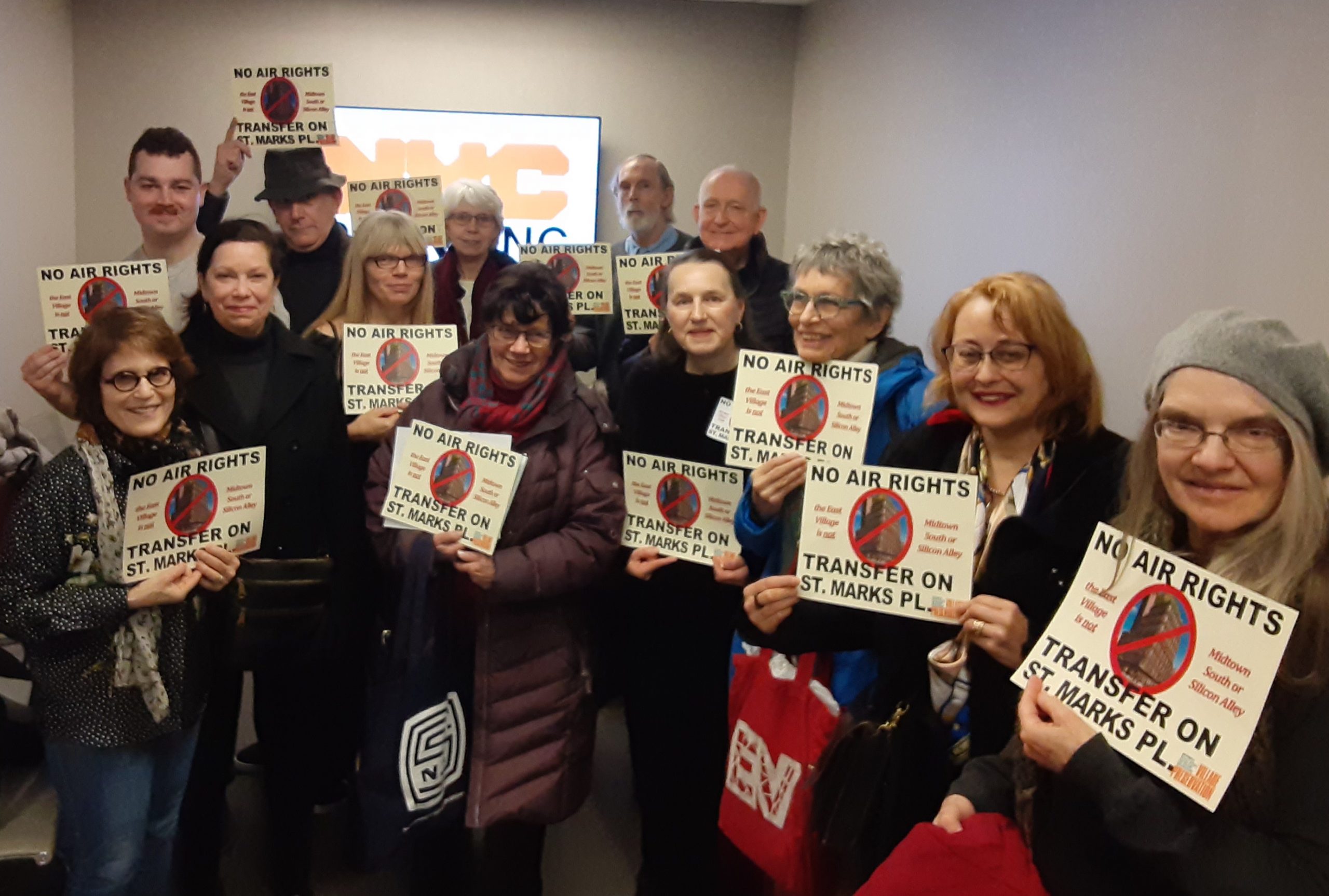 Community members turned out at Wednesday's City Planning Commission hearing to show their opposition to the special-permit application for a commercial tower at 3 St. Mark's Place. (Courtesy Village Preservation)

BY LINCOLN ANDERSON | Local politicians showed a united front against a plan for an oversized office tower at the gateway of the East Village at a City Planning Commission hearing Wednesday morning.

City Councilmember Carlina Rivera holds the key vote on whether the project — at the northeast corner of St. Mark’s Place and Third Ave. — obtains a needed special permit. Until Wednesday, however, she had not stated her position publicly.

But at the hearing, a Rivera staffer read a joint letter by the councilmember, co-signed by Assemblymember Deborah Glick and state Senator Brad Hoylman, urging City Planning to deny the application.

Using the development rights a.k.a. air rights would allow construction of a building 20 percent larger than normally allowed there. The developers want to build 10 stories tall.

“This development would clearly be out of context with the landmarked 4 St. Mark’s Place, as well as the surrounding streetscape and character, and we urge the City Planning Commission to deny this application,” the three politicians wrote.

“Located at the ‘Gateway to the East Village’ — this proposed development at 3 St. Mark’s Place would seriously impact and conflict with the landmarked Hamilton-Holly House, and the proposed non-complying bulk would be out of context with the historic St. Mark’s Place corridor, as a whole.

“The developers’ proposed repairs and perpetual maintenance fund for 4 St. Mark’s Place — where Elizabeth Schuyler Hamilton, the widow of Founding Father Alexander Hamilton, once resided — are not sufficient and do not measure up against the incongruity this proposed building would create,” the pols said, adding, “We do not believe that, in this case, the disadvantages to the surrounding area will be offset by the advantages of the landmark’s preservation.”

The development site — which has been cleared — was formerly home to a corner cigar-and-magazines store, a Korilla Korean sandwich shop, a McDonald’s and Trigger’s Continental cheap-shots bar.

Under the plan, in return for modest additional restoration work at 4 St. Mark’s Place, the F.A.R. (floor-area ratio) of 3 St. Mark’s Place would be boosted from 6 to 7.2, meaning the building would have more floor space, increasing its overall bulk. The proposed improvements to the Hamilton-Holly House would include a restored facade, a new front door and stoop masonry repairs.

This maneuver is specific for air-rights transfers from individual landmarks, such as 4 St. Mark’s. Basically, the air rights can only be transferred across the street — which normally can’t be done — if, as part of the deal, some of the profit from the air-rights sale goes toward restoring the landmark. In this case, 5 percent of the profit would.

Only in a few other rare cases — such as involving special districts — can air rights can be transferred across a street.

The application is currently going through the city’s Uniform Land Use Review Procedure, or ULURP. As part of that process, Community Board 3 has already weighed in on the project — unanimously urging rejection of the special permit.

In her recommendation on the ULURP, Brewer stated, “One of the findings that must be met to obtain this special permit includes:

“That the permitted transfer of floor area…will not unduly increase the bulk of any development or enlargement, density of population or intensity of use in any block to the detriment of the occupants of buildings on the block or nearby blocks, and that any disadvantages to the surrounding area caused by reduced access [to] light and air will be more than offset by the advantages of the landmark’s preservation to the local community and the City as a whole;

“We do not think the Proposed Development meets this finding due to its increase in bulk. In comparison to prior uses on the site, the intensity of use will increase significantly, particularly during peak hours of the day due to its planned office use.

“There have been long-standing community concerns around development pressures resulting in taller, bulkier buildings in this area and this project is yet another example.,” Brewer added. “St. Mark’s Place largely consists of 4- and 5-story buildings and has tremendous cultural significance to the area that is being lost due to development and changes of use.”

The recommendations of both C.B. 3 and Brewer are advisory only. However, the votes by City Planning and the City Council are binding.

The Planning commissioners did not vote on the application Wednesday, but will at a later date, after which the issue will move on to the City Council for its vote.

Village Preservation (formerly Greenwich Village Society for Historic Preservation) has been leading the effort against the special permit.

“The potential benefits to this individual landmark and the neighborhood are simply not worth the trade-off of the air-rights transfer,” he read. “Most of the restoration of 4 St. Mark’s Place, which was approved by the Landmarks Preservation Commission in 2016, has already been executed… . The applicant is simply seeking to get after-the-fact credit and financial benefit for work already done and paid for, and extra square footage for additional work which is not needed and certainly does not justify the air rights transfer.”

Bubbins said it’s not necessary to restore 4 St. Mark’s to its exact 19th-century look — and, in fact, it would be better not to do it.

“[P]art of the beauty and significance of the landmarked house, which our organization proposed for landmark designation in 2002,” he said, “are the changes it has undergone over time. To simply erase all those changes as a means to gain approval for the air rights transfer is unnecessary and wrong.

“The nearby Merchants House Museum is a perfectly preserved slice of New York from 200 years ago,” he continued. “That is not what this house, which is not open to the public, should be or needs to be. Erasing almost 200 years of history to create a facsimile of what the building looked like when built in the early 19th century is neither desirable nor would it justify the air-rights transfer, whose real purpose is to simply increase the size of the office tower. The Special Permit is not necessary to fund needed or even necessarily desirable restoration work.”

Several community members also spoke out against the special permit.

Susi Schropp, a St. Mark’s resident for 30 years, noted the developers had already demolished a 200-year-old building that had residential apartments.

She said the office-tower project would just help turn the area “into another cold business district,” while the 20 percent height bonus from the air-rights transfer “is an insult to injury.”

Jacob Ford, who lives on St. Mark’s right next to the site, said, “Whether it’s for SantaCon or N.Y.U. students or tourists, it’s very important that the ‘gateway’ [to the East Village] is contextual.”

However, despite the opposition from local politicians, Village Preservation and neighbors, it’s still expected that City Planning will O.K. the special permit, meaning the City Council ultimately will be the decider. Usually, the other councilmembers defer to the local councilmember — in this case, Rivera — whose district contains the given project.

After the hearing, Andrew Berman, executive director of Village Preservation, praised Rivera’s stance, though added she will still have to play a key role when the ULURP reaches the City Council for a vote.

“We are very glad that Councilmember Rivera has come out in opposition to the proposed air rights transfer for 3 St. Mark’s Place,” he said. “Given that there is a great likelihood that the City Planning Commission will approve the transfer, it will likely ultimately come down to the City Council, where the body will follow the lead of the local councilmember, in this case Rivera. We are hopeful that her statement today will be followed by a ‘no’ vote in the Council and a call to her colleagues to do the same.

“We have said from the beginning that this proposal to increase the size of the planned tech office tower at the ‘gateway to the East Village’ is wrong, and would only serve to accelerate the spread of ‘Midtown South’ and Silicon Alley to this neighborhood,” Berman added. “Hundreds of neighbors have joined the community board and other local elected officials in sending letters and attending hearings to express opposition to this plan. With Councilmember Rivera’s stated opposition today, we are optimistic that the air-rights transfer can and will be defeated.”