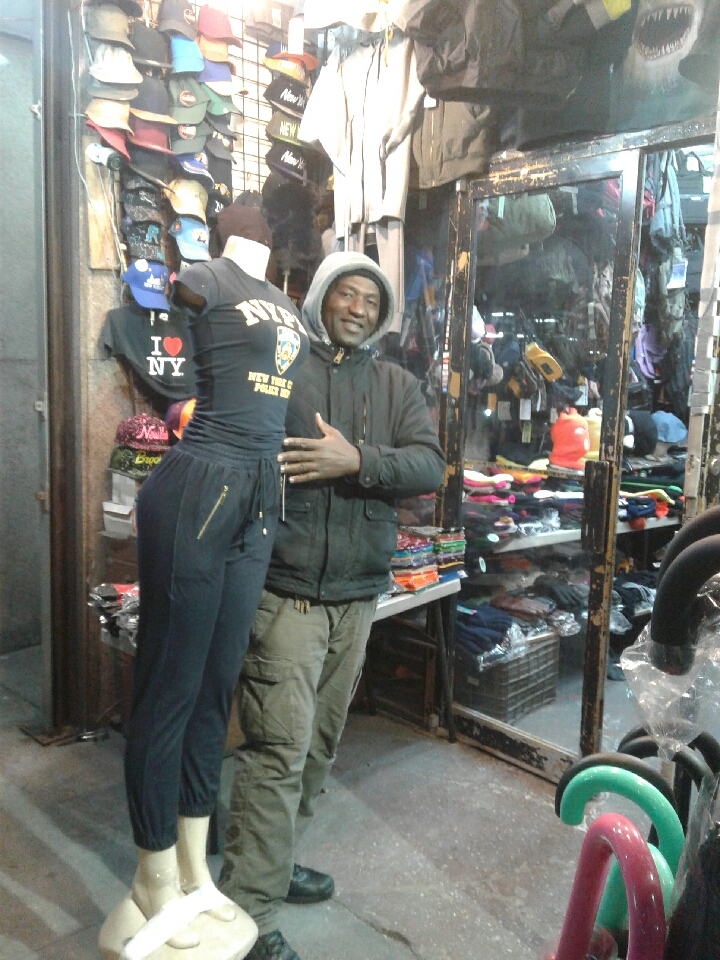 Busway is a bust for stores along 14th St.: Merchants

BY LINCOLN ANDERSON | The new busway is running roughshod over stores along 14th St., according to local shop owners and managers.

The Village Sun surveyed stores along the crosstown boulevard between Third and Seventh Aves. the day after New Year’s between 6 p.m. and 8:15 p.m. Many merchants interviewed said the busway has been a bust for their businesses, with sales in their stores down 20 to 25 percent or even more.

The busway, which launched Oct. 3, bans cars from using 14th St. between Third and Ninth Aves. as a through street daily between 6 a.m. and 10 p.m., prioritizing buses, trucks and emergency vehicles. It’s being billed as an 18-month pilot project.

One of the few exceptions to the retail downturn, though, is apparently Trader Joe’s. The supermarket hasn’t seen any noticeable dip in business, according to store worker Mathew, 23, an aspiring dancer, who was putting green apples out for sale on the shelves near the front door.

“The only time it’s been a problem is if people need a cab — older folks, for the most part,” he said. “Mainly, we walk them with their things to Third [Ave.] and then hang out there [until a cab comes].”

Cabs can drop off on 14th St. but then must take the first right turn. They can’t cruise along the street for fares, though.

It was a frenetic scene as the place was teeming with shoppers.

“We are the busiest [Trader Joe’s] store in the country,” Mathew said, proudly.

But other merchants — many of them smaller, nonchain stores — said they are definitely feeling the crunch from the busway.

At the Garden of Eden Marketplace, between Union Square West and Fifth Ave., a manager said she has noticed a perceptible drop-off in customers.

“Yes, yes, right away,” said Nargis Khatun, noting, “People who have a car buy a lot of stuff.”

She said the sooner the busway pilot project is over, the better, as far as the store is concerned.

“I hope something will change — I hope,” she said, meaning she hopes cars will be allowed back on 14th St. again.

Brandon Julez, 22, who works at Guitar Center, said that a recent crackdown on curbside car parking and standing that has come with the busway is making his job much more stressful. He is stationed right inside the front door.

“It’s basically like a ticking time bomb,” he said, “because customers have seconds… . We do, like, a lot of pick-up orders. They have to run in here, show me the order, pick up the order and run out to their car. They are buying a guitar, a drum set or even a piano. It’s like a race against time. There are some [cars] where they get ticketed.”

He has personally experienced the hassle of trying to get new equipment from the store to his home. He plays in a hard rock band, Band of Julez, with his brother, and recently bought an amp at Guitar Center.

“Even my order, I was picking up an 8-by-10 bass cabinet — like [the size of] two Marshall stacks,” he explained. “I had to lug it to the avenue with tape handles. It wasn’t pretty. Before, one of my parents would have come with a car and stopped right outside and got it.”

As he spoke, a woman was picking up a sound-mixer for her church. Her brother was standing in a car right outside, waiting. They weren’t ticketed, but they didn’t take too long, either.

Logan Middleton, 24, who also works at the store, said he used to live on 14th St. and that parking enforcement formerly was “semi-relaxed,” but that it got much stricter after this Christmas.

Outside, 14th St. between Fifth and Sixth Aves. — as in the roadway itself — was quiet and often totally empty for stretches of time. During a span of about 10 minutes, the number of electric kick scooters passing by almost equaled the number of articulated S.B.S. buses: There were 14 cars, 11 bikes (including at least four electric delivery bikes), four M.T.A. buses, three electric kick-style scooters, three yellow cabs, one van and one large tour bus. At one point, an electric scooter rider gracefully slowly slalomed down the empty street.

Beatrice has been with the company — which bought Sleepy’s a few years ago — for 14 years.

“This was one of the better stores,” she said. “They used to kill to get in [to work] in this store.”

Now, she said with a laugh, she might want to transfer to another location.

Though the 14th St. outlet only has mattress samples and the company’s deliveries are made from Long Island, the parking restrictions have reduced the number of shoppers, she said.

“Definitely,” she said. “People are complaining. The people that are down here can’t park here.”

She said recently someone was picking up tickets inside the store while his or her companion — who could not drive — was waiting in a car outside and was being pressured by police over being there.

“The busway is very confusing,” Gonzalez said. “Before you could park briefly. I have had customers with luggage who couldn’t get picked up.”

She estimated her business is down by 25 to 30 percent since Oct. 3.

Like Trader Joe’s, the Levi’s store, another national brand, apparently is not being hurt by the busway. A group of young salesmen there said the store benefits from “tourism” and from good foot traffic because it’s located between Union Square to the east and the Apple and Samsung stores to the west.

But Party City, a party-supplies superstore, is feeling deflated by the new Transit and Truck Priority plan.

As for how much business has dropped off since the busway’s start, he said, “I would say, a lot — 20 percent, maybe even more.”

The parking enforcement is a big issue, he noted.

“They will tow your car without thinking,” he said. “There was a guy on New Year’s Eve. He came in to get balloons. They were already backing the [tow] truck up.”

According to Altus, who has worked at the store for 15 years, car drivers used to be able to park in front of the store at metered parking, but now parking is only allowed for commercial vehicles.

He said his understanding is that Party City is now looking to relocate the store to another location — “far away” from 14th St.

Sunil Kumar, 41, a manager at Cigarville, said the busway has, without a doubt, snuffed out a  good share of their business. The shop sells tobacco products and accessories.

“Oh yes, sir, big time,” he said, when asked if there’s been a negative impact from the new initiative. “Before, there used to be metered parking. We used to have 15 to 20 customers per day who would park their car outside, buy their stuff and leave. I’m not seeing those faces.”

Like others, Kumar cited the tough new enforcement by police traffic agents on parking violations.

“People are not used to that,” he said. “They are afraid of getting tickets. And tickets are more expensive than buying stuff.”

Asked if he hoped the busway ends, he enthusiastically said, “I hope so.”

As opposed to the national brands Trader Joe’s and Levi’s, which aren’t seeing the negative effects, he said, “We are all small businesses.”

CBS 2 reported that the lack of curbside parking is devastating the business of Jason & Co. jewelry store on 14th St., whose owner said their sales are off 40 percent since the busway’s start.

Kumar claimed even the Wine and Spirits store across the street is suffering. But a manager there disagreed, saying they mainly get business from people within walking distance. In fact, he said, the busway may even have helped a bit by removing the Fifth Ave. bus stop on 14th St., which somehow is driving more customers to them.

Fred Diab, 53, the owner of E & L Sportswear, just west of Sixth Ave., is very upset over the busway. He was taking in his merchandise from the sidewalk around 8 p.m. with the help of worker Ibrhim Konate.

“We get some customers — two, three times a week — saying, ‘I had to park four blocks away,’” Diab said.

Diab is utterly flabbergasted at the empty street outside his storefront due to the car ban.

“I did call 311 to complain about this,” Diab said. “She transferred me to someone. Nobody called back. Nobody cares.”

The merchant doesn’t know what to do, maybe start a petition against the busway, he’s not sure.

“Last week, I complained to my landlord,” he related. “He said, ‘They don’t listen to me. They listen to you.’”

Back at Mattress Firm, Beatrice was still sitting in her store, which was still empty. She readily agreed that the congestion on 14th St. used to be awful.

“The traffic was horrendous,” she said. “These are city streets — it looked like [traffic on] a bridge.”

But she suggested that maybe there is room for a compromise on the busway.

“I think they should just do it in the morning and evening,” she said, “and then let the traffic come. And let people buy a mattress or whatever.”