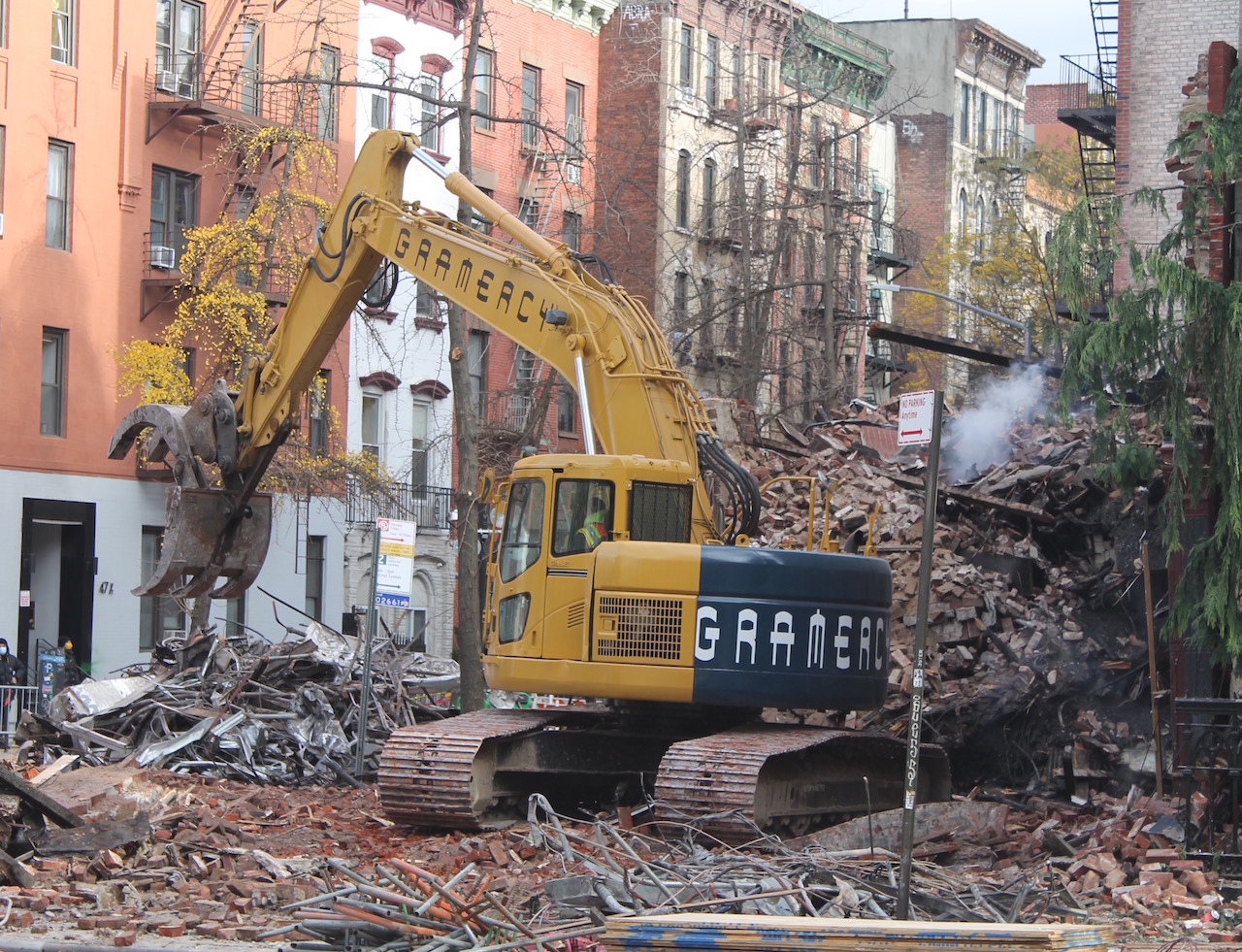 An excavator vehicle demolishing the remnants of 116 Second Ave. on Monday afternoon. (Photo by The Village Sun)

BY THE VILLAGE SUN | Updated Thurs., Dec. 10, 9:40 p.m.: The building where Saturday morning’s disastrous Second Ave. fire broke out had been razed down to a pile of rubble by Monday. The structure had been damaged beyond repair by the raging blaze.

The property had eight residential units and two commercial spaces. Four apartments were rent-regulated while the rest had market-rate rent.

According to Property Shark, the current owner purchased the building in November 2000. The sale price was not posted.

The building’s total income in 2020 was listed as $892,778 against $295,843 in expenses. However, that figure may also include revenue from the adjacent building to the east, 48 1/2 E. Seventh St., which is on the same lot. That last building, which contains a Van Leeuwen Artisan Ice Cream store on its ground floor, apparently was not damaged by the fire and was not demolished.

The tenement was a New York City landmark, as part of the East Village/Lower East Side Historic district, as is the venerable Middle Collegiate Church, which was gutted and saw its roof collapse in the six-alarm fire.

No. 116 Second Ave. also was previously hit by a fire back in February of this year, though that blaze fortunately did not spread to the adjacent historic Dutch Reform church or other buildings.

The building’s commercial tenants included Cafe Mocha and Via Della Pace restaurant. However, both were damaged and closed by the earlier fire.

According to the city’s Department of Buildings, 116 Second Ave. did have several open violations related to construction work for repairs stemming from that earlier fire. However, generally speaking, the building was not riddled with open violations.

Last year, three violations were issued for problems with scaffolding around the structure — including scaffolding not protecting all of the sidewalk — but the owner addressed them.

The property has a residential F.A.R. (floor area ratio) of 4, meaning that the maximum square footage a building there can have is equal to four times the size of the lot’s footprint. The razed building was actually overbuilt by a few thousand few under current zoning.