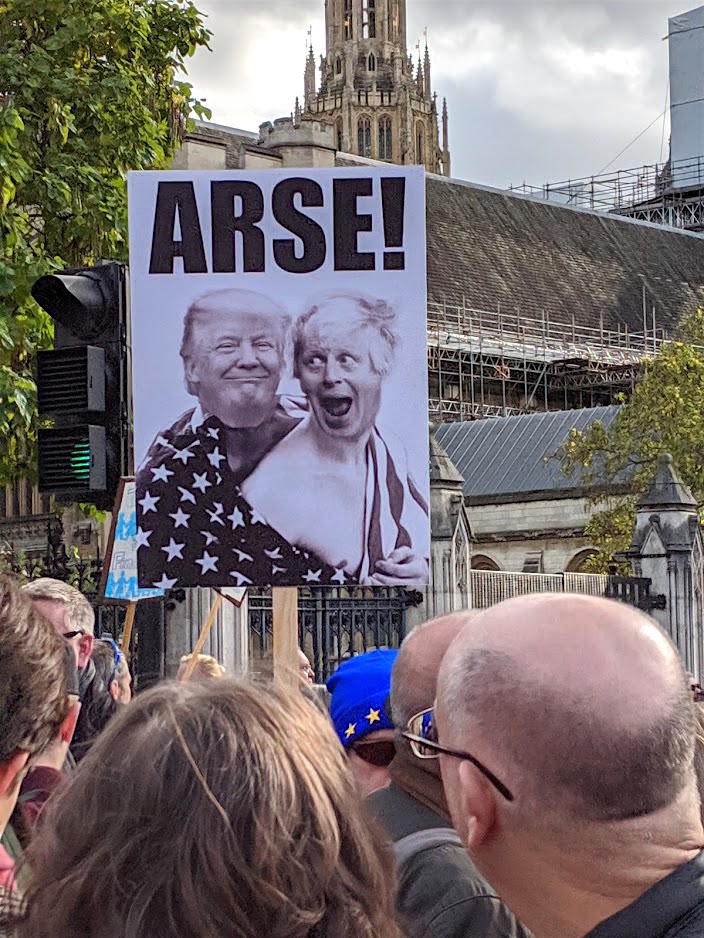 Boris Johnson depicted as Donald Trump's main squeeze at an anti-Brexit rally in London in October 2019. (Photo by Liz Thomson)

BY LIZ THOMSON | On the morning after D.C.’s long day’s journey into night, a cousin texted me: “You sure about wanting a trip to America?” She grew up in Liverpool, from which iconic waterfront a young John Lennon looked out and dreamed of New York. But it’s not a dream Sandy shares and, like many of my friends, she finds my obsession with the United States hard to comprehend.

I replied that I’d love to be there right now, to engage directly in frenzied discussion with my many friends, and to experience the passing of the torch to Joe Biden after four dark and dislocating years. It’s certainly true that a number of people I know had vowed never to visit America while Trump was in power. Visiting from Britain right now would be difficult — I’m not clear if it’s even possible, and I’ve always thought international travel should not have been permitted during our global health emergency.

But back to Sandy’s point…

Like everyone I know, I sat glued to the television on Jan. 6, from the early evening outbreak of the insurrection to (in my case) 4 the following morning. I switched between BBC and other news channels, in between checking CNN on my mobile, while exchanging WhatsApp calls and messages with distraught New Yorkers. Olga was in tears, as was I — upset for my friends’ agony, upset at what was happening to a country I love and which I always dreamed that one day I might call home.

I was in New York when Trump descended the golden staircase to proclaim his candidacy, which everyone assumed would be derailed almost immediately. How we all laughed… . And then the nightmare began, and just a few months after Britain had voted by a narrow simple majority for Brexit. The two events have always seemed to me inextricably linked: forced upon us by our growing underclass, who felt it might be their only chance for a slice of the pie, and by what Hillary Clinton — presciently, as it turned out — called “the deplorables,” in which category should be included the already-rich who foresaw an opportunity to get even richer.

What happened at the Capitol can’t truly be described as unbelievable because everyone I know, plus many perfectly sane commentators, predicted violence if Trump failed to win a second term. But I’m not sure many people envisaged a literal assault on the Capitol, carried out with such ease. In Britain, Whitehall and the Houses of Parliament long ago became fortresses. As a newbie journalist in 1984, an interview in Parliament required only that I give my name to a policeman at the door and then be met in the lobby.

After 9/11, though, endless ugly physical barriers went up, with visitors required to show ID, give up their mobiles, and pass through airport-style scanners. Police, generally in short supply in Britain thanks to cuts, are everywhere. So, to watch an attempted coup unfold with such ease was jaw-dropping. It’s clear there was collusion — a defining word of the Trump presidency.

In that sense, what happened in Washington couldn’t happen in London. But, my friends, please understand this: Britain suffered a coup — undertaken from within government. Boris Johnson’s first act on his first day as prime minister, July 24, 2019, was to sack 17 cabinet ministers — the biggest bloodbath in the history of British politics. Though none was exactly a left-wing radical, they were seen as an impediment to the Brexit project. They were replaced by a cabinet of nodding dogs, lacking both intellectually and morally, as the COVID crisis has made all too clear.

A month later, Johnson decided to prorogue Parliament, and Jacob Rees-Mogg — the posh right-wing populist, extreme Brexiter and Leader of the House — was dispatched to seek the queen’s assent. To the surprise of many, she gave it without demur, though the Supreme Court would later declare the move unlawful. (Rees-Mogg is a partner in a £5 billion investment fund that avoids U.K. tax and is a direct conflict of interest.)

However, before Parliament rose, 21 back-bench Conservative MPs — big beasts, some of whom had held major positions in Margaret Thatcher’s government — voted against Johnson’s government in an attempt to stop a catastrophic no-deal Brexit. All were expelled from the Conservative Party, meaning they would be blocked from standing in a future election, which, as it turned out, came in December.

Many simply resigned — all would be Lincoln Project-type figures. Some, like Dominic Grieve, a distinguished senior lawyer and a leading advocate of a second referendum on Brexit, stood as an Independent and lost. Grieve had previously been fired by Prime Minister David Cameron for daring to support the European Court of Human Rights.

Donald Trump severely tested the limits of the U.S. Constitution but ultimately it held. Britain’s constitution is merely an accepted system of rules that have never been codified into a single document. When Britain joined the European Union in 1973, Britain became bound by the constitution of the E.U. and its laws.

Brexit was all about “taking back control.” Britain’s Christmas Eve final exit from the E.U. has revealed what Professor Vernon Bogdanor sees as “the nakedness of Britain’s unprotected constitution… The attitude that Westminster knows best and that majorities can be entrusted with protecting the rights of minorities will come to seem increasingly threadbare.”

Since coming to power in 2010, the Conservatives have mounted an assault on the rights of all manner of people: the poor and disenfranchised; asylum seekers, whose skin tone and beliefs differ from our own; children of empire, whose families came in the 1950s and ’60s and whose right to live in Britain seemed never in doubt.

E.U. citizens who could live, love and work where they pleased for half a century now feel insecure: Theresa May, Johnson’s predecessor as prime minister, declared quite specifically, “If you believe you are a citizen of the world, you are a citizen of nowhere. You don’t understand what citizenship means.”

Britain too has made it harder for people to vote, harder to get legal aid, and has suggested abandoning trial by jury. Journalists are often denied freedom-of-information (FOI) requests — and “national security” has always been cited when anyone tries to uncover inconvenient truths. The truth of Watergate would never have come out in Britain. A recent Parliamentary report on Russian meddling in British affairs was quashed without inquiry. And as in the U.S., whites can demonstrate and riot with more impunity than blacks.

Johnson was banking on Trump’s return to the White House — they are peas in a pod, right down to their incompetent handling of COVID. So Biden’s victory is wonderful news not only for America but for Britain, and of course the world. He and Kamala Harris face an enormous challenge, not least the enemy within.

Britain faces four more years of moronic and corrupt Conservative administration, during which time the union of the four nations that comprise the U.K. will likely break apart. What we take from across the Atlantic is generally the bad stuff. But when the moment comes for a government reset, let’s hope we can take something good:

“We the People of the United Kingdom, in Order to form a more perfect Union, establish Justice, ensure domestic Tranquility, provide for the common defence, promote the general Welfare, and secure the Blessings of Liberty to ourselves and our Posterity, do ordain and establish this Constitution for the United Kingdom.”

Thomson is a London-based journalist and author and the founder of The Village Trip festival of Greenwich Village. Her latest book is the biography “Joan Baez: The Last Leaf” (Palazzo Editions). For a video of Thomson talking about her lifelong interest in Baez and her music, click here.