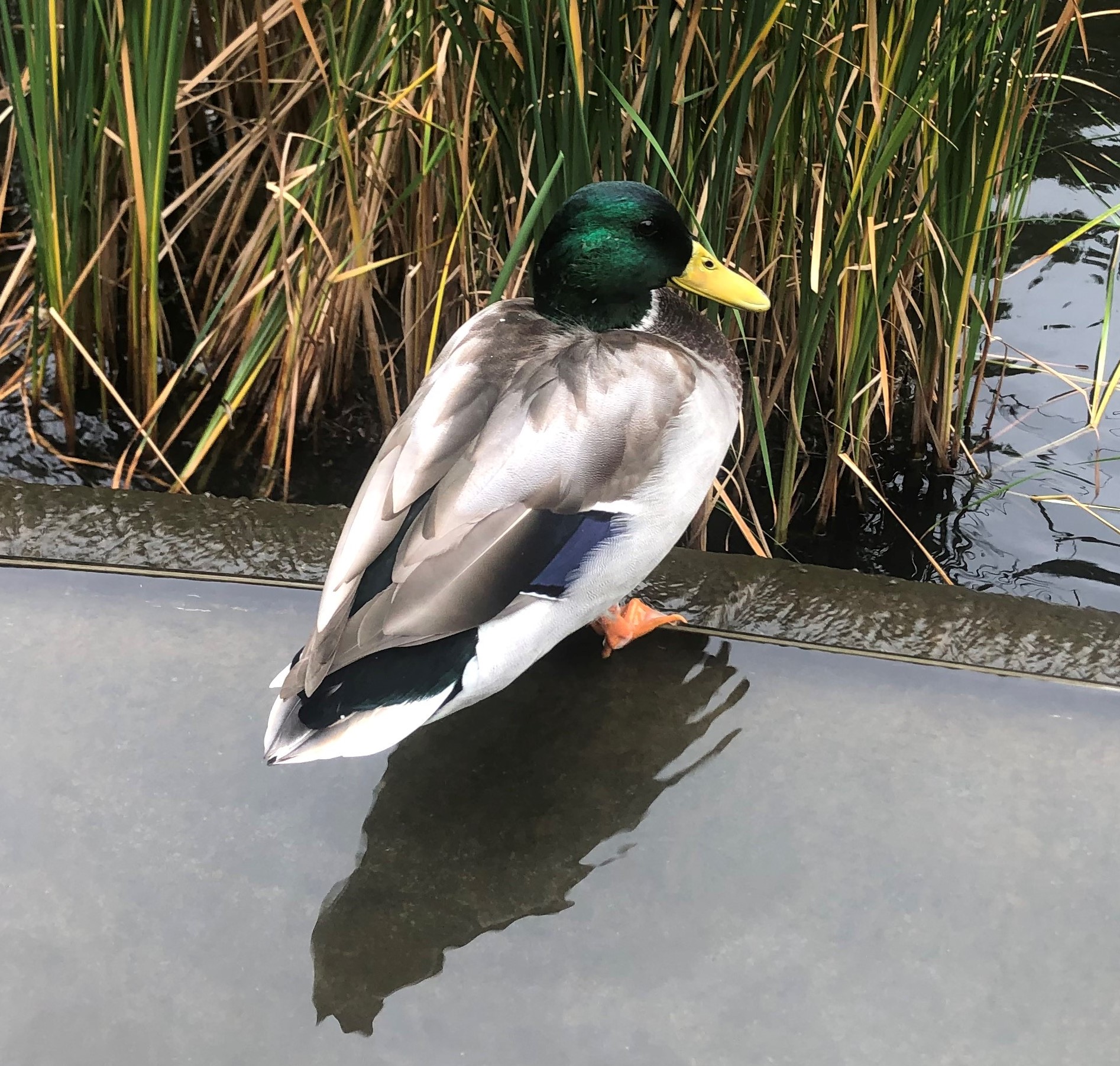 BY DASHIELL ALLEN | From early spring to late fall the Rockefeller Park lily pond is swimming with mallard ducks. The Battery Park City spot is a beloved meeting place for locals and visitors alike — especially families with small children — to reconnect with wildlife.

On any given day there’s between 30 to 40 ducks surrounded by their onlookers.

“It’s nice for the kids, they really enjoy it,” one parent said. She stops by with her daughter whenever they go to the playground.

This year the pond saw a record number of ducklings hatch: 29 in total across five broods, out of which 26 survived, according to Michelle Ashkin, a local wildlife expert and co-director of education at The Wild Bird Fund.

“This is the first year that we’ve had this many broods from my recollection,” said Ashkin, a Battery Park City resident of more than 20 years.

“Especially during COVID, this was a place — last summer and this summer — where people came and got so much joy, comfort and a sense of peace, from connecting to nature and to these little ducklings,” Ashkin said.

Ducklings take around eight weeks to learn to fly, according to Ashkin, during which they are vulnerable to threats ranging from predators to drowning.

Unlike many young birds that depend on their parents to feed them, ducklings must feed themselves from the moment they’re born, and need to find food and water within 48 hours of hatching. That would present a challenge in a dense urban environment like Lower Manhattan if it weren’t for the lily pond.

“The reason they’re here is because this is the only habitat that resembles a wetland,” Ashkin said.

And the neighboring Irish Hunger Memorial makes for the perfect nesting ground.

While they do find some food sources in the lily pond, Ashkin noticed that the ducklings were struggling to survive in the manmade habitat. That’s why she organized a group of volunteers, BPC Ducklings, to feed them defrosted frozen peas and duck food for up to eight weeks.

This season’s resounding duckling success could be attributed to the ingenuity of mother ducks, said Ashkin, who holds a master’s degree in conservation biology and teaches a course at Columbia University on animal behavior.

She shared the story of “Cracked Beak,” an experienced mother duck “hen” that she recognized from previous years. Typically, only one hen and her brood can survive at a time in the pond; if there’s more than hen, they tend to fight each other and the ducklings often don’t survive, Ashkin explained.

But Cracked Beak “made it absolutely clear: Do not mess with me and do not mess with my ducklings, and if you do, I’m going to go after you. She demanded their respect,” while peacefully living next to another duck’s brood, Ashkin said.

The Hudson River as a whole is an inhospitable environment for ducklings, mainly due to its lack of riverbanks.

“Instead of what we would consider a living shoreline, or a natural riparian edge that slopes gradually to water and is filled with nurturing vegetation, we build walls along our waterways, and that prevents the ducklings from being able to get out of the water,” explained Anna Lewis, president of the nonprofit City Wildlife.

“They’re not waterproof at birth, so when the mama duck leads them into water, they can swim for about maybe one or two hours without getting waterlogged,” she said.

Based on her own observations, Ashkin has seen young lily pond ducklings swim for as little as 15 minutes before coming up onto land for a rest.

If and when the ducklings make their way over to the Hudson River they inevitably drown because there’s no way for them to get out of the water.

Lewis, who lives in Washington, D.C., said they have the same problems on the Potomac River. She’s figured out an innovative solution: creating “Duck Pads,” floating structures for the ducklings to rest on.

“We took a 4-by-8 sheet of plywood, and then onto the bottom of that we glued floatable foam rubber,” she said. “This will allow the mother who has taken her ducklings into the channel to have someplace to get them out of water, and brood them overnight.”

Lewis installed the first prototype last month, after the latest broods of ducklings had flown away, so she’s waiting until next spring to see if they will make good use of it.

Ashkin is in conversation with Lewis, and would like to someday install similar floating structures in New York City’s waterways.

Ducklings may face steep challenges, but over all, their future looks bright, said Lewis.

“Most bird species are declining dramatically, but the mallard is increasing,” she said, “and the reason is that they are so well suited to urban environments.”

And they are beloved by the humans that stop to watch them, both in New York and D.C.

“People love them,” Lewis said. “More people take pictures of the ducks in the Capitol Pool than of the Capitol Building itself.”