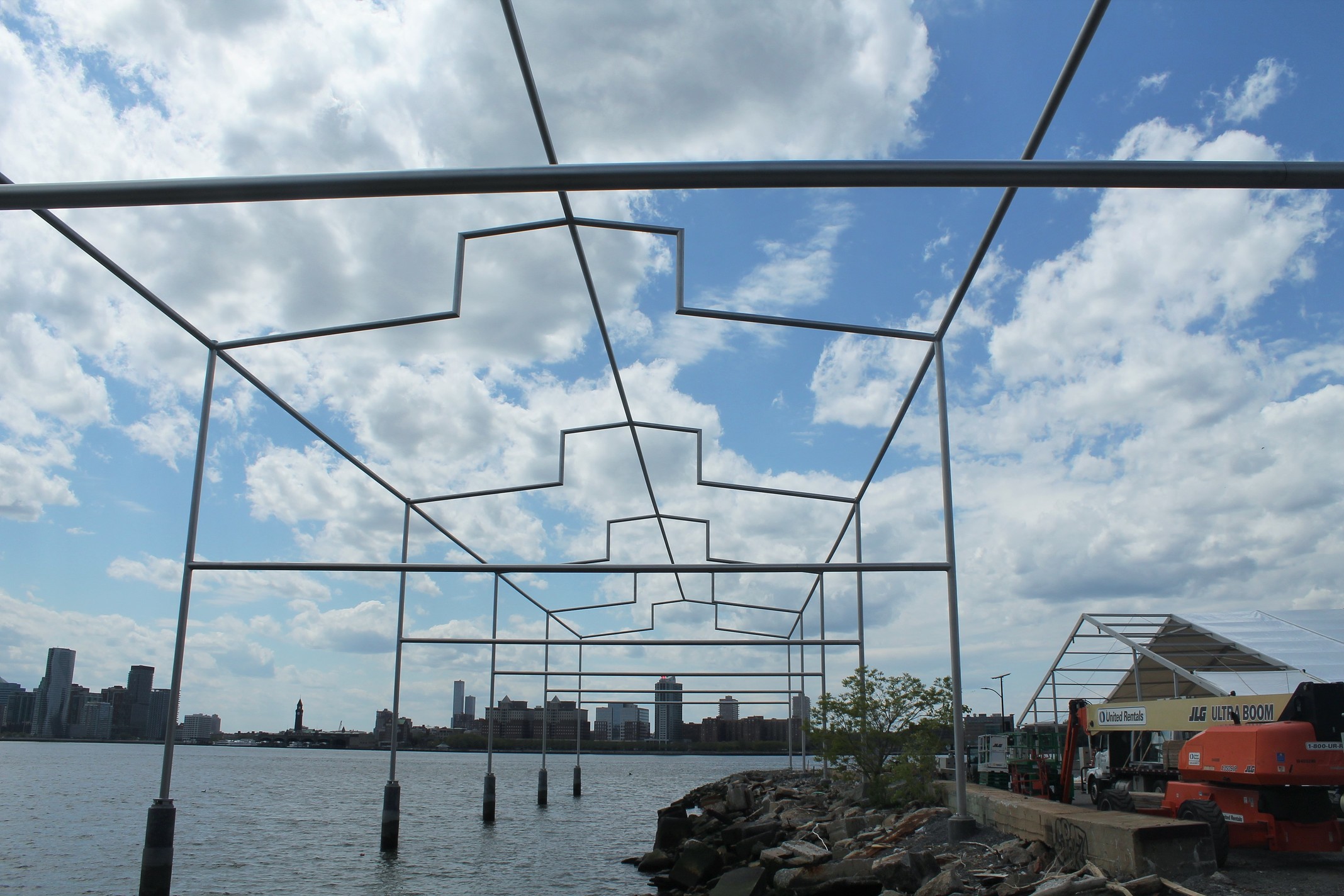 "Day's End," by David Hammons, just south of Gansevoort Peninsula, is 325 feet long, 52 feet high and 65 feet wide, outlines the shape of the former Pier 52 shed that once stood there but was demolished in 1975. (Photo by The Village Sun)

At the End of the Day…David Hammons’s ‘ghost pier’ is overhyped, overly large

BY MICHELE HERMAN | When I headed out for a midday walk the other day my mind was chewing on some problem or other and I hesitated on the sidewalk: east to Hudson Street or west to the Hudson River? For no particular reason I turned left toward the river, still pondering whatever I was pondering, which is how I came to be surprised by my first sighting of the newly completed artwork I knew full well was there: David Hammons’s “Day’s End.”

My, it’s big. That’s what my eyes and my gut told me before my mind had a chance to weigh in. The art piece is an accurate outline, made of steel tubing, of the Baltimore & Ohio railroad’s “shed” building that used to occupy the length and width and airspace of Pier 52. Half of its dozen stout stanchions are planted in the river and half in the raggedy shoreline of Gansevoort Peninsula, currently being converted to a park.

“Day’s End” is simple in conception and shape. And while it’s meant to emphasize its near-nothingness, the tubing is thick and the overall presence of the piece is on a scale approaching those high walls erected around the Chelsea Piers driving range to prevent customers’ golf balls from flying into the river.

Walking this way and that, coming at “Day’s End” from different angles and vantages, I tried to gauge whether my response to the actual thing matched the dubious one I had already formed to the idea of the thing.

Some critics are quick to accuse emperors of being naked; others err on the side of fawning approval. I’m aware that opinions often have resistance or blind spots, on the one hand, or envy or adulation, on the other, mixed up in them. So I will tread lightly.

But I’m going to say it: I think “Day’s End” is misguided, I think it’s being treated with too much reverence, and I hope it marks the end of an era. For all the talk of its ethereality and ghostliness, I find that it exerts a strong presence. At 52 feet by 325 feet by 65 feet, it’s more than three times as deep as a single Manhattan building lot and more than twice as wide, and almost as tall as a five-story walk-up. To my eye it increases the busy feel of the river just when we had an opportunity to make the Hudson more serene and less encumbered.

I think that with the increasingly dire predictions of climate disaster, we’re long overdue for a radical reckoning with the very idea of what and how much we build using raw materials mined from every corner of the earth. I think we humans are fully capable of framing our own views of the mighty Hudson without putting new things in it that don’t need to be there. I think that the reported $17 million — including $4.3 million from the city’s culture budget — that the Whitney raised privately to design and engineer the piece, fabricate the steel and aluminum, ship it from five different countries and assemble it on site could have been put to better use.

Here’s the now-famous origin story of “Day’s End,” which is to be cared for in perpetuity by the Whitney but is owned by the city and state. In 2014, long before the Whitney opened, museum director Adam Weinberg took conceptual artist David Hammons, sometimes described as reclusive, on a tour of the Gansevoort Street site. Hammons was entranced by the river views, zooming in on one particular fading chapter of the waterfront’s history: the 1970s. When air freight and container shipping rendered the dozens of finger piers jutting from the shore obsolete, the piers and the gigantic sheds that covered them fell into disrepair and the West Village waterfront became a gay sunbathing and cruising scene.

In 1975, another conceptual artist from Hammons’s generation, Gordon Matta-Clark, performed an act of guerrilla art on the abandoned steel-truss B&O shed: he sneaked in and cut five large openings of different shapes in the walls and floor to let light in, calling his piece Day’s End and describing it as a cathedral of light. Later that year the shed was demolished.

Shortly after the Whitney tour, Weinberg received an envelope in the mail from Hammons. Inside was no note, just a sketch titled, “Gordon Matta-Clark Monument, Pier 52.” The ghostly outline of the shed, no thicker than pencil marks, seems to float magically in an open river above the wooden footings of the demolished pier. Seven years and $17 million later, there it is, though the steel outlines of the shed are almost as thick as a human waist and the thicker bases speak to me of cast-concrete engineering more than magic.

So far I have found almost no reviews of the actual piece, but much enthusiastic talk around (not about) it, mostly involving a certain nostalgia for the grit and rebellious spirit of the 1970s. I watched various Whitney videos, including a Zoom talk from December featuring experts on Hammons and three other artists (Matta-Clark, photographer Alvin Baltrop and visual/performance artist Joan Jonas), and there, too, the art historians talked about everything but the actual piece, which was made possible by donations from a variety of foundations but also bankers and developers.

Mostly the conversation was about how Hammons and his contemporaries were sly renegades interested in ephemerality, tricksterism and antiauthoritarianism. Hammons was known for his sarcastic wit and unannounced actions (carefully documented by photographer Dawoud Bey, currently the subject of a Whitney exhibit).

In the winter of 1983 Hammons sold snowballs — actual snowballs — on a blanket on the sidewalk near The Cooper Union. He’s also known for two acts in 1981 involving a tall Richard Serra sculpture that once stood at the intersection of Franklin St. and West Broadway. First Hammons tied together 25 pairs of shoes and tossed them over the sculpture, calling his intervention “Shoe Tree.” Then he peed on the piece and got caught by cops, calling this one “Pissed Off.” According to Elena Filipovic, curator/dynamic director of Kunsthalle Basel, Hammons was frustrated with the hulking, expensively produced monolith, which he considered the epitome of white imperialist art.

Once again, I waited for some commentary on the new “Day’s End,” particularly in light of Hammons’s own feelings about Serra, but it never came. I wonder if some of them were secretly having the same thought I’m having: I might toss some old shoes over “Day’s End” myself, except that I can’t throw that high or that far.