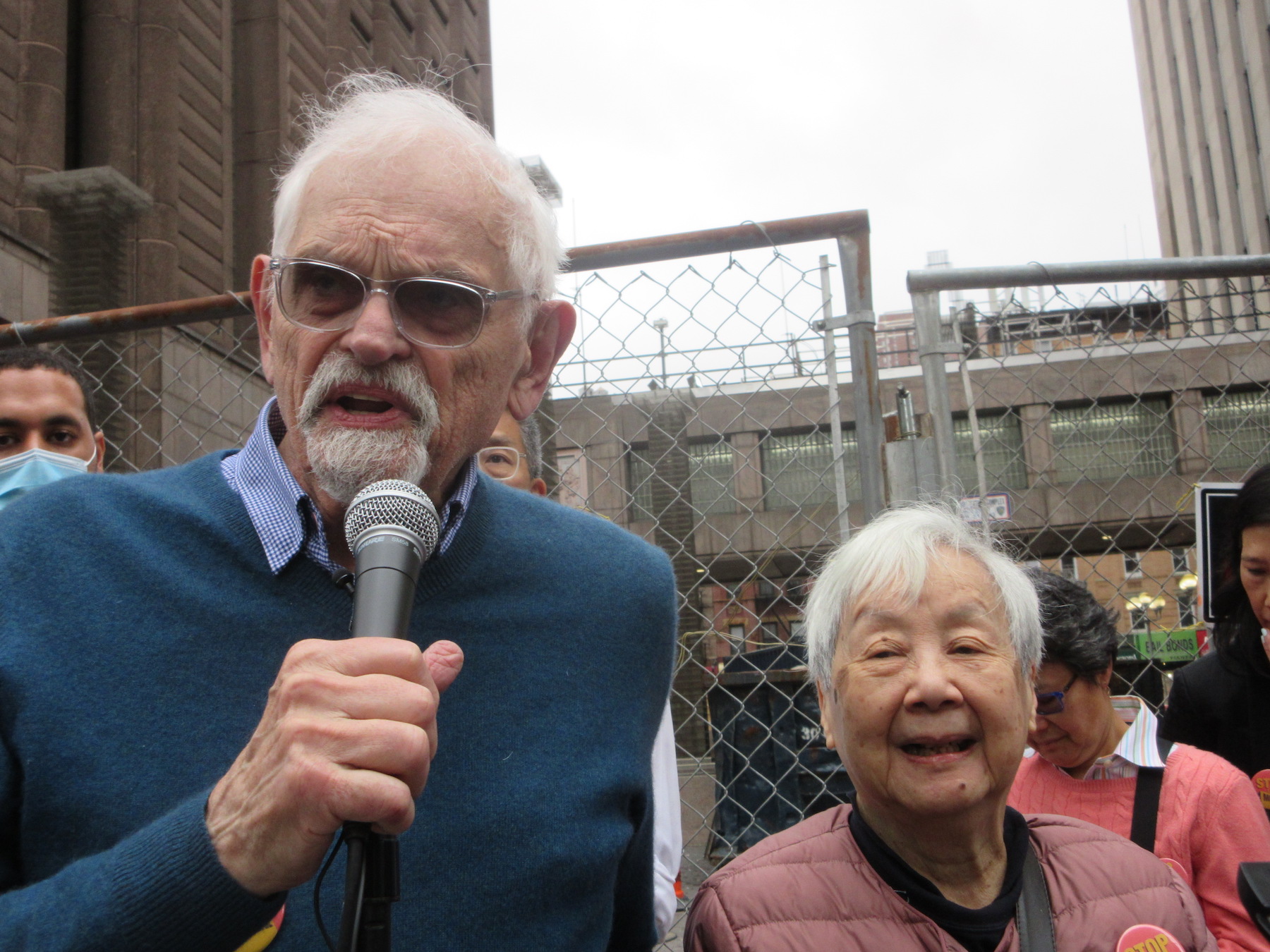 Artists Richard Haas and Kit-Yin Snyder spoke out against the city's plans for their site-specific artwork at the current Manhattan Detention Complex, which is slated for demolition. (Photo by Dashiell Allen)

Artists sue to save works threatened by ‘megajail’ project

BY DASHIELL ALLEN | Artists Kit-Yin Snyder and Richard Haas were shocked to learn last year that their installations outside of the Manhattan Detention Complex would either be destroyed or removed from public view this spring. Their artworks’ fate hinged on then-Mayor Bill de Blasio’s borough-based jails plan to close Rikers Island, which involves building a new so-called “megajail” in Chinatown.

In an attempt to preserve their pieces, the two artists filed a federal lawsuit on Thursday, with the support of Neighbors United Below Canal Street (N.U.B.C.).

Snyder’s sculpture, titled “judgement,” consists of seven geometric columns near Centre and White Streets, as well as a chair on top of the bridge connecting the two jail buildings, which represents the throne of Solomon.

Previously, a pavement design at the artwork’s foot had read “fair” and “upright” in Chinese characters. However, this has been covered over since the art piece’s completion in 1992, which is another issue of contention in the community.

While the Department of Cultural Affairs intends to preserve Snyder’s work, it is slated to live in storage at Rikers Island, with no plans to reinstall it elsewhere, the agency previously told THE CITY.

“When I heard that, I was so sad to see my work going to jail, that’s pretty much what it means to me,” Snyder said at a press conference Friday.

Haas’s murals, carved directly into the jail’s wall along Baxter Street, depict the history of immigration on the Lower East Side and Chinatown. However, unlike Snyder’s work, they appear to be slated for the wrecking ball.

A Cultural Affairs spokesperson confirmed to Community Board 1 at a tense meeting last December that, due to the murals’ connection to the jail facility, the demolition of which is expected to start this spring, it would be impossible to preserve them.

Per the city’s own estimate, artwork removal and storage — and, in some cases, destruction — is expected to occur sometime this month.

But the artists say they won’t be defeated that easily. Their case, filed in the Southern District Court of New York, argues that the Visual Artists Rights Act of 1990 “protects their moral rights to their artwork in order to save their artwork from destruction and mutilation, and preserve it for the public to enjoy,” per an N.U.B.C. press release.

The two artists, being represented pro bono by the global law firm Sheppard Mullin, are hoping for a temporary restraining order, to prevent their installations’ dismantling and/or destruction.

“People forget when they look at the artwork, they forget there’s a person behind it that built it,” Snyder said on Friday, adding that it took her seven-and-a-half years to complete her installation. “But when Richard and I won the Percent for the Art competition, we were so pleased. I was so happy. The fact that I, as an immigrant from China, a woman, Asian, got the Percent for the Art — and not only that, we got an Excellence in Design award from the city for this whole project. I want to thank New York City for being what it is that nurtured me.”

“More than ever, I think people realize, too, how important public art is and has been in the city — a city that’s being changed with or without their approval,” said Hass, who created the murals on Baxter.

Snyder’s daughter said she was “shocked” to hear last December about the city’s plan for her mom’s art.

“The whole pace of this, and the lack of full disclosure, for me, of what was really going on,” she said. “To bring down someone’s legacy is not fair.

“This speaks to a larger issue in the community of how the city is disinvesting and erasing our culture,” said Jan Lee, a co-founder of N.U.B.C., in a phone interview. “The Census tracts have revealed in the last Census that Chinatown’s population is actually shrinking, and now we’re taking away artwork that’s intended for that spot.”

A spokesperson for Mayor Adams’s office previously told The Village Sun, “This administration will always follow the law, and the law says the jails on Rikers Island must close on time. To follow the law and protect the safety of the community and all involved in this project, this work is proceeding. We have engaged deeply with the community every step of the way, and we are committed to continuing to work with them to limit the disruption of this project.”