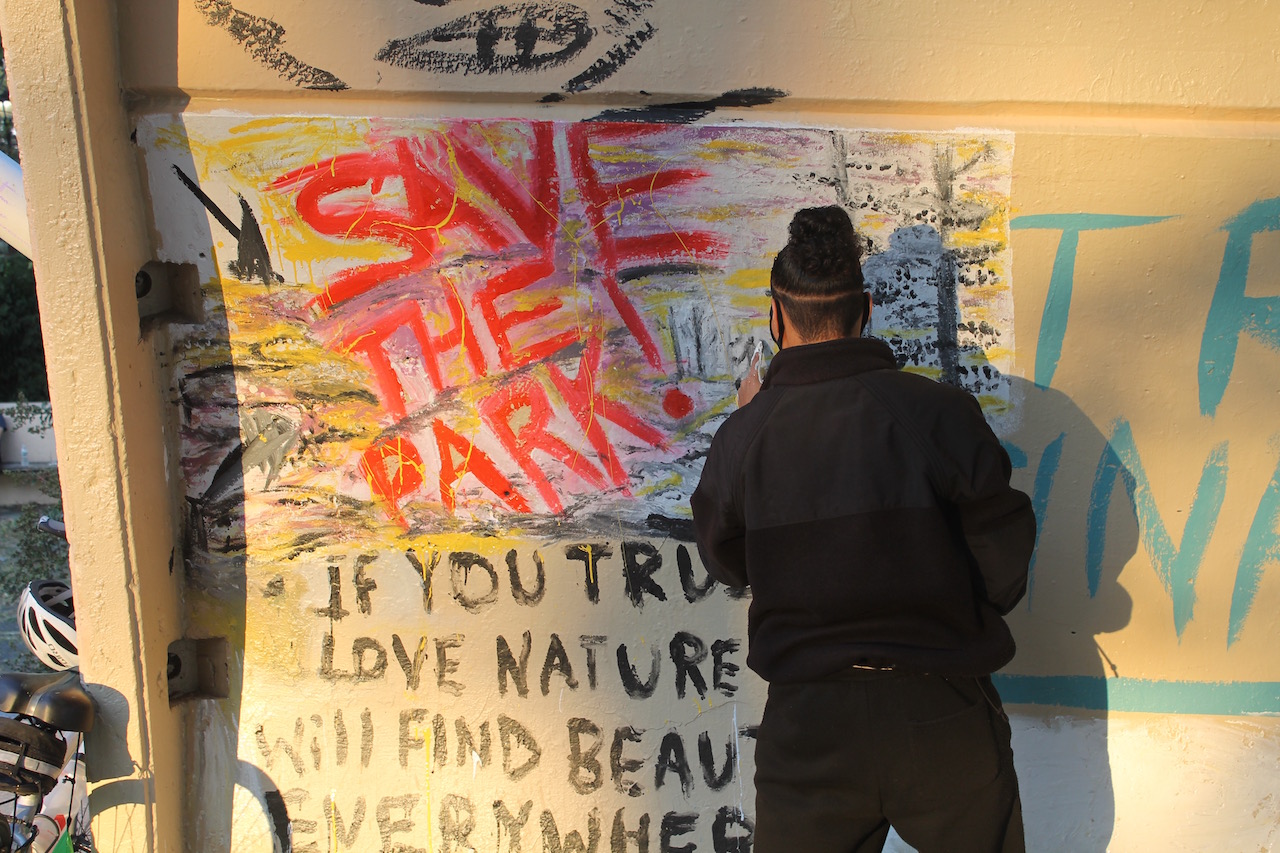 Annika Samuels worked on graffiti art inside the East River Park amphitheater on Saturday. (Photo by The Village Sun)

BY LINCOLN ANDERSON | Call it speed graffiti for a cause.

In a last-ditch bid to save East River Park from destruction, artists descended on its amphitheater at Corlears Hook late Saturday afternoon in what was dubbed an Art Attack.

Working rapidly, in just a couple of hours they had festooned the structure and the plaza behind it with a riot of graffiti art and murals.

Sixty percent of the park is set to start being buried under 8 to 9 feet of dirt next month as part of phase one of the East Side Coastal Resiliency plan. The $1.45 billion scheme is meant to raise the park above the floodplain to protect the surrounding community against storm surges and deluges from future Sandys.

As for the Art Attack, as first reported by The Village Sun, the idea was initially broached at a strategy meeting of East River Park ACTION in August.

The tactic was inspired by a lawsuit that was filed over the demolition of 5 Pointz, a graffiti-strewn former factory building in Long Island City, in 2014. In that case, the artists argued that, under the Visual Artists Rights Act of 1990, they were not given the legally required 90-day notice before the building was razed. Twenty-one artists wound up winning $6.7 million.

After taking a break to enjoy pizza donated by Two Boots, the artists painting the amphitheater called it a night around 6:30 p.m. But they planned to return the next afternoon to add onto what they had already created, extending the artwork out more onto the plaza and possibly the esplanade along the river, to make it even more visible.

Ian Knife, a Stuyvesant Town artist, said he thinks the VARA angle can work in the amphitheater’s — and the park’s — favor.

“I think the piece is definitely going to have value,” he said of the Art Attack. “It’s going to slow down the process [of demolishing the park]. We hope it’s going to start a conversation.”

Word had been that Tom Otterness would participate. A couple of weeks ago the Lower East Side artist — known for his quirky brass subway figures — had even done some preliminary drawings for the Art Attack in his distinctive style. But he was reportedly out of town on Saturday.

One big name that did make the scene was Al Diaz, the graffiti partner of the late Jean-Michel Basquiat. Diaz showed up toward the end of the event and spray-painted a piece on the amphitheater’s uptown-side exterior.

Also joining the artists, though not painting, was Pat Arnow, the leader of East River Park ACTION, which has sued in court to stop the E.S.C.R. plan. The opponents say the city’s scheme is far too extreme and that the project’s original design is what should be executed — namely, to build a simple earthen berm along the east side of the F.D.R. Drive instead of burying the park and felling 1,000 trees.

Naturally, the guerrilla event didn’t have a permit. As the artists worked, helpers kept an eye out for police and Parks Enforcement Patrol officers. At one point, a helicopter flew overhead, but Patricia Perlo, a marathoner who used the park’s track to train, said it was “too high” to see the graffiti going on below and also did not have N.Y.P.D. markings.

At another point, they heard a loud whistle, at which Knife told everyone, “Put your cans in the bushes and walk away!” But after a few minutes he said it appeared it was a “false alarm.”

Barbara Augsburger, a member of East River Park ACTION, was watching the artists at work on Saturday. Having had three dogs over the years, it’s been her routine to visit the park every day.

“Every day, every morning,” she said. “Most of my best friends, I met in the park, they’re dog walkers.”

She said a grassy bluff that was glowing golden in the sunset just south of the amphitheater is her favorite spot in the park.

“You always get a breeze there,” she said.

She noted she recently saw a photo of East River Park when it was first being built — it was completely barren with no trees — and she got an ominous feeling about a post-E.S.C.R. park.

“I’m afraid it will look like that,” she said.