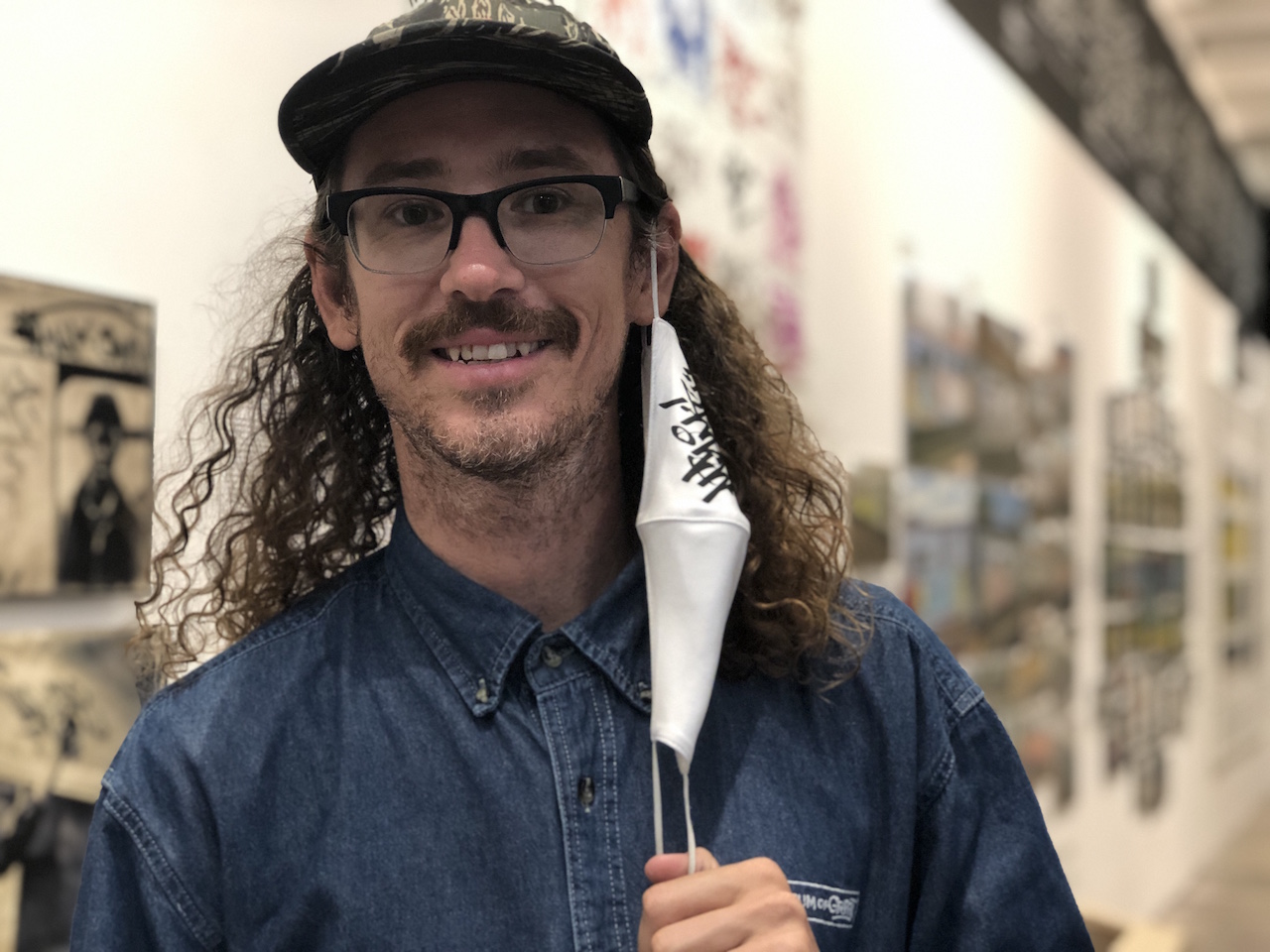 In addition to his own graffiti art, Ryan the Wheelbarrow is known for leading graffiti tours in Miami's Wynwood art district. (Photo by Gayle Kirschenbaum)

Art or vandalism? How my relationship with graffiti changed since the ’70s

BY GAYLE KIRSCHENBAUM | I’ve been away from my West Village home for longer than expected. With my 97-year-old mother suddenly ending up in the hospital (not due to COVI) in Boca Raton, Florida, it didn’t take long for me to pack and head down there. I stayed to nurse her back to health. Thankfully, she’s fully recovered and I’ve been doing some socially distanced exploring.

I was figuring out recently what I could show a visitor to South Florida during the pandemic besides the ocean and nature. How about art, I thought?  Then I remembered my past couple of visits over the last few years to Wynwood, Miami. It’s an art district that was a downtrodden industrial area that is now where graffiti artists create new work and display old ones. I asked a local friend what he thought of checking it out and he couldn’t agree more. So off we went. It was an extremely hot day as we started walking the streets and tried to stay on the shady side.

Wynwood Walls, the outdoor museum of international street art, became a phenomenon attracting the world’s greatest artists working in graffiti and street art throughout the district. Wynwood’s development was the brainchild of the late Tony Goldman, who was also instrumental in the refurbishment of Miami Beach and New York City’s Soho neighborhood.

Wynwood Walls was still closed due to COVID. With the sun baking on us, we were eager to get into air conditioning. I asked a passerby if there were any indoor museums that were open. Her response led us first to the Walt Grace Vintage Cars & Guitars museum/store, where they took our temperature at the door and had plenty of hand sanitizer. I was thrilled about that. There was an assortment of vintage cars, including Jaguars and Mercedes-Benzes.

One car had on its trunk rack a vintage Louis Vuitton suitcase. I told the salesman my mother had the same one in better condition. He informed me that it came with the car.

As we were neither guitarists nor musicians, we walked through that part of the exhibit quickly. What caught my attention was the guitar that was shaped like an ass. I questioned the staffer who was taking us around. He indicated it was meant for persons who consider themselves “bad ass” guitarists. The owner fulfilled his dream of a place focused on his two passions, and apparently he is not the only one who enjoys that combination.

Then we were directed across the street to the Museum of Graffiti. We chatted outside at the ticket desk with a graffiti artist named Ryan the Wheelbarrow. Ryan escorted us in and gave us a quick tour of the museum. It was co-founded by Alan Ket, a graffiti artist, archivist and advocate originally from Brooklyn, and Allison Freidin, a former prosecutor who did legal advocacy for graffiti writers. She quit her job to focus with Alan on creating the museum, which opened in 2019.

Being a New Yorker who lived in the city beginning in the ’70s, I was taken back in time when I saw a large collection of images of the graffiti-filled New York City subways. They were documentary photographs by Henry Chalfant, who captured street art and urban culture in the city in the ’70s and ’80s. There was one particular image that had a strong impact on me. It was the face of a sullen woman standing by a subway door looking out through its window. In the photo, she is framed by a massive amount of graffiti.

Although I’m an artist who loves and appreciates the arts, I remember my disgust at seeing the trains’ surfaces getting more and more covered with spray-painted words and images. Why do they have to destroy the property, I wondered? This was vandalism. And then it spread from the subways to my beloved buildings, several old and some landmarks. The vandals, as I saw them, were even able to reach high surfaces, such as bridges, which took a great deal of effort and risk.

In New York City in the ’70s and ’80s, the goal was surviving. Taking a subway late at night was not advisable. I witnessed crime all over. There was the popular stealing of women’s gold necklaces, either with a thief sticking his hand through the opened window of a stopped bus, or just coming from behind you. We carefully tucked our chains into our clothing or stopped wearing them. I was pickpocketed as I was using a pedestal phone booth. It was a two-man job as one asked me something and the other was behind with his hand in my leather hanging shoulder bag. People were getting robbed, beaten and stabbed.

The topper for me was when I entered my apartment after taking an intense weekend workshop at 2 in the morning and saw a burglar ransacking my home. Just as I was distressed by the vandalism I personally experienced, I was not in the mood to admire the artistry of the graffiti. I only felt more violated.

And then I saw it spread beyond my city, beyond my country and it was now in Europe. On one of many visits to Paris, the city I was drawn to since I was quite young for its architecture and culture, I was devastated to see what I left behind in New York and was now facing me on the surfaces of Paris, only in French.

Although it’s been years, actually decades, since my first exposure to graffiti, it took my visit to the Wynwood art district, including the Museum of Graffiti, for me to stop and take a good look at the images and appreciate and admire the artistry and the message. The voices of people eager to be heard, eager to be acknowledged and, most importantly, eager to be loved. Something we all want. Screaming out loud, I’m here, listen to me, look at me.

Graffiti began as a response to the hardships at that time, a mid-’70s financial crisis resulting in decaying neighborhoods and infrastructure. The officials believed the graffiti was defacing their city, but the artists believed their work added character and uniqueness to the urban landscape. Graffiti began as an expression of the ghetto, a defiant shout of identity and courage of the individual.

Some graffiti artists/writers achieved celebrity status. Wynwood has offered surfaces to these voices to express and create.

Ryan the Wheelbarrow pointed me to a couple locations in the district where I got to see his work. His monochromatic, amorphous style left me seeing and feeling the sensuality of human forms. Originally from Phoenix, where he was trained as a graphic designer, he’s a known entity in Wynwood, not only for his work but the tours he gives. Who better to give you a tour of graffiti than one of the artists?

If you find yourself near Miami, even during these restricted COVID days, don’t forget your mask and head over to the Wynwood art district. There are also cafes and restaurants that follow the pandemic guidelines. You could satiate your appetite for food and beverage, while also exploring the graffiti and the messages being conveyed by the artists. I was grateful for the chance meeting with Ryan and my stroll back into graffiti with a new and enlightened set of eyes.