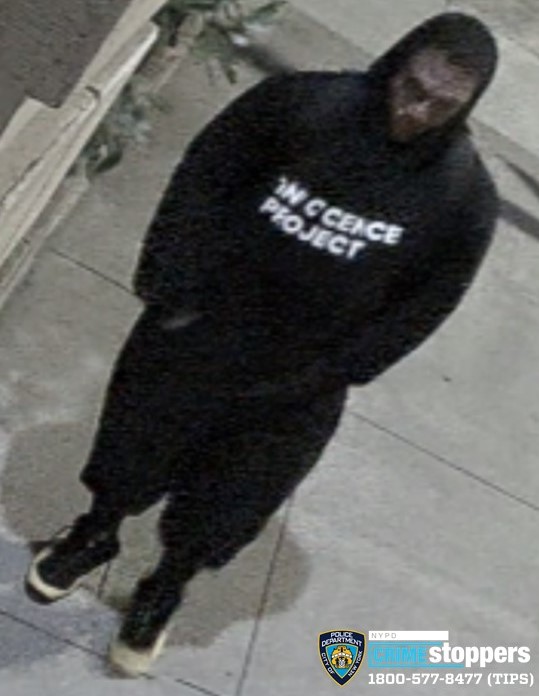 In at least two of the attacks the suspect wore a black, hooded sweatshirt with Innocence Project printed in white letters on its front. (Courtesy N.Y.P.D.)

BY LINCOLN ANDERSON | Updated July 13, 1:15 p.m.: Police on Wednesday said they had arrested the man they believe was behind the recent wave of stabbings, one fatal, of homeless men sleeping on Manhattan’s streets and in its parks at night.

Police said Trevon Murphy, 40, who himself was homeless, was arrested in Upper Manhattan earlier Wednesday morning. A passerby called 911 and notified nearby officers after seeing a man who matched the suspect’s description, according to the Citizen app. Murphy was reportedly arrested without incident and with a knife in his possession.

He was charged with murder, plus two counts each of attempted murder and assault.

According to Citizen, Murphy had been residing in homeless shelters and has an active warrant in Tennessee related to a narcotics conviction.

In a press conference the day before the arrest, police announced they had linked the suspect in the July 5 fatal stabbing of a homeless man in Hudson River Park’s Greenwich Village section to two other recent similar attacks.

Police said it’s believed the same attacker later struck days later in east Midtown and also on the Upper East Side, each time targeting homeless men sleeping outside, each time stabbing the victim in his abdomen. Unlike the Village attack, though, the other two victims survived.

“Over the past week there have been multiple stabbings in three different Manhattan precincts,” Police Commissioner Keechant Sewell said at a press conference at Police Headquarters on Tuesday. “One victim succumbed to his injuries.

“These are senseless acts on defenseless people experiencing homelessness,” she said. “And somebody knows this person. … We need to get this killer off our streets as quickly and as safely as possible.”

Sewell said police were working with the Department of Social Services through its street outreach teams and with nonprofits to stress to homeless persons that they engage with “the importance of being alert and to seek indoor shelter.”

The victim in the Tues., July 5, murder was sleeping on a bench at 3:10 a.m. on the Hudson River Park esplanade when the murderer attacked. Chief James Essig, the Police Department’s chief of detectives, on Tuesday said the victim, 34, was sleeping at Christopher Street when “he awoke to pain in his stomach.” The victim crossed the street, where a passerby called 911. The wounded man was taken to Bellevue Hospital, where he died.

A Daily News report had claimed, based on the account of a park worker, that this first victim was attacked at 11th Street in the waterfront park, then staggered several blocks south to Pier 40, where he collapsed and was found. But the police version of events that Essig related did not jibe with any of that.

The killer, according to Essig at the time, was thought to be roughly 30 years old. In the first attack, as previously reported, he wore a black, hooded sweatshirt with “INNOCENCE PROJECT” printed on it in white letters, as well as black pants. Essig said the suspect also wore a gray backpack and bright neon sneakers — apparently meaning the soles were bright neon.

Video of the actual stabbing in Hudson River Park was not caught on camera. However, some of the killer’s actions in the immediate surrounding area were recorded. Notably, he first took a spin on a Citi Bike that the victim had left lying on the ground next to him.

“He picks up that victim’s Citi Bike,” Essig said. “He rides it around the block, returns. He then stabs the victim. He then removes a black backpack belonging to the victim.”

Police recovered the backpack nearby, he said.

Next, according to Essig, on Fri., July 8, at 10 p.m., a 59-year-old man was lying “along the building line” at Madison Avenue and E. 49th Street when a man stabbed him in the stomach. He said the attacker had put on a face mask and sat on a nearby bench for 30 minutes before stabbing the victim.

The wounded man did not report the incident until July 10, however, because he felt “he could self-treat,” the police chief said. This second victim was then transported by ambulance to New York Presbyterian/Weill Cornell Medical Center in stable condition.

The suspect was described as wearing a black T-shirt, black pants, bright neon sneakers and a gray backpack.

A few days later, on Mon., July 11, at 3:30 a.m., a 28-year-old man was lying on top of his clothes on the basketball court at Stanley Isaac Playground, at E. 95th Street and the F.D.R. Drive, when the same suspect plunged a knife into his stomach, Essig said. The victim reported he “felt a punch in his side.”

He tried to chase down the attacker but couldn’t due to the severity of his wound. The injured man was transported to Metropolitan Hospital in stable condition.

The third victim, whom Essig called “our best witness,” was able to describe the assailant’s weapon as “a large kitchen knife.”

Anyone who has any information about the attacker or who saw anything should contact Crime Stoppers, at 1-800-577-TIPS, the detectives chief added. All phone calls and tips are confidential and the tipster could receive a cash reward.

Essig said it’s believed the suspect “may have been using the subway” to get around. He added that “there’s no information” that the attacker and his victims knew each other. So, it apparently was also erroneously reported in the same Daily News article cited above that the killer knew the first victim, attributed to “a police source.”

On Tuesday, the detectives chief said it was not known if the perpetrator himself was homeless. However, in the subsequent update issued on the suspect’s arrest he was listed as “undomiciled.”

In response to a reporter’s question about the suspect’s distinctive sweatshirt, Essig said, “We have no reason to believe he has any association with the Innocence Project.”

The Innocence Project is a Greenwich Village-based nonprofit that seeks to overturn wrongful convictions through use of DNA testing.