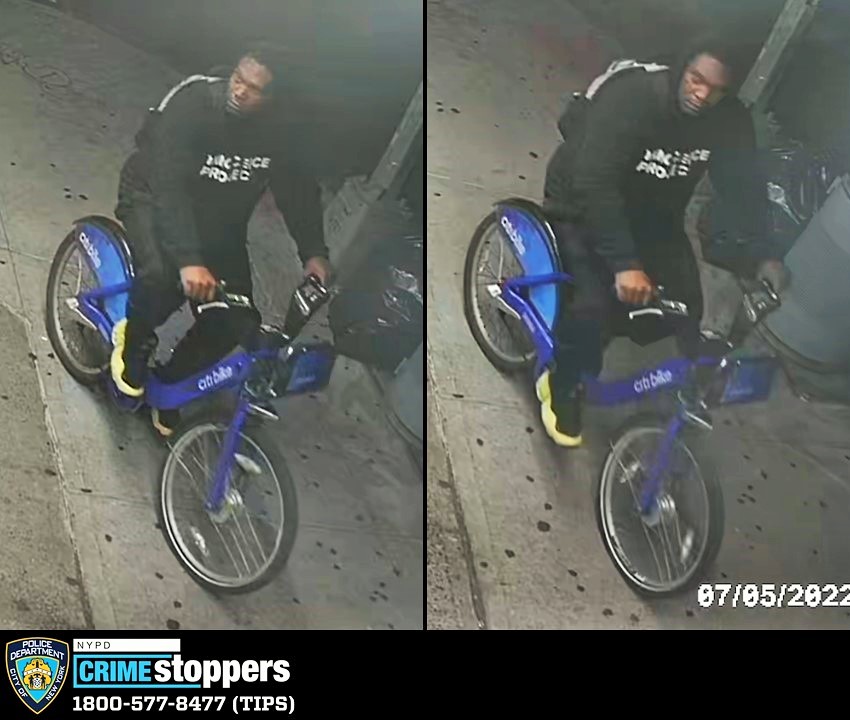 Surveillance images of the alleged suspect riding a Citi Bike after the incident, according to police. (Courtesy N.Y.P.D.)

BY THE VILLAGE SUN | Updated July 10, 1:15 a.m.: Police released more information about the fatal July 5 stabbing of a man in the Hudson River Park’s Greenwich Village section, including images and video of the suspected killer.

In the images and video, the suspect appears to be wearing a long-sleeved black shirt or sweatshirt with the “INNOCENCE PROJECT” printed in white letters on its front. A nonprofit affiliated with Cardozo Law School, the Innocence Project works to free the wrongly incacerated through DNA testing.

Initially, police reported that officers had responded to a 911 call on Tuesday around 4:40 a.m. of a man stabbed at Christopher and West Streets, and found a 34-year-old in the park with a wound to his torso.

In an updated release Friday evening, police said the victim had, in fact, been lying on a bench at W. 11th St. — actually five blocks north of Christopher Street — on the Hudson River Park esplanade, when an unknown man approached him and displayed a sharp object. The attacker then stabbed the victim once in the upper right abdomen.

The Daily News spoke to a park worker, who said the victim had gotten up and, holding his bleeding gut, staggered seven blocks south to Pier 40, where he collapsed and where his body was found.

E.M.S. responded and transported the gravely wounded man to Bellevue Hospital, where he was later pronounced dead.

The assailant fled on foot northward along the riverfront esplanade, police said. In addition, surveillance video shows him walking along a sidewalk outside the park shortly after the incident, and then also riding a Citi Bike along the same stretch of sidewalk.

According to the News, police believe the attacker had a prior beef with the victim, who had previously lived at the E. 30th Street Men’s Shelter on First Avenue.