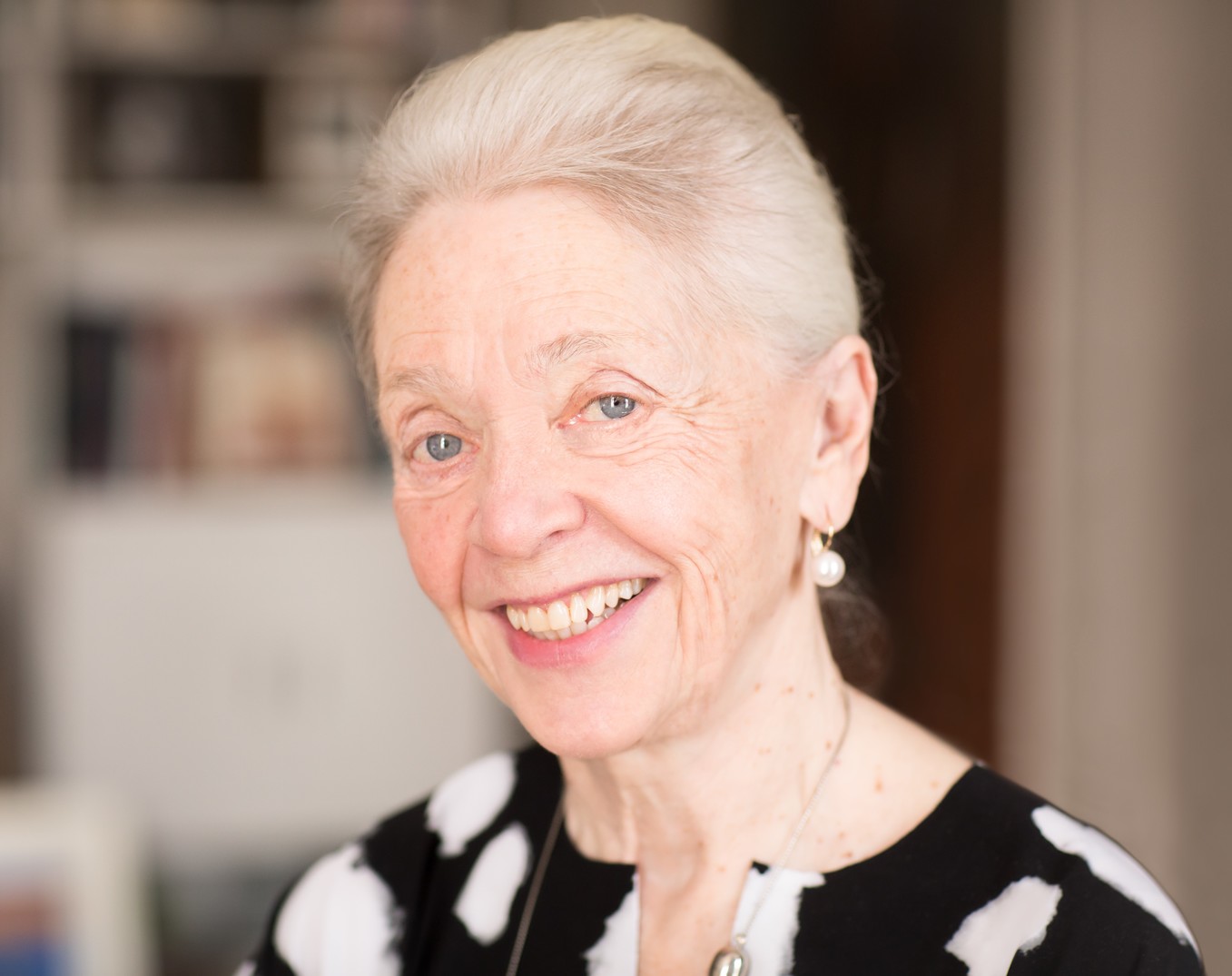 Anne-Marie Sumner was the president of the Washington Square Association for 30 years, as well as an academic and a psychoanalyst. (Courtesy Trevor and Erika Sumner)

Dr. Sumner was committed to the well-being of Washington Square Park and was a vocal advocate known for her altruism, deep compassion, graciousness and unbounded generosity of spirit. As a fellow neighbor recently described, “Her fountain of energy radiated throughout the park and blocks beyond.”

Sumner was born in East Prussia in 1938. During World War II, upon hearing rumors that Russian soldiers were approaching, she, her mother and her sister fled on foot in the middle of the night with nothing but what they could carry. She was 5 years old.

It would be several years until they found safety in Bavaria, and when Sumner was 11, they were sponsored by a relative to come to New York City. She became a naturalized citizen in 1956 and felt both immense pride in being an American and a deep gratitude to the country in which she was able to build a life. She believed in the importance of giving back to her community and in the sanctity of voting, showing up to the polls on election days at dawn with pride to ensure she would be the first person to vote in her district.

An ardent proponent of education, Sumner worked for New York University as an administrative assistant during the day while attending night school to earn her bachelor’s degree from Hunter College in 1963. Two years later she earned her master’s from N.Y.U. and rose to become N.Y.U.’s assistant chairperson of admissions. In 1969, she went on to serve as assistant dean of students at Hunter College and later as associate dean of students at The Cooper Union.

Simultaneously, Sumner received her certification in psychoanalytic therapy from the Washington Square Institute for Psychotherapy in 1975 and within two years was a supervisor with the Institute.

She then started a family and opened her own private psychotherapy practice while still at The Cooper Union, eventually earning her doctorate in psychoanalysis at age 50. Her empathy for others, especially those suffering, knew no bounds and, to this day, former patients stop by her stoop on Washington Square to share how much Anne-Marie helped them.

Sumner was benevolent to her core and felt honored to be able to help others, support her community, and advance the arts, including purchasing cherished artwork in support of The Cooper Union students she mentored. Sumner was a regular benefactor of the Neue Galerie, the Met Opera, Carnegie Hall, the Museum of Modern Art and the Washington Square Music Festival. An especially loyal friend, she was a staunch supporter of mental health and women’s rights.

She served with the Washington Square Association for more than 30 years, over half of which she served as its president. Sumner was devoted to the park and instrumental in securing support and millions of dollars for the park’s six-year restoration, including the restoration of its iconic Arch, which was completed in 2014.

Dedicated to ensuring that the park had a Christmas tree every year, Anne-Marie once paid for the tree herself when funds were low, and regularly opened her home for community meetings and Washington Square Musical Festival celebrations. She relished watching the wonder of children playing in the park and was thrilled to serve as grand marshal for the Greenwich Village Children’s Halloween Parade.

One of her dreams, for the Washington Square Association to host a chess tournament in the park, with an emphasis on children chess players, was realized this past summer. She hoped that there would be annual children’s chess events in the park on an ongoing basis.

Sumner was intrinsically a humanist, who was described by community leaders and acquaintances alike as buoyant, warm and always available to offer a kind ear, sage advice or a helping hand. She possessed a deep capacity for joy that illuminated all nearby, adored Patricia Underwood hats, Marimekko and Issey Miyake, and loved her family, friends and her dog, Homer, intensely.

Anne-Marie Sumner was married to the late Eric Eden Sumner, noted inventor and vice president of Bell Labs, until his death in 1993. She is survived by her children, Erika and Trevor Sumner, stepchildren, Eric Sumner, Jr. and Hilary Langley, a sister, Crystal Dygos, and longtime companion, Bernard Pachter.

Friends and colleagues shared memories of Anne-Marie Sumner at news of her passing.

“Anne-Marie Sumner was a staunch supporter of Washington Square Park over many years, helping the Parks Department obtain the funds for the restoration of the Arch, which signaled the beginning of the larger restoration of the entire park several years later,” he said.

“Anne-Marie headed the venerable Washington Square Association, which has supported concerts, programs, the annual Christmas tree under the Arch, and worked with community groups and individuals to protect and promote one of New York City’s most historic and iconic parks.

“She was a delight to work with and cared deeply for the park and the Greenwich Village community. I will miss her.”

Peggy Friedman, executive director, Washington Square Music Festival, recalled all of Sumner’s help with the festival, plus the friendship they shared.

“Anne-Marie made me feel part of her family,” Friedman said. “We are the same age, but I did not know her until she and Eric moved to Washington Square and we were both married, grown women with young children, playing in the park. I am very lucky not only to have had her as a friend, but also as a colleague, working together on all aspects of the Washington Square Music Festival. She was a generous donor and provider, not only of her home for receptions, but on occasion, her bedroom for female artists to change into their performance gowns.

“I will always remember her laugh, her encouragement and the morning-after breakfasts we shared at North Square,” Friedman recalled, “discussing the night before’s concert, planning the next steps to keep the festival successful and solvent, and ending with a bit of gossip.

“She was a joyful person and her interests in music, visual arts and culture in general spanned both a European and American tradition of humanism and respect for others. An optimist, she was nevertheless concerned about this country’s tilt to autocratic populism that she had experienced in her native Germany. Perhaps that concern was a part of her deep love of Greenwich Village and her hard work to preserve the past, but to look forward into the future. With love to her spirit, and to her children, Erika and Trevor Sumner.”

Lynne Brown, N.Y.U. senior vice president for university relations and public affairs, paid homage to Sumner’s positive spirit and her dedication on behalf of the park.

“Anne-Marie was a graceful and gracious presence in the Village and was dedicated to making Washington Square Park the amenity we all enjoy today,” Brown said. “As the longtime head of the Washington Square Association, she cajoled and galvanized the neighborhood, the local block associations, the community board, civic groups and N.Y.U. all to lend their efforts to the cause.

“The restoration of the Arch was just one of her many legacies — a tribute to her persistence, her collaborative spirit and effective fundraising.”

Elizabeth Butson, the publisher of The Villager from 1992 to 1999, recalled how Sumner took her and her husband, Tom Butson, The Villager’s then-editor in chief, under her wing after the Butsons had purchased the historic weekly newspaper out of bankruptcy. Butson today is also a board member of the Washington Square Association.

“She was the first person to reach out and offer support when Tom and I decided to resuscitate The Villager,” Elizabeth Butson said of Sumner. “She introduced me to local luminaries she felt I should be in touch with, so that our reporting would cover all areas important to what is Greenwich Village.

“I worked closely with Anne-Marie during the years of her chairing the W.S.A. I admired her generous spirit and gracious hospitality. I teased her about her Prussian sense of humor and she teased me back about my Greek one.

“Anne-Marie was a rare, vanishing kind of civic leader,” Butson said. “She was genteel and kind, never negative during a meeting. Never dismissed anyone.

“She was also a good friend, someone I shared good and bad news with, someone I enjoyed sharing a birthday with, to laugh with. And this is how I will always remember her.”

“Our board meetings were always celebratory occasions where Anne-Marie’s zest for life, sunny disposition, elegance and generous spirit set the tone,” Paul recalled. “Her remarkable dedication to keeping Greenwich Village and Washington Square Park special places will live on for future generations.”

Doug Evans, the longtime chairperson of the Washington Square Association and a good friend, said the park simply would not be the same today without Sumner’s efforts.

“I worked with Anne-Marie for over 30 years on Washington Square Association matters,” he said. “She was devoted to her park. And Washington Square Park would not be the wonderful place it is today without her untiring efforts. It seemed she knew everyone in the Village and did not hesitate to call upon them all to help her maintain the park as a unique destination. She was warm, gracious, caring and a wonderful friend.

“I remember enjoying working with Anne-Marie on the recent mammoth restoration of the park,” he said. “And she gave just as much attention to finding ways to control rats without poison. We will all miss her sorely.”

Sugar Barry, another association board member, said of her friend, “The era of style and grace that Anne-Marie Sumner so finely represented is fast disappearing. We, the Village community and I, sincerely mourn our great loss.”

Emily Folpe, author of “It Happened on Washington Square” and also a W.S.A. board member, paid fond tribute to her dear friend and colleague.

“I’m saddened to learn of Anne-Marie’s passing but remember her radiant smile and gracious presence and all she did for the Washington Square neighborhood,” she said. “My deepest sympathy to Erika and Trevor. May her memory be a blessing.”

A memorial service for Anne-Marie Sumner will be held in early spring. In lieu of flowers, memorial donations may be made to the Washington Square Association/Friends of Washington Square Park, Cooper Station, P.O. Box 1395, New York, NY 10276 or at WashingtonSquareNYC.org.