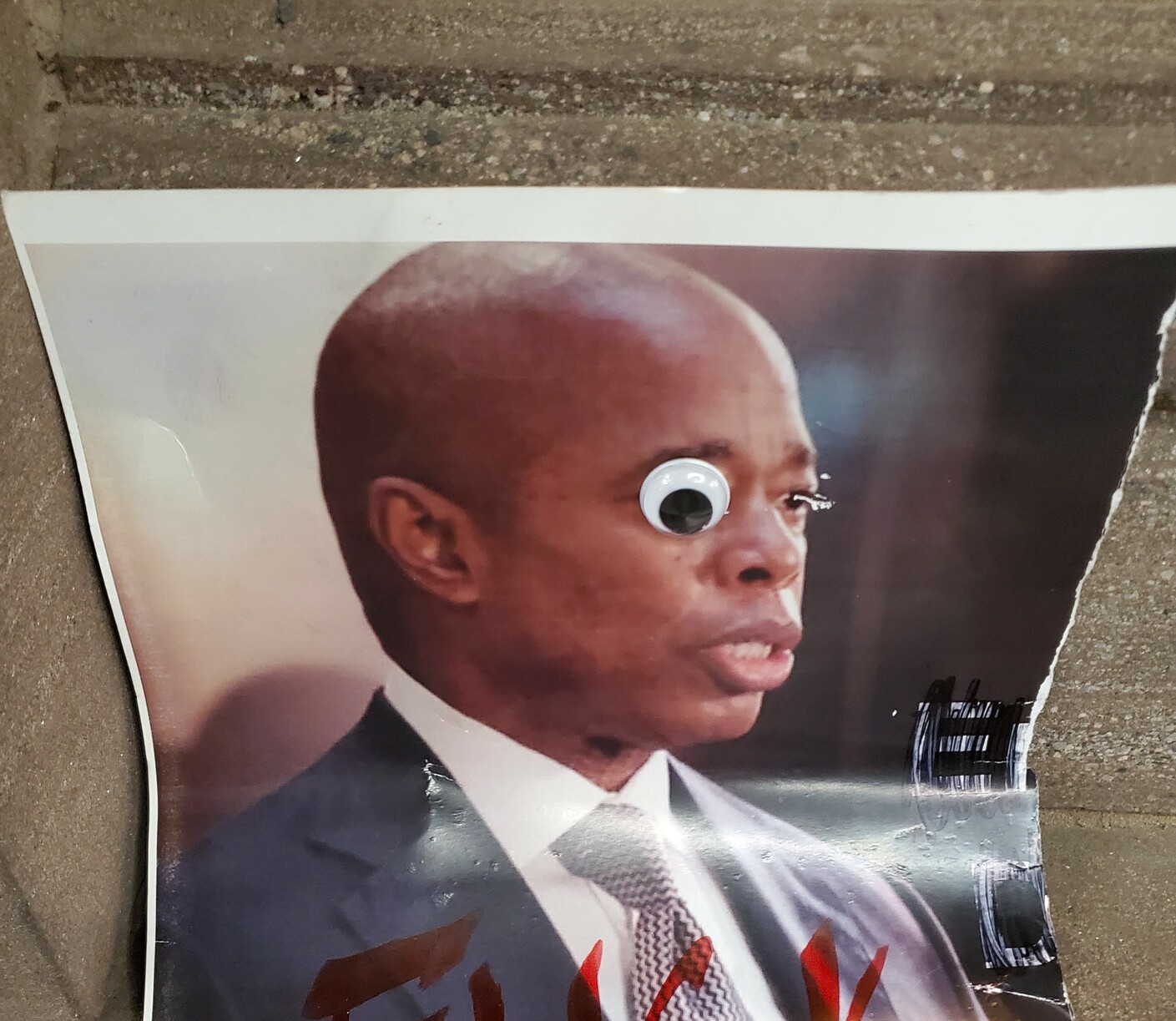 A doctored photo of Mayor Eric Adams with an angry message scrawled on it was left outside The Cooper Union's Great Hall on Tuesday evening after the Rent Guidelines Board voted to raise rents for 2 million New Yorkers. (Photo by The Village Sun)

After board votes to raise rents, tenant advocate urges: Find someone to run vs. Eric Adams

BY LINCOLN ANDERSON | Where have you gone, Bill de Blasio? Tenants turn their outraged eyes to you. (Read to the tune of “Mrs. Robinson.”)

The Rent Guidelines Board’s vote Tuesday to hike rents at amounts not seen in nearly a decade has some advocates actually pining for de Blasio, recalling how he kept increases down during his two terms in office. In two years, 2015 and 2016, the R.G.B. under de Blasio voted for a rent freeze. Two other years during his tenure, there was a partial rent freeze.

One prominent tenant advocate angrily went so far as to tell The Village Sun that now is the time to start finding a pro-tenant candidate to run for mayor in the next election.

“Tenants had better wake up and start looking for a candidate to run for mayor against Eric Adams in three years,” fumed Michael McKee, the treasurer of Tenants PAC.

Tuesday evening at a raucous meeting in the East Village in the Great Hall of The Cooper Union, the R.G.B. voted 5 to 4 to jack up rents on the city’s 1 million stabilized apartments by 3.25 percent for one-year leases and 5 percent for two-year leases.

In a statement that was, frankly, sort of all over the place, Adams attempted to justify the increases, which he dubbed “disappointing.” Yet, he added that tenants’ “quality of life” would actually be endangered without giving landlords a rent boost.

“While we raised our voices and were successful in pushing the increases lower, the determination made by the Rent Guidelines Board today will unfortunately be a burden to tenants at this difficult time — and that is disappointing,” he said after the vote. “At the same time, small landlords are at risk of bankruptcy because of years of no increases at all, putting building owners of modest means at risk while threatening the quality of life for tenants who deserve to live in well-maintained, modern buildings.

“This system is broken,” Adams maintained, “and we cannot pit landlords against tenants as winners and losers every year.

“That is why I have successfully fought so hard for support for working people, like childcare support and a historic earned-income tax credit. It’s also why I will be fighting in Albany for additional support for tenants who are at risk of missing rent payments and landlords who are struggling to maintain and upgrade their buildings.”

However, others were not buying the mayor’s tangents and references to other programs, and stressed that the key — always first and foremost — is to keep rent increases in check.

A disapproving City Council Speaker Adrienne Adams, for one, blasted the hikes as “significant.”

“Authorizing significant rent increases for over 1 million rent-stabilized tenants in a vacuum only adds to the pressures that New Yorkers face at a time when our city’s housing supply is limited,” she protested. “The city must ensure that renters are protected and have the security they need to live safely in their homes, and our housing supply remains healthy. As a Council, we will continue to support all New Yorkers impacted by the housing crisis and rising costs.”

Tenant PAC’s McKee, a longtime tenant activist, said Mayor Adams can’t try to pass the buck and pretend that he was not pulling the strings on the board’s decision.

“He’s a hypocrite,” McKee railed. “This is his doing. He’s made it clear again and again and again that he intends to raise rents. The chairperson [of the R.G.B., David Reiss] has gone from pleasing de Blasio — when he happily backed de Blasio’s call for a rent freeze — to auditioning for Eric Adams.

“This is his board doing his bidding,” McKee said of Adams.

Adams so far has appointed three new members to the R.G.B., one of whom, McKee said, is “a public member who might as well be a landlord.”

Over the next couple of years, Adams will be able to replace all of the board members as their terms expire.

McKee said Tuesday’s vote played out the way it typically does, decrying it as the usual “charade.” Basically, the two landlord members always vote no, saying the increases are not enough, the two tenant members also vote no, saying they are too high, and the five public members then come in with a compromise.

Tenant activist McKee said the mechanism the R.G.B. uses to determine the rent increases — a “price index” of things like fuel, utilities and other operating costs — is “completely misleading.” Instead, he said, what should be considered is New York City landlords’ actual income.

“On average, they are netting 39 percent — 39 cents on the dollar,” he said. “Over the last 30 years net operating costs are going up and up and up. Landlords are doing very well.”

Mayor Adams owns a small Brooklyn building, but it has only three or four units, less than the six units required to be eligible for rent regulation. But clearly, he is sympathetic to small landlords.

“This is the way Eric Adams thinks,” McKee said. “He’s a landlord. He keeps talking about small landlords.”

As for who McKee thinks would better represent the city’s 2 million rent-regulated tenants, however, the advocate said that, as of now, “I don’t have anyone in mind.”