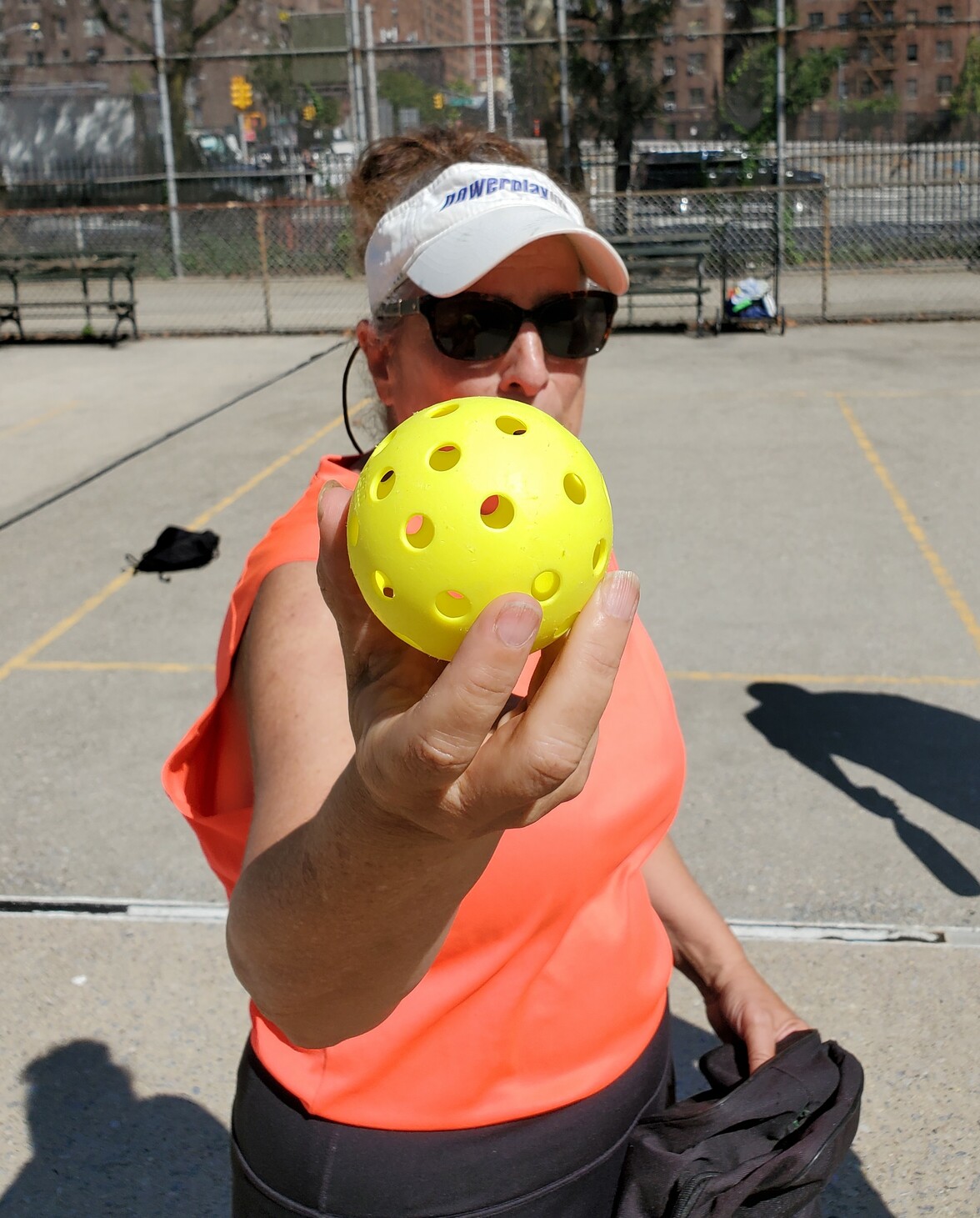 Beth Rasin with a plastic pickleball at the St. Vartan Park courts. (Photo by The Village Sun)

BY LINCOLN ANDERSON | What exactly is pickleball? Is it maybe a gob of squashed-up gherkins you buy at the Pickle Guys on Grand Street? No, not exactly. …

According to Parade magazine, it’s “a small-court sensation sweeping the nation.” Celebs like George Clooney are playing it, the mag reports.

More specifically, Wikipedia tells us, pickleball is “an indoor or outdoor racket/paddle sport where two players (singles), or four players (doubles), hit a perforated hollow polymer ball over a 36-inch-high (0.91 m) net using solid-faced paddles. The two sides hit the ball back and forth over the net until one side commits a rule infraction [i.e., flubs a ‘wounded duck’ into the net.]”

The game was invented 55 years ago in Washington, which this year honored it by dubbing it the state sport.

There’s simply no denying it: Pickleball mania is here.

Locally, you can find pickleball played on the blacktop in Manhattan at places like Passannante Playground, at W. Houston Street and Sixth Avenue; Seravalli Park, at Horatio and Hudson Streets; St. Vartan Park, at 35th Street and Second Avenue; the Central Park tennis courts; and St. Catherine’s Park, at 67th Street and First Avenue.

Despite pickleballs’ plethora of positives, such as exercise and camraderie, it is also…loud! But in a noisy city like New York — as opposed to the quiet suburbs — it doesn’t seem like noise is the main concern about the new sport. Instead, it’s the competition for limited playing space with other park users.

A Parks Department spokesperson did not respond to a request for comment about what the city’s official policy is on accommodating pickleball players.

One passerby who was watching the pickleball action at Passannante Playground earlier this summer, when asked about the game’s noise, shrugged and smiled, “In New York, if this is the biggest of your worries… .”

Nevertheless, a few people have been voicing complaints.

Speaking earlier this summer, Bob Gormley, who recently retired as the district manager at Greenwich Village’s Community Board 2, said the board had received a couple of gripes.

The Servalli complaint apparently involved a conflict with soccer players over use the space. Generally speaking, though, it doesn’t appear that one always needs a permit to play pickleball — but just to find an open court or space.

Gormley noted that, as part of the Parks Department’s plans to remodel Passannante Playground, formal lines will be painted for two dedicated pickleball courts.

Meanwhile, Susan Stetzer, the district manager for the East Village’s Community Board 3, said no locals have expressed any beefs about pickleball itself. When people do call about it, though, she said, they only want to know what is being done to create more space for the sport.

However, more recently there have been reports of tension at the playgrounds in the Village as adult pickleballers increasingly brazenly assert themselves over the space.

St. Vartan Park in Murray Hill is one of Manhattan’s top places for pickleball, and is usually packed with players. On a recent weekday around noon, a foursome was packing up their net after playing.

One of them, Beth Rasin, said there are an astounding 800 people on an online Slack group for the St. Vartan pickleball scene. She keeps the net in her lobby and anyone who wants to play can use it.

Although the stereotype of pickleballers is that they are on the older side, Rasin said there’s definitely a mix of ages at the St. Vartan courts.

“I played with a couple of 27-year-olds who are great athletes,” said Rasin, who is also a competitive squash player.

“That’s the preconceived notion, that pickleball is for the over-55 crowd,” chimed in Eric Penn. “Tennis, you gotta run — a lot of running.”

A pickleball court is a lot smaller than in tennis.

“It’s easier to pick up than other racket sports,” Rasin added.

“It’s the friendliest sport I know,” said Naphtali Offen, who was visting the city. “It’s very social — you sit and talk to people while waiting.

“I just met them today,” he said of the other players. “I brought my paddle from San Francisco.”

In terms of gear, there are, in fact, quieter pickleballs out there, such as one made by Gamma, whose product page explains, “The Foam Quiet Ball by Gamma is a simple solution to the noise complaints about the sound of paddles hitting balls. This ball is made out of foam, greatly reducing the amount of noise produced on impact. … You won’t get the characteristic pickleball pop from the Foam Quiet Ball.”

However, none of these players seemed interested in making the switch.

“I like the ‘pickle,'” declared Barbara Hochstein, referring to the loud “pock” of a solidly struck shot.

On the other hand, what does personally irk Rasin is that St. Vartan Park’s large blacktop playing field area (as opposed to the handball courts / tennis walls area that the pickleballers use) has been turfed over with artificial grass, making it unusable for pickleball. If it had been left blacktop, there would have been that much more space for pickleball games, she said. More than a year ago, the astroturf was put on the playing field and other East Side park areas, like Waterside Park — a pier between E. 38th and E. 41st Streets — to try to offset the loss of green space during the East Side Coastal Resiliency project that is currently destroying East River Park, which will eventually be rebuilt at a higher elevation.

However, as Rasin complained about the huge swath of artificial turf, only one person could be seen out on the field, which is the biggest part of the 2.76-acre park. Rasin conceded that, yes, schools would use the field later in the afternoon, and that on weekends there would maybe be some sunbathers out there. But she maintained that the fake-grass carpet has lessened the playing field’s usage.

“It was a hare-brained idea,” she scoffed, “because it really limited the utility of the space.”

Speaking of whacky — or rather whacking — a couple of days later around 6 p.m., one of the St. Vartan courts was being used for handball while on the three others, twenty- and thirtysomethings were pounding pickleballs.