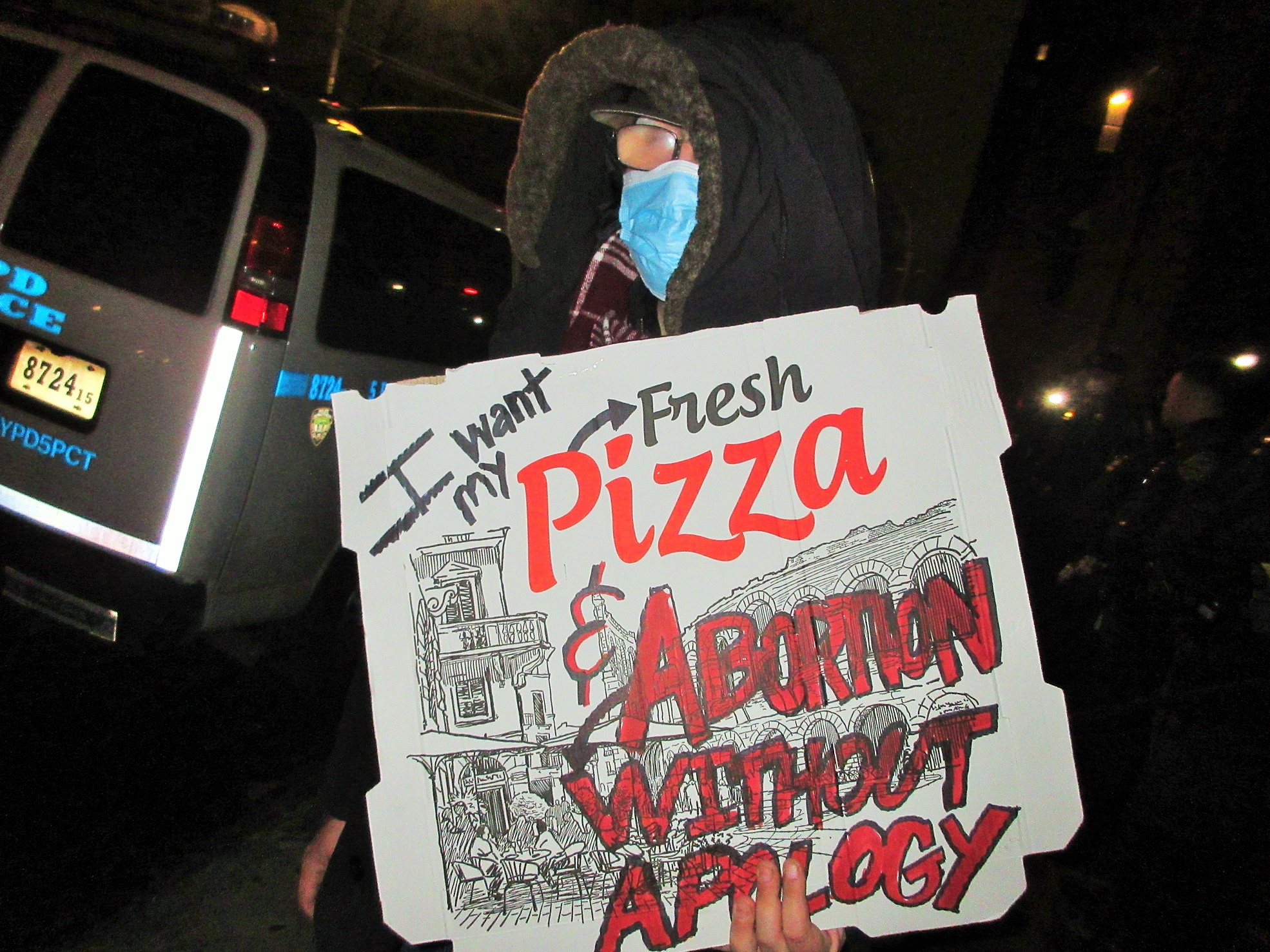 Protesters demonstated outside St. Brigid's Church as a "40 Days for Life" event was happening inside. (Photo by Dashiell Allen)

BY DASHIELL ALLEN | A small but vocal group protested  outside St. Brigid’s Church just east of Tompkins Square Park Tuesday night as a heavily guarded pro-life Mass and organizing meeting was held inside the house of worship.

Their message: “Anti-abortion fanatics are not welcome here.”

“Get better hobbies than policing our bodies!” they shouted from the church steps, as “pro-lifers” hurriedly made their way past them into the building.

“Get up! Get down! New York is a pro-choice town!” they chanted, along with “Fight! Fight! Fight! Abortion is a right!” and “Healthcare is a human right, not just for the rich and white!”

The protest by the grassroots collective NYC for Abortion Rights was organized in opposition to the anti-abortion campaign “40 Days for Life.” According to a Web site for the latter, it is “an internationally coordinated 40-day campaign that aims to end abortion locally through prayer and fasting, community outreach and a peaceful all-day vigil in front of abortion businesses.”

The campaign coincides with both the Christian observance of Lent, lasting from March 2 to April 14, as well as Women’s History Month, which began Tuesday.

During this time, protesters known as “clinic harassers,” stand outside of Planned Parenthood locations across the country, intimidating individuals seeking an abortion. While New York City may be a “pro-choice town,” the public’s overwhelming sentiments do little to counter the pro-life organizers.

Pro-life “clinic harassment” has real-life effects on abortion patients. According to information on the impact of this behavior, compiled by NYC For Abortion Rights, around half of all abortion patients who encounter protesters report feelings of “discomfort, stress, shame and sadness.”

The counterprotest Tuesday evening outside the Avenue B church also specifically targeted Fidelis Moscinski, a Franciscan friar notorious for clinic harassment and “red rose rescues.” In the latter, he spends hours attempting to talk patients out of receiving an abortion, offering them a symbolic rose in the process.

Pro-choice activists began gathering outside the meeting place at 6:30 p.m. as pro-life attendees trickled inside.

A confrontation with at least six New York Police Department officers unfolded on the church’s steps after its doors were shut and the event officially began. Many of the activists attempted to stand on the church steps but the police told them to remain on the sidewalk.

“Leave your hands to your f–ing self!” one activist shouted.

At one point two protesters were shoved to the ground.

An NYC for Abortion Rights member who spoke to The Village Sun, requesting anonymity, said in their experience they are often harassed by the police.

“As we defend clinics,” they said, “we get physically shoved and harassed by cops who are protecting the church’s procession as they’re on their way to harass people.

“So, by definition, there’s not really any way for us to be pro-police and doing this kind of work. And a lot of this is intersectional, too, because if abortion gets banned, cops would be the ones enforcing the law.”

The first Saturday of each month the group holds demonstrations outside the Planned Parenthood clinic on Bleecker Street, countering the protesters there who are shaming patients, some of whom pretend to be official clinic escorts.

The group was formed shortly after former President Trump took office and abortion rights came under attack nationally. They previously held counterprotests outside St. Paul and St. Agnes Church, at Court and Congress Streets, in Carroll Gardens, where pro-choice activists would hold Mass before marching to a nearby abortion clinic.

They succeeded in convincing the Brooklyn church to stop hosting the pro-lifers. Now they are waging a similar campaign at the Basilica of St. Patrick’s Cathedral in Little Italy, where the pro-lifers meet before marching to Bleecker Street.

Across the country, abortion rights are under assault. A recent Texas law banning all abortions after six weeks is currently being reviewed by the U.S. Supreme Court. Meanwhile, other states are drafting similarly worded legislation.

In his State of the Union address Tuesday night, President Joe Biden said, “The constitutional right affirmed in Roe v. Wade — standing precedent for half a century — is under attack as never before.” He stressed it was critical to “preserve a woman’s right to choose,” yet fell short of explicitly saying the word “abortion.”

The anonymous activist said they are “worried but not surprised” about what’s happening nationally. If reproductive rights are compromised in other states, the activist noted, that could lead to more emboldened harassment by pro-lifers outside New York City clinics as patients travel here to seek services.

Toward the evening’s end, the protesters were met with a characteristically East Village treat, when a marching band happened to pass by on their way to Mona’s Bar. The band serenaded them with an impromptu Mardi Gras-themed jazz performance.

Correction: The original version of this article incorrectly identifed the Brooklyn church outside of which pro-choice protesters demonstrated as St. Paul’s Episcopal Church, at Clinton and Carroll Streets. In fact, it was the nearby St. Paul and St. Agnes Church, at Court and Congress Streets, that was picketed by the protesters. The churches are both located in Carroll Gardens about a 10-minute walk away from each other. The Village Sun regrets the error and apologizes to St. Paul’s Church of Clinton and Carroll Streets.