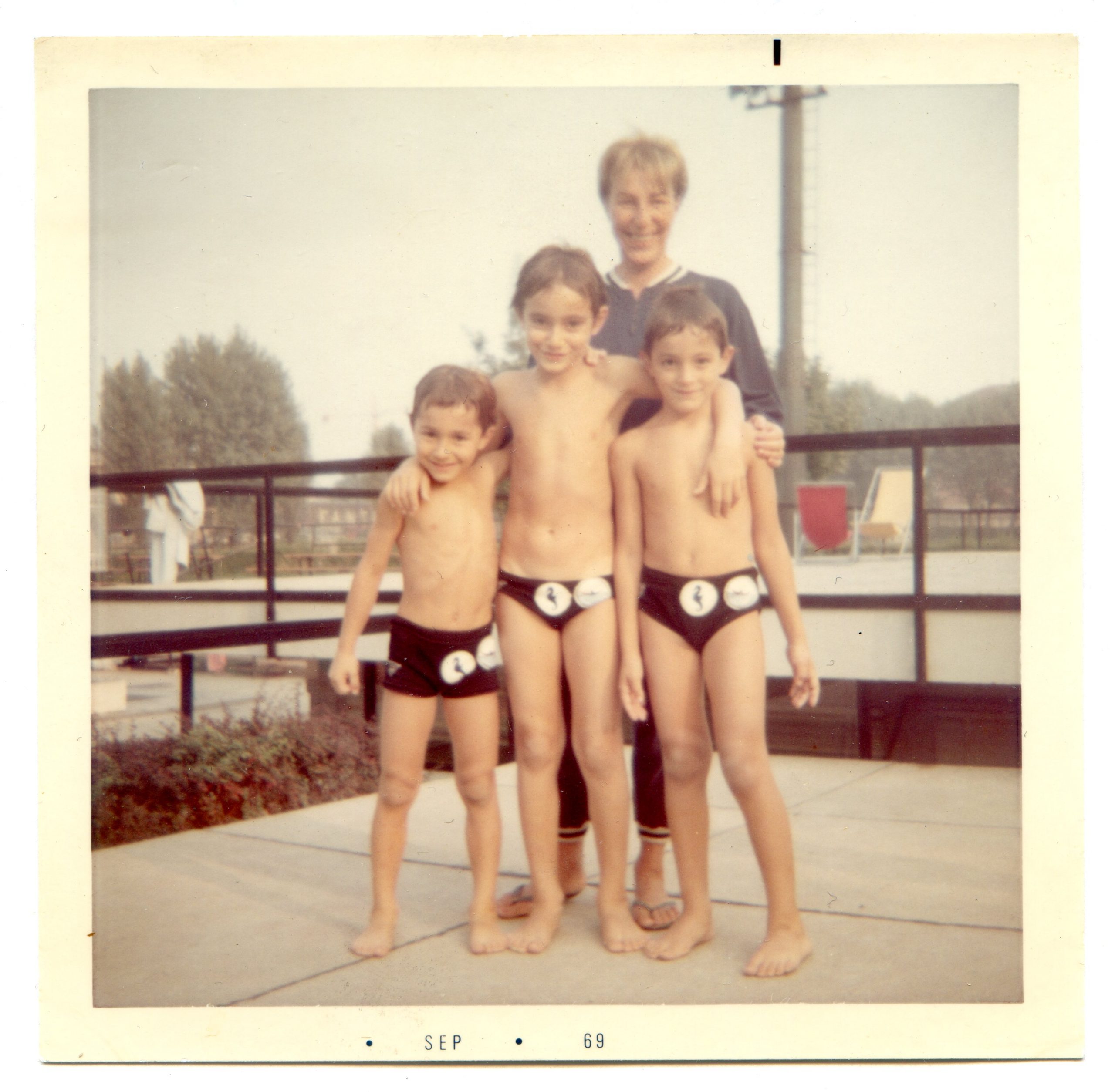 Swimming keeps you young – well not this young! Activist Sante Scardillo, center, in Milan with his brothers and a swimming instructor in 1969. (Courtesy Sante Scardillo)

A stroke of genius: Keep outdoor pools open through September

BY THE VILLAGE SUN | Unfortunately, there’s no such thing as an endless summer — not in New York City, at any rate.

Labor Day is traditionally seen as the end of summer, and it’s also the day at the end of which the city usually closes its outdoor pools.

But a hardcore swimmer from Little Italy is asking that the Big Apple at least keep some of its outdoor public pools open a bit longer during this virus-shortened season.

In just the past few days, Sante Scardillo has quickly collected more than 350 pool-goers’ signatures in support of the idea. On Labor Day he was at the Hamilton Fish Olympic-sized pool on the Lower East Side, where he netted 60 of those John Hancocks.

After that, he was planning to rush off to the Sunset Park pool in Brooklyn — one of his favorite spots to log laps — to gather more names, plus get in what could be his last swim of the season. He enjoys the Sunset Park pool because it allows lap swimming all day long.

Scardillo fired off the signatures to Parks Commissioner Mitchell Silver.

“They’re already in the commissioner’s mailbox,” he said, speaking on his cell phone from “Ham Fish.”

Scardillo also recently wrote a letter to Commissioner Silver, CC’ing Mayor de Blasio and local politicians, expressing his water-loving wish. The opening of the schools has been delayed, so the closing of the pools should be, too, he argued.

“It seems logical, that as the closure of pools has historically been linked to the reopening of schools, there should be a reprieve at least until Sept. 21,” the Little Italy lap swimmer said. “We are asking pools remain open for the entire month of September, hoping for good weather.”

There had been a rumor floating around that the pools would stay open through September, Scardillo said. But he hasn’t heard any update on that, and no one from the Parks Department has gotten back to him about his letter.

Scardillo wrote to Mitchell on Aug. 31.

Apparently on the same “wave”-length, four days later, Ginia Bellafante, in a column in The New York Times, urged that Gotham keep its outdoor public pools open through the end of September. She noted that back in the 1960s former Mayor John Lindsay, for one, was a firm believer that pools’ cool waters could cool down tempers and, thus, crime — something that’s sorely needed today in this summer of skyrocketing shootings and murders.

Normally, New York City opens its outdoor public pools on July 4, if not even earlier. But, due to the pandemic, pool openings were delayed for around a month, meaning the swim season was cut in half. Plus, less than a quarter of the city’s 53 outdoor pools were even opened this summer.

Scardillo, who tries to swim daily, has made the most of the month that the pools have been open, getting in the water as often as he can.

He’s also a member of the YMCA and enjoys swimming indoors there the rest of the year. However, of course, public and private gyms have all been closed during the COVID crisis. Gyms are now reopening — yet the Y has a phased reopening, with its pools slated for phase four.

But, in the words of a recent presidential candidate, Scardillo “has a plan for that.”

“I’ll be swimming with the sharks,” he said. “I’m going to Raritan Bay and take my chances. The water is a little murky. So, if something is below, I guess I won’t find out about it until it bites me.”

The trip out to Staten Island’s southern tip would be time-consuming, too, he noted.

“It’s my life,” he said of getting in his daily strokes in the water. “It’s like [going back to] the amniotic… . Some people get very competitive. For me, it’s total relaxation. Some of my best thoughts come to me when I’m swimming.”

In the past, the city has actually allowed the outdoor pools to stay open a bit past Labor Day. But in this COVID climate, who knows what this year will bring?

An artist, Scardillo is also a community activist. As he explained in his letter to Silver, his activism was birthed in the water, so to speak, in a public pool, in fact.

“In 1995, I unknowingly began my career as an activist,” Scardillo wrote. “Working with then-Parks Commissioner [Henry] Stern and the community of swimmers I had encountered at Hamilton Fish Pool (I was a complete neophyte), we extended the Morning Bird and Night Owl lap-swimming programs to Labor Day weekend, instead of terminating them in mid-August as had been customary. As of the following year, the change was made permanent systemwide, and thousands of swimmers continue to benefit… .

“In the quarter-century since, I have never stopped swimming daily, and it has radically improved my life in all sorts of ways,” Scardillo wrote.

“It has been a heaven from the stress and uncertainty of the current health crisis,” he continued. “It has meant the world to me and hundreds of other swimmers not only working toward reacquiring some sort of physical shape after months of lockdown, but also toward achieving the serenity and peace of mind that long-distance swimming brings.”

The virus has been hitting the city hard in the pocketbook, and that’s also no doubt factoring into decisions like keeping the pools open. But, as Scardillo pointedly told Silver, it’s “impossible not to notice the disparity” between the $1.45 billion being allocated for the razing and rebuilding of East River Park — which the swimmer slammed as a “boondoggle,” noting it’s being challenged in court — and the relative “paltry change” needed to keep the pools open.

And the pools would definitely continue to be used if they’re kept open, in his view.

“Given the present state of employment and the wider economy,” he wrote, “it is safe to say there would be plenty of bathers.”

As of Tuesday, Scardillo said he still had not gotten final word from Parks on the outdoor pools. He said it appears the city is planning to keep the public beaches open a bit longer, so, again, as he put it, he can “swim with the sharks” in the ocean. But he is still holding out hope that at least the Sunset Park and Hamilton Fish pools will be allowed to reopen.