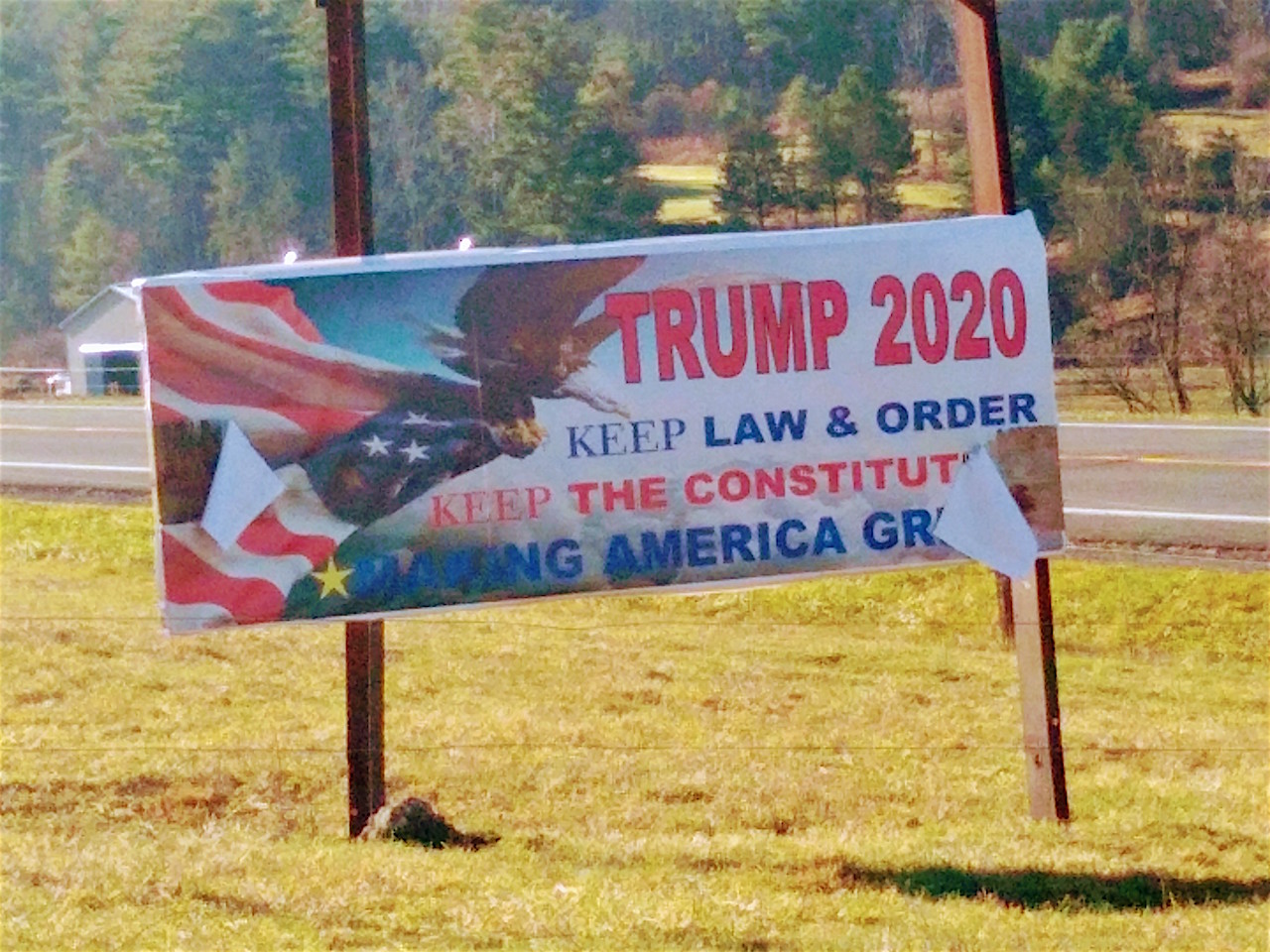 BY SCOTT OGLESBY | It’s a large sign, an in-your-face sign. A sign that I’ve had to look at in a meadow on the back road that leads to my house in Upstate Trump country. It’s been there for four long years now, and it’s still there a week after the election. Also, notice in the photo that the sign is peeled back slightly at both ends. A sure sign of someone’s impulsivity and lack of planning in their attempt to destroy it.

Taking a page from that never-published book by O.J. where he described how he might have murdered Nicole, let’s pretend that in a fever of Trumpian disgust after sharing bottles of champagne in celebration of the president’s electoral demise with my wife and two libtard friends, I had encountered this sign once more while driving to a bonfire for more celebration, and thought what appropriate fuel it would make for the fire; and then, succumbing to a fit of Faustian frustration and adrenalized exuberance, pulled over, doused the headlights, grabbed a flashlight and, ignoring the passing trucks on a state highway 50 feet away, most with filled gun racks, crawled under a fence and began ripping at said sign with Democratic fury.

But all of this was absurd, of course. It was just a desperately cathartic dream born from our long national nightmare. To be certain, I drove by the sign the following day and sure enough, its thick Naugahyde that stretched around a wooden frame was as torn as our national fabric. Evidently, the sign was like POTUS himself, hard plastic and tough to defeat.

If this attack actually happened, it must have been with the tacit approval of my normally clearheaded wife, sitting in our darkened car, looking up local hospitals on her phone. She must have been thinking what I was thinking — “Law and Order, my ass!” You gave us a crime-family takeover of the government that made fun of the disabled, killed climate treaties, scuttled world health, deregulated everything, appointed idiots and yes-robots, fired anyone with a brain, coddled dictators, caged children, pardoned war criminals, filled prisons with ex-cabinet members, revived white supremacy and changed the definition of liar to “someone casual with the truth” — a laid-back laxity on the way to killing a quarter million people.

If I had actually been the person who attacked this sign, you betcha I would have planned it better, given the risks involved. I’m too old to go to jail and not rich enough to defend a lawsuit. On the other hand, maybe a big show trial would provide a podium to expose all the dastardly plain-to-see evil that somehow half of America is blind to.

And then, after more thought, especially given the huge divisions the country is suffering, maybe this would be the perfect opportunity to stifle my anger. To put aside my four years of embarrassment at being an American. I would listen to the hurt that enables a fascist like Trump to take over hearts and minds. I could find out who owns that meadow with the Trump sign; I could drive over there, eat some patriotic crow and confess. Talk to the guy. I would apologize, tell him I want to heal our mutual pain, find common ground, I could… I could…….

Nah, I just ain’t ready yet.