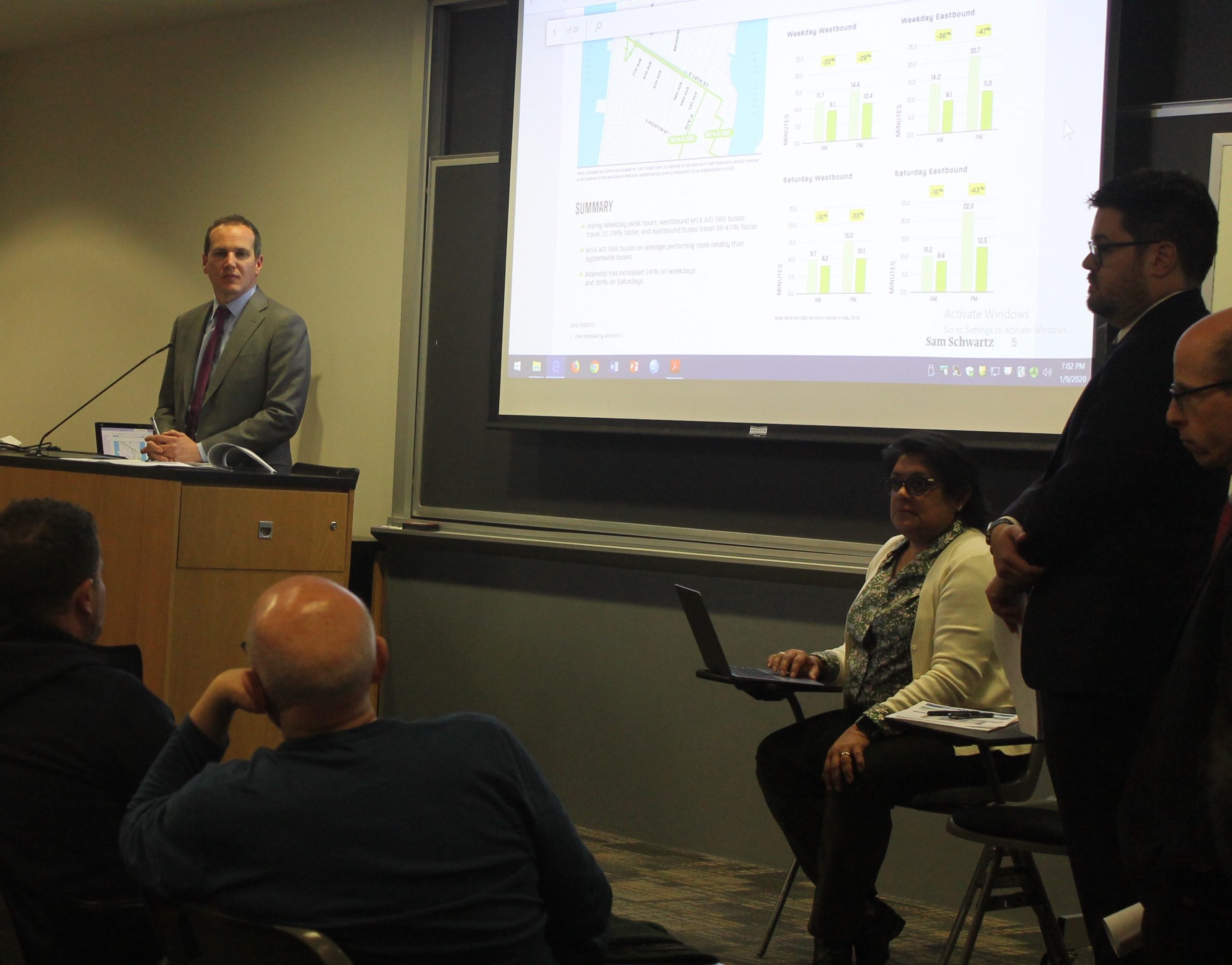 BY LINCOLN ANDERSON | There’s no shortage of complaints by residents about the new 14th St. busway. But noise and congestion caused by the “devil’s triangle” of the new transit scheme — centered around 12th and 13th Sts. and University Place — was the chief beef aired at a Community Board 2 meeting last Thursday.

A close second was people’s desire for taxis to be able to cruise the crosstown street to pick up passengers, the way they did before the roadway’s radical overhaul.

About 75 locals turned out for the meeting of the C.B. 2 Traffic and Transportation Committee. Representatives of the Department of Transportation, New York City Transit Authority and Sam Schwartz Engineering were on hand to present data from the busway’s first month, October, and answer audience questions.

The busway operates daily from 6 a.m. to 10 p.m. between Third and Ninth Aves.

Residents and agency reps alike noted that many cab drivers currently wrongly believe they “can’t go anywhere near 14th St.” without getting a ticket. In fact, they can, but — like all other cars — the drivers must take their first right turn off of the street. The agency officials said the Taxi and Limousine Commission would have to get the word out to cab drivers that they can go onto the street, albeit very briefly.

“You made University Place southbound, which is punitive,” one local resident complained to the officials. “We hear the horns.”

He was referring to how D.O.T., as part of the busway, reversed the direction of University Place between 14th and 13th Sts. Meanwhile, the rest of University Place still runs northbound. Eastbound drivers forced to take a right turn from 14th St. onto University Place must thus turn right onto 13th St., before they can somehow find a way to head back east again.

“You’re being punitive by making people go in a circle,” the man said.

He noted his wife had a medical emergency and it was impossible to get an ambulance into the area to pick her up.

Captain Erik Worobey, who is overseeing the busway’s traffic enforcement recently told The Village Sun that — with the reduction of traffic agents and police on the busway detail, often to zero — more car drivers on 14th St. were now heading straight past University Place instead of making the mandatory right turn, though would be getting camera tickets. He admitted that University Place initially had been a major problem. But judging by last Thursday’s C.B. 2 meeting, the traffic and honking have not noticeably tapered off, even with more cars flouting the right-turn rule at 14th and University.

Adding to the street congestion, residents complained, are a slew of parked police cars and vans attached to a homeless outreach unit newly based at the Police Athletic League building, on 12th St. between University Place and Broadway.

David Gentile, who lives on E. 12th St. near University Place, said the traffic from the busway modifications, plus all the police parking, has made the side street a nightmare for him and his family members who also live on the street. The buffer lane bordering the new bike lane —intended to double as a passing lane — is constantly used for parking, he noted.

“I have an elderly mom,” he said. “I have elderly in-laws. If someone has a heart attack and an ambulance can’t get in, y’all are going to hear about it,” he warned the officials. “We need a fix.”

“When will we get some relief at 13th St. and University Place?” another man pleaded.

However, a city representative answered that the city is not sure it’s “ready to make any modifications.”

Another resident said all the noise from the traffic is driving him to distraction.

“You can’t do work from home,” he lamented. “Your kids can’t do their homework.”

Residents demanded police enforcement against honking, saying signs should be put up warning of $250 fines.

A woman bemoaned that she no longer has curbside access where she lives at 12th St. near University Place, due to exactly what — the spillover traffic from the busway, the bike lane or the police parking — she didn’t specify. The traffic changes aren’t just tough on elderly residents, she said, but also on families with small children, and might force people to move away.

“I feel that I cannot raise a family in my current apartment,” she stated.

“I have personally witnessed a fire truck stuck, an ambulance stuck — it’s dangerous,” a man noted of the bottlenecks that residents say have plagued the area since the busway’s launch.

Leading the meeting, Ritu Chattree, the committee’s vice chairperson, at one point asked how many people lived on 12th and 13th Sts., and most of the audience of 75 people raised their hands.

“I’m not sure what the whole purpose of this plan is,” a frustrated resident stated. “At first it was for the L-train shutdown, which didn’t happen. Then it was for faster bus service. It seems to be a very drastic plan.

“I see the street [now] basically unused,” she continued, adding, “It is a major, major inconvenience to me not to be able to use a cab on 14th St.”

Local merchants have complained the busway is hurting them, too.

As one woman put it, “I actually live on the now-barren 14th St. at Fifth Ave. and I am watching businesses die.”

“It’s a wide-open playground for skateboarders and cyclists,” one resident scoffed of the once-busy crosstown boulevard, adding, “What will happen if a bus kills a cyclist?”

“Why not just put all the bikes on 14th St.?” a man offered to some applause.

Judy Pesin, a member of the 14th St. Coalition — an ad hoc group of Village and Chelsea residents who oppose the busway — asked what the process would be for cleaning snow and ice off the new bus-stop platform extensions. D.O.T. would handle it, she was told.

There were a small number of people in the audience who support the busway. One man ticked off all the street changes that had been made for the project and explained the positive attributes of each one, as if he were reading off all the talking points for the 18-month-long pilot project.

But the busway bashers — suspecting he was an advocate without a local connection — skeptically slammed his remarks with a chorus of “Where do you live?”

One audience member suggested red double-decker buses for tourists be banned from 14th St., saying everyone surely could agree on that. But one of the city officials noted the busway does not discriminate among types of buses and that they all can use the street.

A West Sider approvingly shared that now, with the faster crosstown bus, he can finally get his ice cream home from the Trader Joe’s E. 14th St. store without melting.

Bob Gormley, district manager of C.B. 2, suggested that D.O.T. simply allow cabs on 14th St. again and that would solve much of the problem for a lot of people in the room. But the answer came that bus-lane camera rules do not allow D.O.T. “to pick and choose” what kind of vehicles can be in the lanes — either you’re a bus or you’re not.

“I feel this conversation is under a bubble of a much larger conversation — the [100,000] Ubers out there,” a woman declared.

But one of the city reps responded that congestion pricing is eventually coming down the pike, so that should help.

Over all, the city and local politicians tout the busway for an increase in both speed and ridership of the M14. But residents at the meeting felt their neighborhood is being seen solely as a transit corridor, not as somewhere that people actually live.

“You are a success by what you’re measuring,” the woman who made the remark about Ubers said. “You’re not a success in terms of convenience to local residents. You’re not necessarily measuring everything that’s important.”