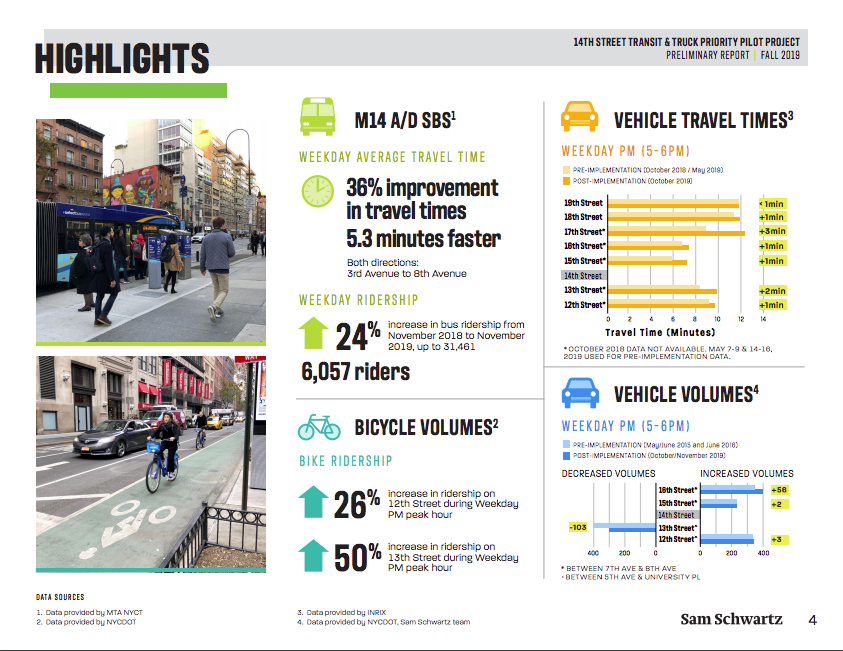 BY LINCOLN ANDERSON | A study of the new 14th St. busway — which only analyzed the plan’s first month of operation — showed that ridership on the M14 bus was up and, not too surprisingly, that bus speeds were up, too.

The figures were not just up, they “surged,” according to the independent study, by Sam Schwartz Engineering transportation consultants.

However, as police officers and traffic agents have recently been pulled off of busway-enforcement duty, more car drivers on 14th St. are flouting the initiative’s mandatory right-hand turn rule, specifically at University Place, a police captain told The Village Sun. This is easing congestion on 13th St. — but the drivers will be getting camera tickets, he warned.

And unimpressed residents at a meeting later that night shrugged off the report, saying faster bus speeds naturally were to be expected after cars were banned from the street.

Against the wishes of many local residents — some of whom sued to stop the scheme — the busway launched Oct. 3. The so-called “pilot project” is set to last 18 months.

Only buses, trucks and emergency vehicles can use 14th St. as through traffic between 6 a.m. and 10 p.m. All other vehicles — including deliveries and passenger drop-offs — must take the first right turn after entering the street.

The dedicated 14th St. bus lanes are enforced by a combination of D.O.T.’s cameras, plus NYC Transit’s cameras onboard M14 buses, which will issue warnings until January.

According to the Sam Schwartz analysis, in October, bus speeds from Third Ave. to Ninth Ave. were up to nearly 10 minutes faster, and ridership on the M14 was up 24 percent.

However, for drivers between 12th and 19th Sts., the trip took up to two minutes longer. Drivers on 17th St. saw the greatest increase — of up to 3.4 minutes — in travel time between Third and Ninth Aves, based on the data.

Meanwhile, 12th St. reportedly had a slight increase in traffic volume while 13th St. actually had less traffic in the busway’s first month.

In addition, cycling in the new protected crosstown bike lanes on 12th and 13th Sts. also increased in October — by more than 200 percent — the analysis found.

The busway’s impact on travel time on the avenues was minimal — or even positive — according to the data, with some avenues actually seeing an improvement. However, Third Ave. had increased travel times of 1.6 minutes.

The study compared traffic data for 14th St. from May 2018 to October 2018 versus October 2019, and is the first of several monitoring reports, including a final assessment, that will be done for the pilot project.

“It’s a new day on 14th St.,” de Blasio trumpeted. “We are getting New Yorkers moving and saving them time for the things that matter. The early results show that this pilot is speeding up buses while allowing for the car drop-offs and deliveries the neighborhood requires.”

Polly Trottenberg, the Department of Transportation commissioner, hailed the busway as no less than a “triple-win.”

“We at D.O.T. are proud that we could help provide thousands of New Yorkers with a triple-win: safer, more sustainable and faster transportation choices,” she said.

Trottenberg added D.O.T. would “continue to work with New York City Transit and the N.Y.P.D. to make traffic and operational adjustments in and around the pilot area as needed.”

Based on the study of the first month of the year-and-a-half-long pilot project, Andy Byford, president of NYC Transit, called for creating more busways.

“The 14th St. busway is wildly popular with riders enjoying 30-to-40-percent faster trips, and that should be replicated throughout the city,” the transit honcho declared.

Boosting straphangers’ speed even before the busway’s start, the M14A and M14D were switched, on July 1, to Select Bus Service, with off-board ticketing, plus the elimination of a number of bus stops south of 14th St., to the chagrin of local seniors and the disabled.

“After years of falling ridership, I’m thrilled that people are taking the M14 bus again in big numbers,” Johnson said. “I’m encouraged by the initial data and I look forward to working closely with D.O.T. and all stakeholders during the course of this pilot program.”

However, Epstein added, “I hope the M.T.A. can work with D.O.T. to continue making improvements south of 14th St., so that all riders in my district have reasonable access to the 14th St. busway.”

Powers called for possibly making the pilot project permanent — conditioned on the data supporting it.

“If these preliminary results continue, we should implement a permanent busway along 14th St.,” he said.

For his part, Village attorney Arthur Schwartz was skeptical of Schwartz’s analysis.

“His ‘before’ numbers are very suspicious,” he said.

Schwartz, a W. 12th St. resident, twice blocked the busway’s start, filing lawsuits against it on behalf of local residents. He currently still has an active lawsuit against the project.

Later on the same day that the mayor released the initial study’s findings, the Community Board 4 Transportation Committee held a meeting with agency officials, police and local residents to get feedback on the busway plan. C.B. 2 and C.B. 3 will hold similar meetings in January.

One resident who spoke was unimpressed by the faster bus speeds on 14th St., calling it a no-brainer since cars basically have been removed from the street.

There were also anecdotal reports that traffic on some Chelsea side streets has gotten worse in evening hours during the busway. One committee member confirmed that the board had specifically been getting complaints of more traffic on 15th St. on weekends around 8 p.m. and 9 p.m.

“On our block, it’s been a nightmare,” said a woman who lives on 16th St. between Sixth and Seventh Aves. “I work from home. There is so much traffic to being with. When you remove 14th St. — these people coming from the West Side Highway on the weekend, it’s party time — they can no longer come down 14th St., that’s the block they [usually] come down.”

Concerns about truck traffic were also aired: Because of the new left-turn prohibition on 14th St., trucks are reportedly using 16th St. (a non-truck street) to get to Sixth Ave.

Also, the problem of bus “bunching” persists, even under the busway, one resident noted.

“You’ll still find the bunching of buses — where they’re seven in a row — and then waiting 15 minutes [for another bus],” he said. “Eastbound is good, but westbound there’s bunching.”

Jeffrey LeFrancois, the executive director of the Meatpacking Business Improvement District, expressed concern about Chelsea’s side streets near the busway since the area simply gets a lot of car traffic to begin with. A years-long street construction project along Ninth Ave. is an ongoing issue, he added.

On the pro side, one 14th St. resident said he supported the busway and would like it to be officially branded a “greenway.” He said the newly bus-prioritized boulevard links popular tourist spots, including Union Square, the Meatpacking District and the “Pier 55 island.” In addition, a teenaged 14th St. denizen shared that the street is much less noisy at night now, so he sleeps better.

The issue of for-hire vehicles and cabs avoiding making drop-offs on 14th St. was also raised.

“I think what is happening is they think they will get a ticket We need massive education” about the busway regulations, a C.B. 4 member offered.

Meanwhile, Captain Erik Worobey, from the Transportation Bureau at One Police Plaza, explained that there was a 60-day grace period for ticketing associated with the busway, and that ticketing kicked in Dec. 2. (The mayor’s press release said ticketing would start in January, with warnings issued until then.)

Worobey said when the busway launched in early October, there were 54 people — a combination of traffic agents and police officers — assigned to 14th St. and surrounding streets for each shift to ensure the transit plan ran smoothly. Indeed, the traffic agents were ubiquitous and at night were highly visible with their glowing red wands.

He said that, at the busway’s start, police concentrated most on 12th, 13th, 15th and 16th Sts., since that was where local politicians had told police to focus.

However, with the move to camera enforcement, the number of cops and traffic agents on the busway detail eventually dropped to 16, and then lower, to the point that now there’s sometimes no one out there at all, the captain explained.

The captain told The Village Sun that, when the busway enforcement was at its height, 13th St. and University Place, in particular, had been a problem — and drivers were being frustrated. This was because the traffic agents were forcing eastbound drivers on 14th St. to turn right onto University Place, with the drivers then having to turn right again onto 13th St. since University Place runs uptown at that point; then the drivers would have to head back west over to Fifth Ave. before they could eventually make a left turn and head east again.

Now, though, with no traffic agents or police posted at University Place, car drivers are going straight through on 14th St.

“Thirteenth St. was bad, let me tell you,” the captain said. “We were putting people in a circle. Now the agents aren’t there, drivers are going right through — they’re moving faster, but they’re getting a ticket.”

Meanwhile, busway opponents are hardly toning down their criticism.

“Fourteenth St. is [now] a barren wasteland,” said David Marcus, a former steering committee member of the 14th St. Coalition. “Most times it is devoid of any vehicles — buses included. One can easily cross against the traffic lights with impunity, and many do, as there is no vehicular traffic to reckon with.

“It is a tremendous waste of a crosstown thoroughfare at the expense of surrounding side streets and avenues that are burdened by waves of traffic congestion — all to placate a vocal minority of transit advocates and to feed Trottenberg’s ego with a plan that is not justified by the facts on the ground.”

Elissa Stein, a 14th St. Coalition steering committee member, said, “Someone needs to be writing about the people living on 14th St. who are having trouble getting on and off the street and drivers who are terrified they’ll be ticketed if they drop people off. There are serious struggles going on and no one seems to care.

“I’ve noticed and been on empty-ish buses,” Stein added. “There’s still some bus bunching. We now have those bus bulb platforms being installed. Honestly, I think they’re there as a deterrent to cars.”

Asked for her thoughts on the busway, Maureen Remacle, president of the Sixth Precinct Community Council, also remarked on how empty the street is now — which does make it safer for pedestrians.

“I don’t know why they have traffic lanes if they’re not using them for traffic,” she said. “It’s great for me, I don’t have to look before I cross the street.”

She said when she’s walking in the Village and Chelsea, she has noticed that 13th and 15th Sts. appear to be more crowded with traffic.