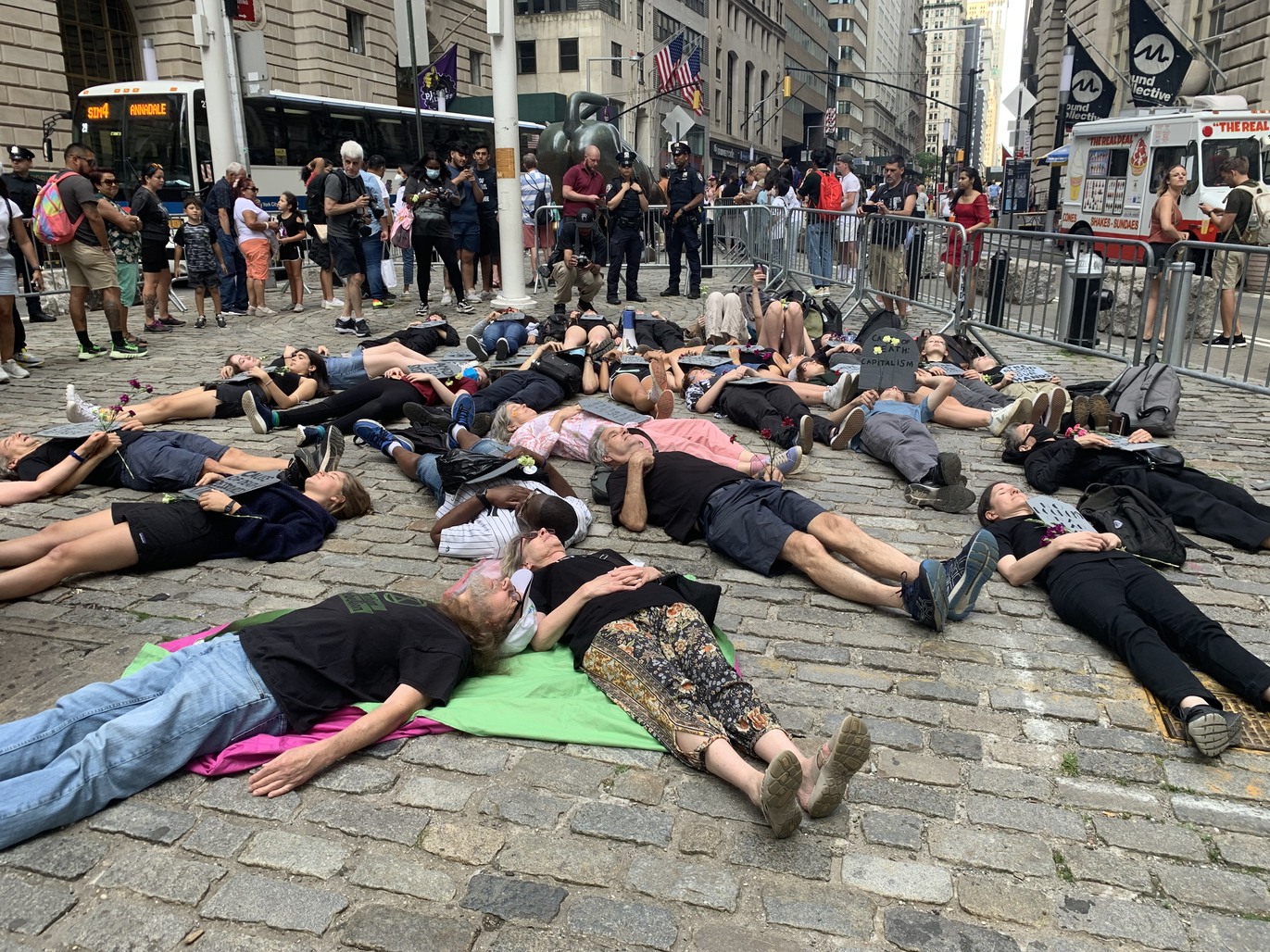 Young climate activists joined others in calling for banks to divest from fossil fuels, then staged a die-in at Bowling Green. (Photo by Carmo Moniz)

The worldwide effort followed a mass shooting at Robb Elementary School in Uvalde, Texas, on May 24, and another at a supermarket in Buffalo, New York, on May 14. March For Our Lives, one of the groups that organized the event, helped plan marches in more than 450 cities, including Washington, D.C., Dallas and Chicago.

“I believe it’s incredibly important as a young person to show our politicians and the rest of our country that we’re not going to go down without a fight, and we’re not going to stop fighting for change,” Kishore said. “I’m a student, and I think it’s terrifying that children should have to go to school and not know that they’re going to make it home at night, and I think it’s ridiculous that our politicians can’t stand up and make change.”

The crowd started in Brooklyn and marched across the Brooklyn Bridge to Lower Manhattan, where organizers and speakers gave speeches. Many carried signs with anti-gun-violence messages, such as, “Books Not Guns” and “This Is Not Normal.” Luis Hernandez, the co-founder and executive director of Youth Over Guns, shared his experience visiting Uvalde in the aftermath of the recent mass shooting and urged Congress to take action against gun violence.

“What we know is that gun violence is something that happens in our backyards every day,” Hernandez said. “Young children, Black children, Latino children, Indigenous children, too often are slain in our streets, slain in our schools, and so we must do better. Today, we must think about each and every young child that was murdered at Robb Elementary School, as children. We cannot dismiss their childhood. They were babies. They were slaughtered in their classrooms. That should not be normal.”

March For Our Lives partnered with Youth Over Guns, New Yorkers Against Gun Violence, the New York Civil Liberties Union, the United Federation of Teachers and many other groups to organize the march. Felix Tagger, the March For Our Lives New York State financial director and the march’s lead organizer, said that since the organization’s first march in 2018, more than 100 gun-control laws have been signed.

“Young people, you have shown that you can stand up to those who stand in the way of progress — individuals who put power over politics,” James said. “So we’ve got to stand together because we’ve got the power to change things in our nation. Every movement in this country, from a woman’s right, to civil rights, to gay rights, to transgender rights, to disabled rights, to voting for change for the environment, did not start with politicians. It was all of you young people,” she told the crowd, “young people who led, and politicians who followed.”

Mondaire and Maloney also spoke, both calling for a ban on assault weapons. The event ended with a chant led by Alliyah Logan, the Youth Over Guns director of programs and engagement.

The day before, on June 10, the New York City chapter of Fridays For Future — a youth organization fighting for climate action — organized a climate “die-in” at Bowling Green in the Financial District. Without permission from the city, a group of around 30 demonstrators lay on the ground in front of the park. They held gravestone-shaped posters and flowers in protest of banks investing in fossil fuels. Protesters stayed on the ground, “dying” for six minutes.

“We’re all really frustrated with these institutions. So we wanted to host this die-in to show what our future will look like if they don’t step up and stop funding the climate crisis,” Emma Buretta, one of the event’s organizers, said. “I hope the result of this die-in is that banks start to realize how their funding of the climate crisis is affecting youth, in particular. And that we’re going to take our money out of banks if they don’t stop funding the climate crisis, and they will not have business from our generation — and I hope that they feel threatened by that.”

The group called on many investment banks, including JP Morgan, Chase, Black Rock, Wells Fargo, Citibank and Bank of America, to divest from fossil fuels. Mars Vazquez-Plyshevsky, another organizer of the event, said that though they do not think the die-in will cause banks to divest, it’s part of a larger effort to pressure lawmakers to act against bank investment in fossil fuels.

“There are people who are currently experiencing the effects of climate change, really directly,” Vazquez-Plyshevsky said, “of course, people in the global south but also even in New York City. We’ve had historic flooding, we’ve had once-in-a-century flooding three times in the last two decades. We’re not supposed to get that kind of stuff in New York, and that’s clearly what’s happening. So it’s already happening — we don’t have much time.”