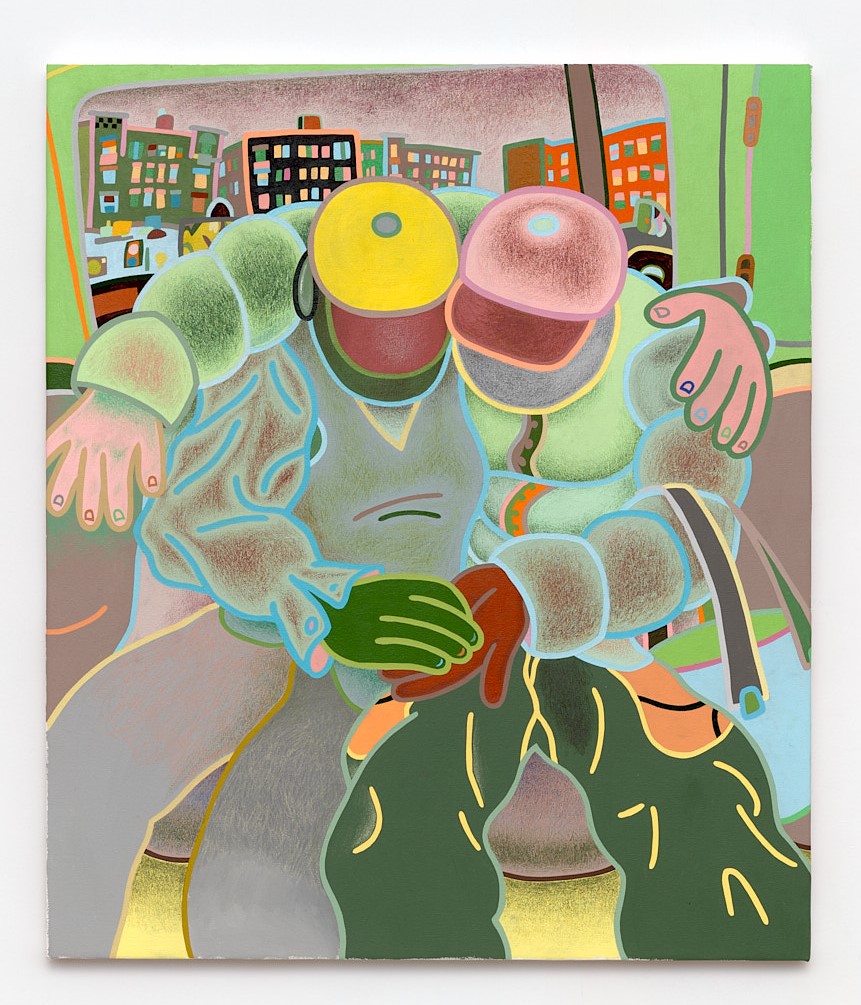 BY STEPHEN DiLAURO | The current exhibition at WHAAM Gallery in Chinatown of two young first-generation Americans is a fascinating exercise in juxtaposition of styles, color palettes and subject matter. Somehow it works.

Sylvain Munoz, whose father hails from Colombia and his mother from France, maintains a sustained painterliness in his compositions. To suggest that his choices of subject matter are strange might be an understatement.

“There’s not really an attempt on my part to put emotion into my paintings,” Munoz said. “It’s about spectatorship, and objectivity and what’s really going on in this society where we live.”

Who, really, can know for sure what makes another person happy, in the privacy of the home? Identity can be a source of public pride and social-media posturing for some. For others, secret pleasures in the domicile are enhanced by presenting a buttoned-down facade in public. One never knows for sure, do one?

In another, smaller canvas, Munoz presents a Japanese crucifixion, with two Moorish kings totally out of context but enjoying the spectacle. It is a reminder that crucifixion was not a holy event but a public execution, usually reserved for society’s worst offenders.

Munoz’s day job is as a fashion model for the likes of Louis Vuitton and other high-end fashion houses. So maybe it’s not surprising that he paints commissions on the backs of jackets for rock stars and other high-net-worth individuals, in the mode of Janusz Gilewicz.

Sylvain Munoz attended mortuary school in order experience anatomy firsthand. He described one small vignette of a partial human head, which is in the show, as a diary-like composition created after his first day of class in a morgue. His will be a career well worth following.

Jairo Serna, the other artist in this exhibition, seems a natural heir to Keith Haring and Kenny Scharf. His big, bold compositions are peopled with exaggerated human forms with diminished identifiable facial features. He’s also of Colombian descent.

Serna’s works are part painting and part tapestry rendered with a pastel palette. He developed his own process, “which involves cutting up pleather into individualized shapes.” He then paints the shapes and glues them onto fabric in an almost mosaic-like fashion. The results have a texture and cultural context that energizes the painter. He finds himself drawn “back to the process time and time again.”

Gallerist and curator Anatoly Kirichenko began WHAAM as a cultural club devoted to promoting various New York City subcultures that produce their own brand of literature and visual arts. WHAAM has hosted monthly book talks since 2017. WHAAM’s physical space is located in the back right corner of the mall-like assemblage of shops at 15 Elizabeth St., just south of Canal Street.

The exhibition of art by Munoz and Serna is on display until July 3. The gallery is open Thursday to Sunday, noon to 6 p.m., and other times by appointment. Call 917-445-0194 for further information or to make an appointment.

DiLauro is a playwright and critic. Installments of his Bohemian Times Gazette are available at bohemiantimes.substack.com.